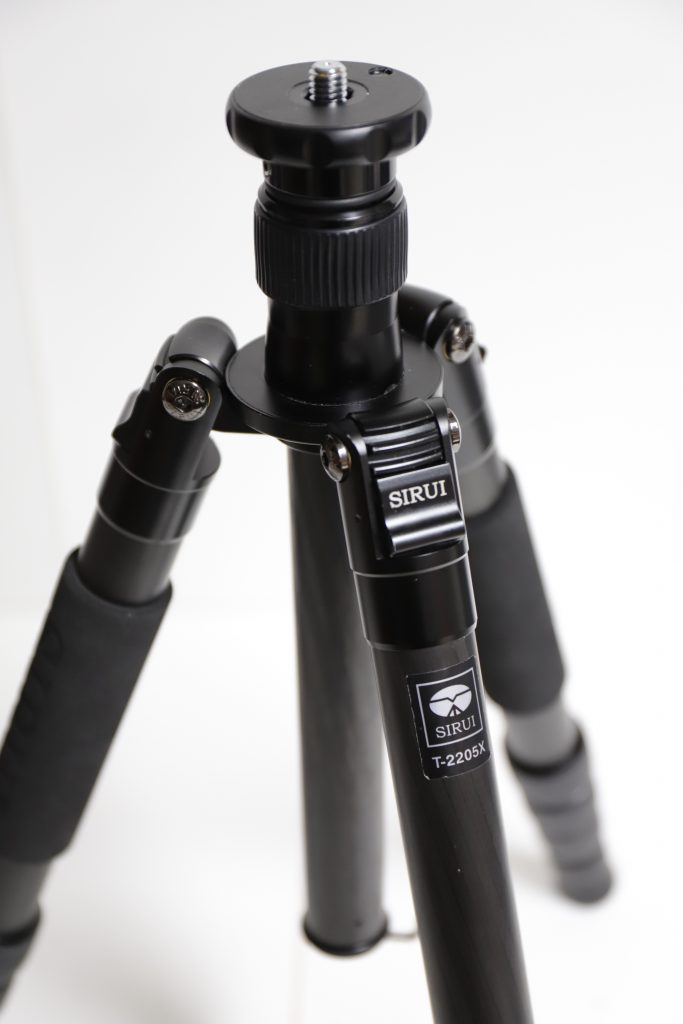 The “T” in the name of the Sirui T-2205X stands for “Traveler”, as this is what the line of tripods was designed for.  The T-2205X is the largest of this line and is the tripod most applicable to general purpose photography.

The specs clearly place this in the travel tripod category.  It has a fairly low weight and small folded length and volume.  As with most travel tripods, the maximum height without using the center column is too short for most people to look through the camera viewfinder without bending over.

The feature set of the T-2205X is fairly standard.  It has leg angle selectors that pop out via a metal tab so that the legs can be set to one of three angles.  The tripod also features a center column that locks down with a traditional twist lock.  Included with the tripod is a short center column to be used for ground level work.  However, this requires carrying another piece around with you, and then some tedious reassembly of the tripod when you want to use it.   The tripod also comes with a nice enough carrying case, which is helpful for carrying around and not losing your short center column.

Like most modern travel tripods, the legs of the T-2205X will fold up and back on themselves, cradling the head and creating a compact package for travel.  The advantage of this setup is primarily in having a short folded length (think carry-on baggage) and not so much in terms of total packed volume.  Whether this feature is valuable to depends on what your constraint is. 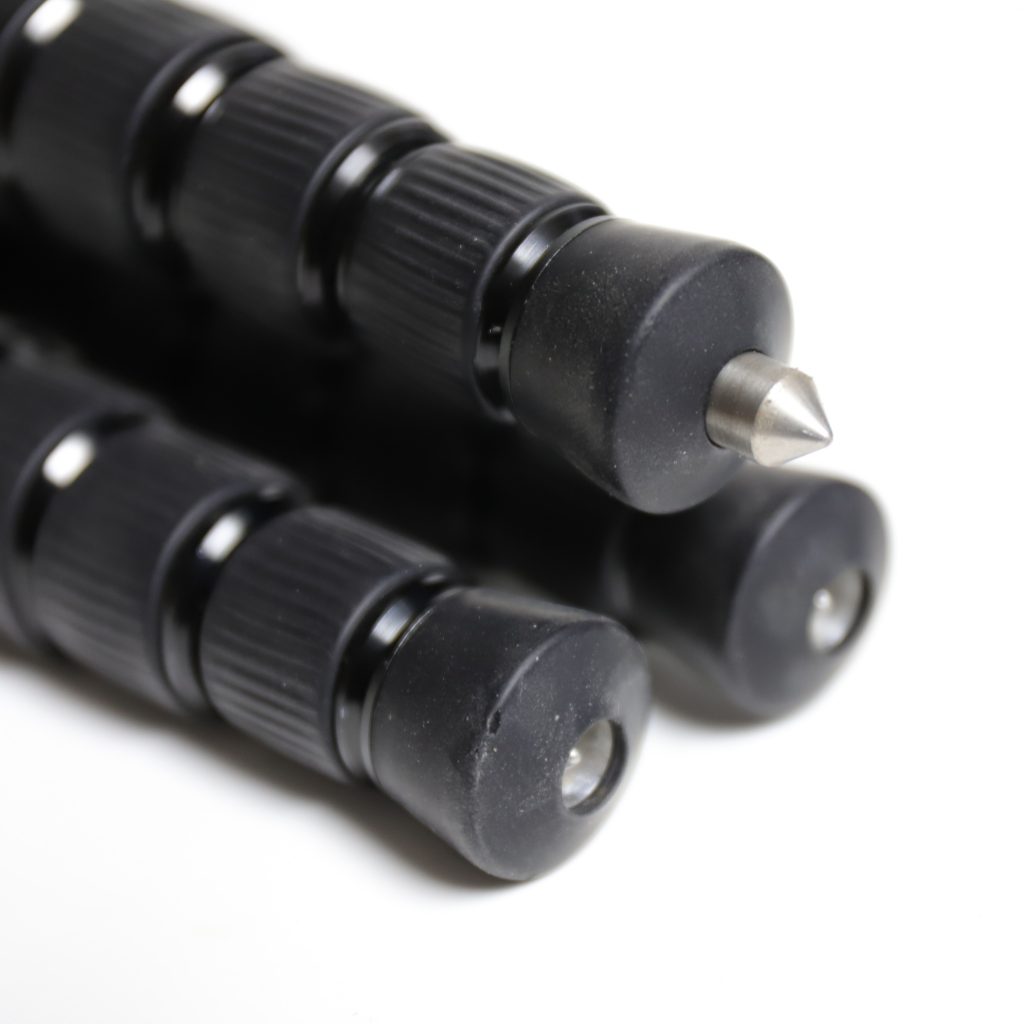 The T-2205X has built in spiked feet.  By turning the rubber foot, a small stainless steel spike extends from a hole in the center.  While convenient, I dislike this design.  It makes the whole foot assembly less secure than the more standard feet that can screw into the bottom via 1/4″ or 3/8″ threads.   The small spike also doesn’t do much on loose surfaces such as sand, where you would want a full size spike anyways.

The T-2205X handles well.  It closely follows the modern design of twist locks and ratcheting leg angle mechanism, which is a good one.

The Sirui is a little slow to setup due to having five leg sections and the reverse folding design.  It took me roughly 25 seconds to get the tripod setup from a fully folded state.  Pulling the legs down, then loosening and tightening each of the five leg sections, and then lowering the center column takes time.  Five leg sections is too many for me to loosen with one single twist of my hand.  For comparison, it takes me roughly 10 seconds to setup the RRS TFC-14. 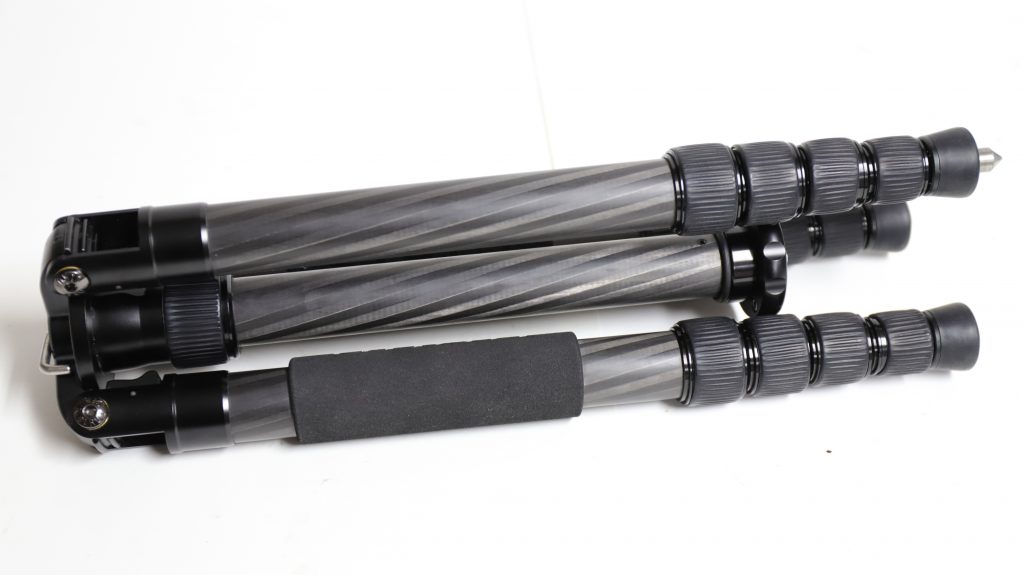 The build quality is entirely reasonable.  I didn’t encounter any problems that would present a threat to reliability.  The feel of the metal components is good, but not to the same level as the high end tripods.  My biggest complaint is that the rubber grips on on the twist locks are free to rotate about the underlying piece of metal.  This doesn’t present a problem for usability, but it lends to a cheap feeling when in use and the rubber grips are slipping around a little bit.  You can see in the photo above that the rubber grips are all at slightly off angles after the tripod went through my test regiment.

The stiffness is okay, and is generally in line with what we have seen from other travel tripods at this price point.  In this data we are seeing the consequence of some of the design decisions.  The choice of five leg sections makes the tripod slightly more compact, but also less stiff.  The leg opening angle of 22.5 deg is narrower than the standard of 25 degrees.  This tends to hurt the axial stiffness but help the radial stiffness and the Sirui here is not exception.

The Sirui T-2205X is a generally acceptable tripod.  There is nothing particularly offensive about its design, build quality, handling or performance.  But this goes both ways.  There is nothing exceptional either.   It is pretty similar to other travel tripods at its price point except for being slightly smaller and lighter.  If we step out of the price point though, the Sirui gets completely outclassed.  Instead of trying to check every box, I wish Sirui had been more bold with their design and used four leg sections, thrown out the short center column and carrying case, used fixed rubber feet, and then applied those cost savings to higher quality carbon fiber.  Then we would could get excited.

The Sirui T-2205X is for you if you are shopping for a travel tripod that can do everything on a budget.  It is slightly more compact when folded and lighter than its direct competitors, though it is also slightly less stiff.