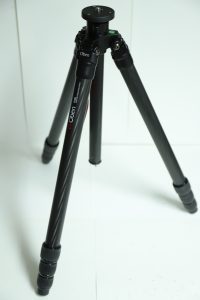 The CT-2491 is the largest of Oben’s tripods.  These tripods have a knack for being some of the lightest available at their height, but not particularly stiff.  Hopefully as the largest tripod of Oben’s CT line, this one will buck the trend due to its larger diameter tubes.

The lack of weight for the height is notable.  This is the lightest tripod I am aware of at this height, and includes a center column for more height if necessary.  Naturally, tripods that tend to do well on a height per weight metric tend not to have a center column.

The features on the CT-2491 are pretty standard.  It has a center column that (mostly) locks down with a twist lock.  The legs spread independently and the angle stop can be set to three different settings via a pull tab.  The head platform can be disconnected from the center column to allow the tripod nearly all the way the ground.  The only problem here is that doing this requires unlock a set screw with a hex.  If you don’t have the hex on you, say in the field, you can’t take the center column off without damaging the column.

The feet on the CT-2491 are unfortunately of the type that twists to reveal a small spike.  This is the worst of both worlds in that the rubber foot doesn’t secure very tightly against the leg and the spike is too small to be very effective.  I prefer a tripod that has a simple rubber foot or standard thread for switchable feet. 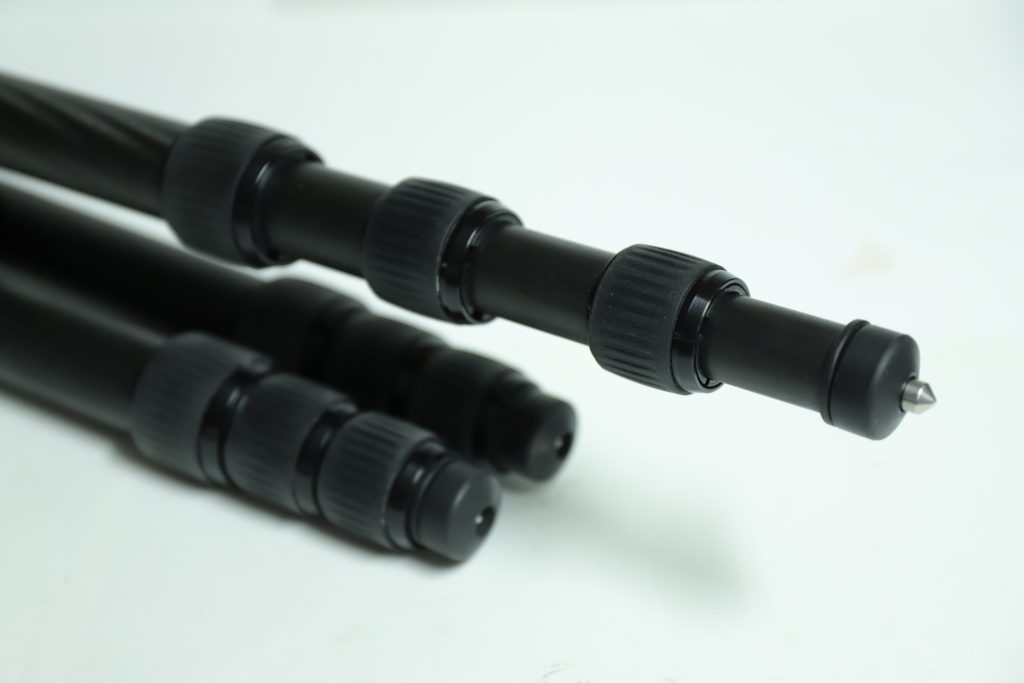 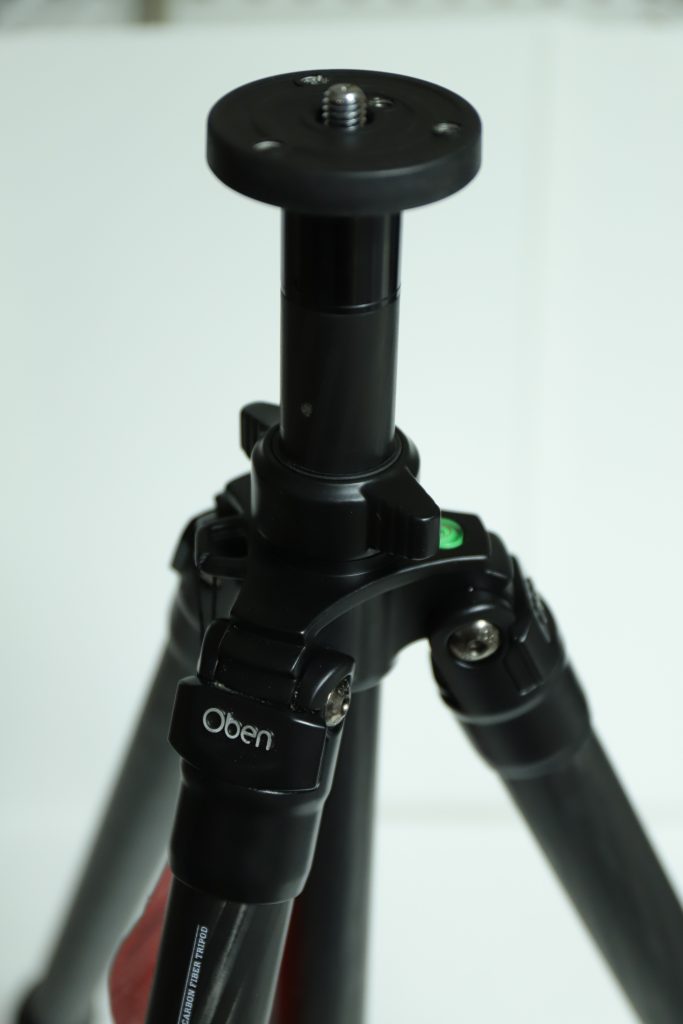 The ergonomics of the CT-2491 are acceptable, but not outstanding.  Like many tripods, the rubber grips on the twist locks aren’t tight enough not to slip around a bit and move to be slightly offset.   As hinted to previously, the center column doesn’t lock down fully enough to prevent the center column from from rotating a bit when the lock is fully screwed down.  This doesn’t seem to have a big impact on performance, but it is somewhat disconcerting.  The first is problem is a quibble, this second one is an issue that the manufacturer needs to address.  Aside from these though, the tripod operates smoothly and without issue.

The build quality of the CT-2491 is strikingly similar to a number of other tripods that all seem to come out of the same of the same factories in China.  That is to say, acceptable, but not outstanding.  The metal bits appear to be coated in some way as opposed to properly anodized.  The carbon fiber tubes are clearly of a lower quality, like most tripods at this price point.  There is nothing really wrong with the build quality here, but there isn’t anything really great either.

These stability numbers are rather disappointing for a top of the line tripod.  The stiffness is closer to what we expect from a travel tripod than an all purpose one.  This is despite having respectably large diameter legs.  There must be a weak link somewhere.   As seen from the stiffness vs height results, this weak link is most likely not the center column clamp.  If it were, the stiffness vs height curve would look pretty flat and vary a lot less with the leg extension.  Perhaps the twist locks are poorly designed, but more likely is that the leg tubes are made of a poor quality carbon fiber.  This wouldn’t be a shock, since most carbon fiber used at this price point is of poor quality.  I measure the leg tube wall thickness at 0.034″.  This is also thinner than most tube walls, so this doesn’t help. 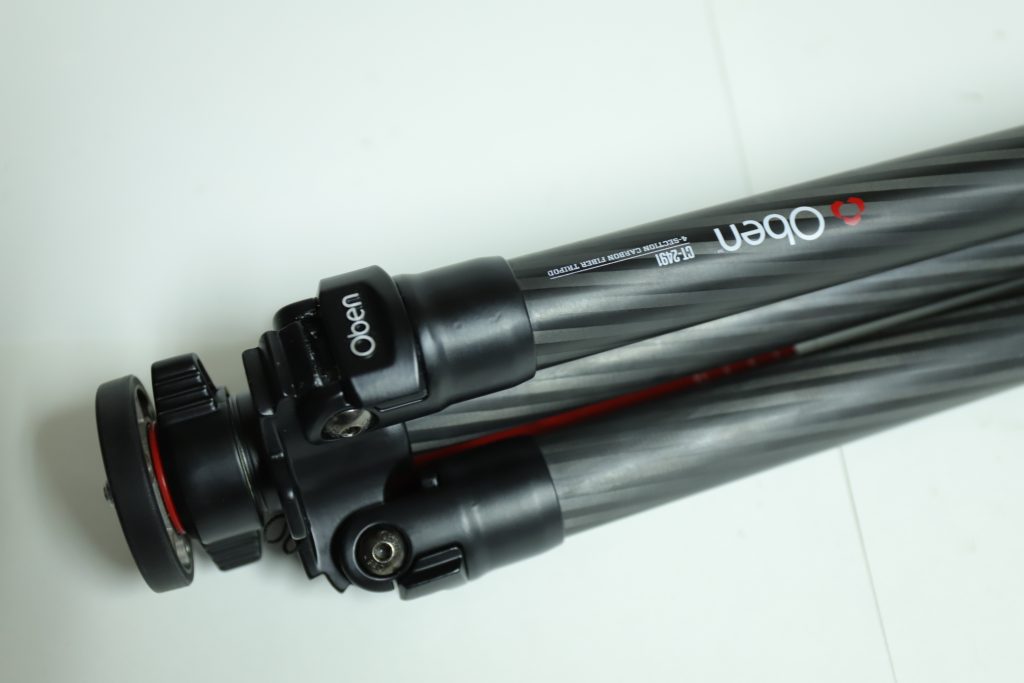 The Oben CT-2491, like the rest of Oben’s CT line,  feels like it was born as a tripod to meet specs.  Its as if they set out to build the tallest, lightest tripod available with all the modern features present in a Gitzo Mountaineer.  In that, they have succeeded.  Unfortunately though, the result isn’t particularly stiff.

The Oben CT-2491 is for you if you want a tall, light tripod on a budget.  If you need good stiffness as well, you are going to have to find a heavier one or shell out the big bucks for a high-end tripod.