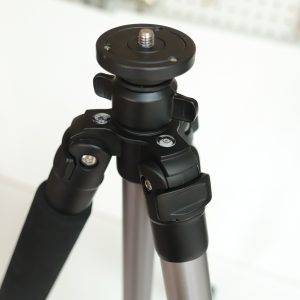 The Amazon Basics tripod is just about the cheapest full size tripod available with a brand name, albeit one that isn’t known for making tripods.  Amazon certainly doesn’t design their own tripods, but rather rebrands some off the shelf design coming

from China, which is most likely a knockoff of one of the major brands.  There are several Amazon Basics tripods, and the one I am reviewing here is the aluminum “70 Inch” one.  Included is a joystick style head that is a clone of the ones Manfrotto used to make before everyone realized how unstable they were, and the grip was switched to the side.  Here I am going to be primarily reviewing the tripod legs.

The standout specification for the Amazon Basics 70 Inch tripod is clearly the price.  It is absurdly cheap, to the point I cannot help but marvel how it is possible to manufacture and ship it to my door for $65.

There are no particularly notably features on the Amazon Basics 70-Inch tripod.  It has a center column with a standard twist lock.  The legs can be set to three different angles using pull out tab like most tripods.  Two of the legs are covered in a cheap neoprene that feels like it will disintegrate over time.  It does keep your hands from having to touch the cold metal though.  A bubble level and a compass adorn the spider.  I’ve never seen a compass on a tripod before and cannot really imagine the thought process behind that one. 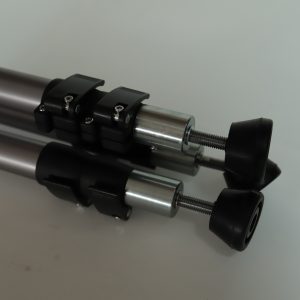 The feet are unique.  A 3/8″ bolt extends out of the bottom of the legs around which a set of rubber feet can screw up and down, revealing a spike.  I tested the tripod with the rubber feet gripping the floor, which is optimal for my concrete floor test environment.  This design works, but it looks and feels really bad, like it was hacked together as a freshman shop project.

The tripod handles acceptably in use, but is noticeably rough around the edges.  The aluminum tubes that make up the legs are clearly not manufactured to a tight tolerance as the resistance changes significantly along the length of the tubes as they are retracted.  The feet also tend to come loose and make their way back up their bolts, which is an annoyance.  The leg locks do secure the legs, but feel flimsy.  All that aside though, the tripod handles well once set up and provides a decently rigid platform upon which to mount a camera.  Anyone whose budget for a tripod is $65 should find the stability perfectly adequate.

This tripod is big and heavy though.  It is for mounting a camera to film your kid’s school play, not for taking on vacation.  It is in its element a short distance from your car or your closet.  There are plenty of good reasons to need a big heavy tripod on the move, but if that’s the case, this isn’t the one you want.

The fit and finish on this tripod is poor.  The leg locks are flimsy.  Again with the feet.  The components all have noticeable seams from being cast.  The top components are finished in a way that makes one unsure whether they are plastic or metal (they are metal).  There is no pleasure to be found and using and handling this tripod in the way that a Gitzo or Really Right Stuff tripod can incite.  The lack of attention to detail raises concerns about the reliability of the unit as a whole.

These numbers aren’t too bad for a cheap tripod.  The heavy construction and decently large aluminum legs make for acceptable stiffness numbers.  The damping is quite good for an aluminum tripod, probably due to the rubber platform feet and use of plastics in the construction.  In terms of stiffness to weight ratio though, the Amazon Basics Tripod ranks dead last among tripods that I have tested so far.  Also note that these tests were done without the included joystick style head.  These heads are notorious for being unstable.

If you need a tripod to travel with, carry any significant distance, or rely on for an important shoot, look elsewhere.  The Amazon Basics 70 Inch Tripod is for you if you need a reasonably stable tripod a couple times a year for non critical work.  It can hold a camera with a short to medium telephoto lens steady.  So if you need a tripod that can sit in a closet until you need it for a family picture, or to film a party, and don’t want to spend much money, this is a great option.

Please support this site by using the affiliate links.  All funds are used to purchase more tripods and heads to test.