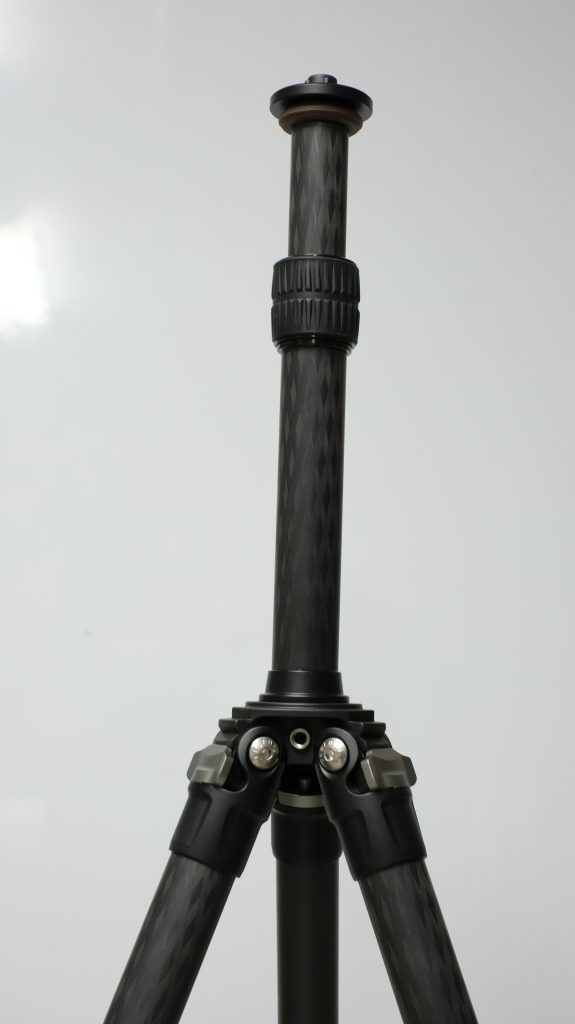 Design.  The LS-284C features no center column, and has no ability to install one in the traditional way.  If a center column is important to you, this isn’t your tripod.  If you don’t need a center column, the LS-284C takes full advantage of the design freedom that such an omission facilitates.  The apex is just large enough to provide a platform for the head and to bolt the legs too.  The legs fold up on themselves tightly, eliminating the negative space caused from trying to fold up three tubes around a central one.  The result is tripod that is very light for its size and stiffness, a recipe for success in my rankings.

Build Quality.  For a tripod at this price point, the build quality is excellent.  The metal parts are made from anodized machined aluminum.  The fit, finish, and feel are thus vastly superior to the molded aluminum components featured on most other tripods made in China.  That said, I have experienced some minor quality control problems with Leofoto.  On this particular tripod, one of the twist locks was chipped.  On a different model,  the pull tabs were quite stiff.  Leofoto doesn’t offer support for their products, and while they claim to offer a 10yr warranty, it is illusory.  In most cases, the cost of the shipping back to China for repair would be prohibitively expensive.

Center Column.   Despite espousing at length above on the benefits of removing the center column, the LS-284C includes the screw-on center column, so we should discuss it.  It is a two section post that screws onto the top of the tripod.  The height is adjustable, but only by adjusting the one section.  There are advantages and disadvantages of this setup.  The upside is of course that the tripod is small and compact when the center column is removed.  Secondly, the center column is thicker than most, and I would expect the resulting loss of stiffness to be less than average of center columns.  That isn’t to say the loss of stiffness will be negligible though.  I haven’t done precise tests, but it is noticeable.  The disadvantage is of course that to fold the tripod up, the center column (and head) must be unscrewed from the top of the tripod.  This gives you two things to keep track of and store while on the go.  It isn’t so simple as to just strap the tripod to the outside of the pack.  Because of this, I expect most people will be leaving the center column extension at home.  Its a cute idea, but not entirely practical.

Leg Locks.  The leg locks are of the standard twist lock type.  These do their job perfectly well, but are not manufactured to the same precision we see in some of the top brands.  There is a touch of play in the lock when it is loose.  There is no rubber gasket to seal out water and dirt.  While this isn’t a common feature, it is slowly becoming standard.  The rubber coating on the leg locks provides good grip and doesn’t slip around over the metal underneath.  The rubber is a bit softer than I prefer though.  This doesn’t affect the performance, but tends to attract dirt and feels a bit cheap. 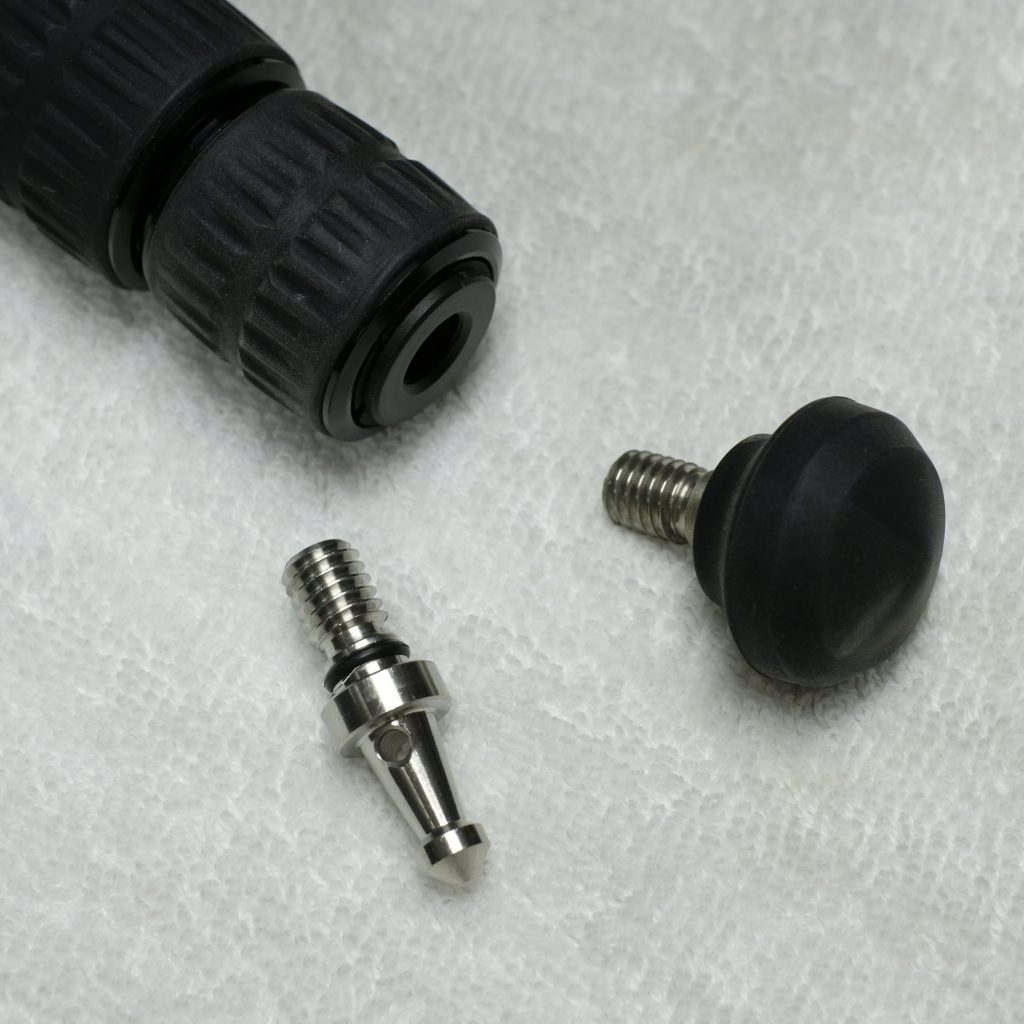 Feet.  Two types of feet are included with the tripod and both can screw into a 3/8″-16 threaded metal cap at the bottom of the legs.  The first is a set of rubber feet that are useful on almost any type of surface.  The rubber is beveled to match the three different leg angles possible.  This is great until the tripod is used on any sort of uneven ground.  It doesn’t hurt, but clearly there is no benefit either.  The second set of included feet is a set of spikes.  Spikes are great for loose ground such as sand or snow.  Unfortunately, the spikes included here are less than 1″ in length, and so don’t do much in situations where you really want to be using spikes.  These spikes are nice for soft dirt and grass, but the rubber feet work perfectly fine here.  The spikes will most likely just live storage.  Leofoto makes a set of real spikes that they will happily sell you as an accessory. 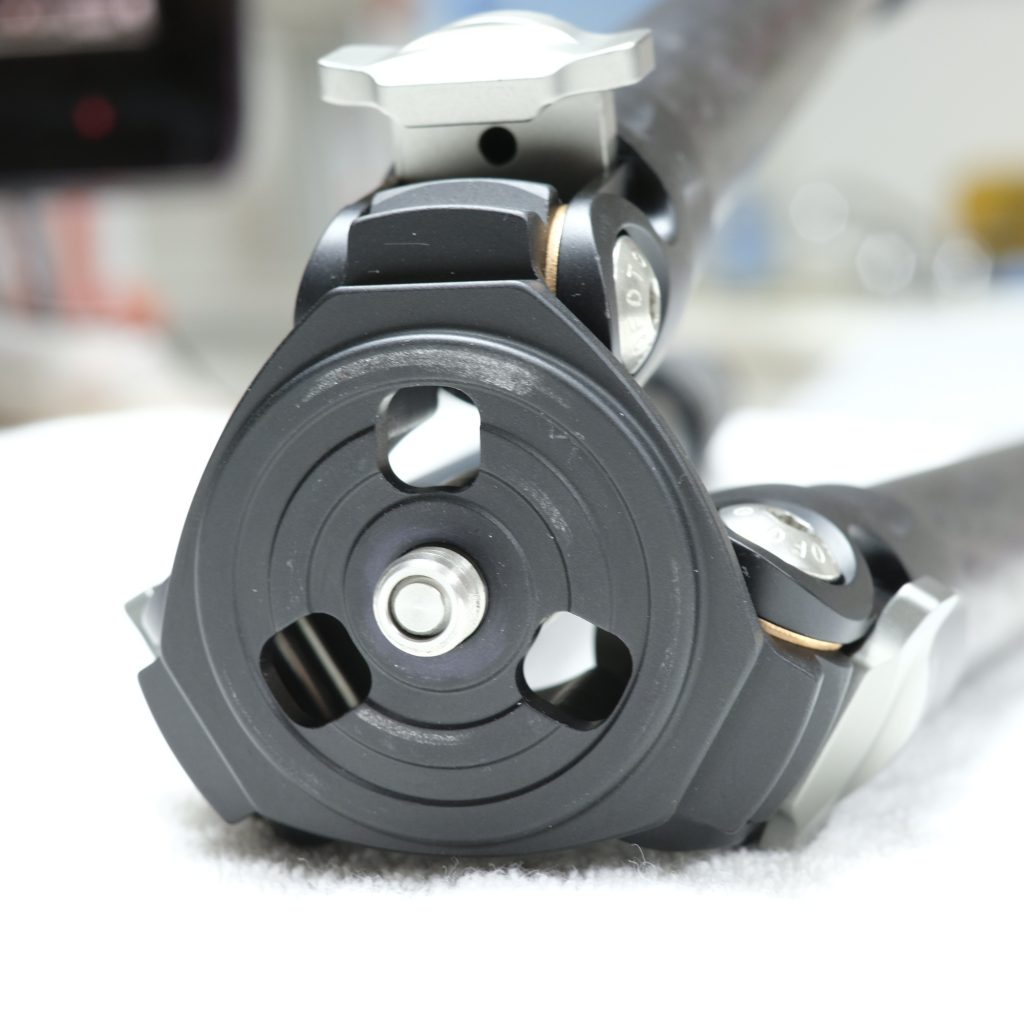 Top Plate.  There is no exchangeable top plate or center column on the LS-284C.  The head just screws down onto the bare metal of the apex.  Most tripods have some sort of plastic or rubber pad between the apex and the head, which both protects the metal bits from wear and improves the damping characteristics.  The damping on the LS-284C is acceptable reasonable regardless, so the pad clearly isn’t necessary from this perspective.  Be aware that you may wear the finish off of the top plate over time, but this is harmless to everything except aesthetics.  The image of the top plate shows the wear from just a handful of head changes. 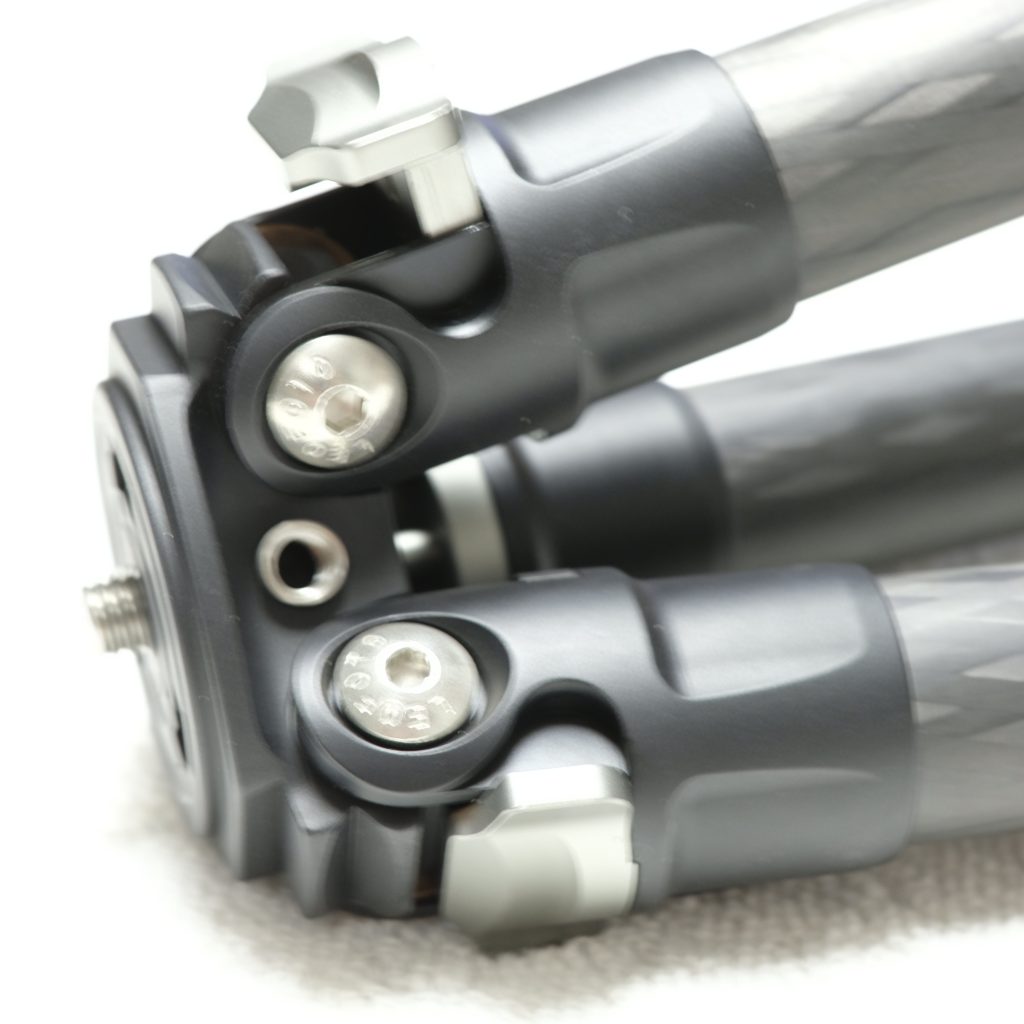 Angle Selectors.  The LS-284C features the standard pull tab angle selectors.  These pull out to allow for an alternate angle stop to be selected, then snap back into place.  Unlike on some other Leofoto tripods I have tested, the angle selectors function smoothly and without issue.  There is likely a quality control issue here for, so if you get one of these tripods, make sure that these function to your satisfaction.  The actual hinges on which the legs rotate are too stiff on this particular tripod.  It takes much more force than it should to pull the legs apart.  This can likely be solved by loosening the bolt, but I test the tripod as it comes out of the box, and Leofoto doesn’t use the highest quality thread locker.  This hasn’t been an issue on other Leofoto tripods I have tested, so again, probably a quality control issue here.

Carbon Fiber Quality.   The carbon fiber quality used on the LS-284C is the same as used on all Leotofo tripods.  The claim is that the tubing is made from ten layers of Torayca carbon fibers.  This sounds good on its face, but in practice doesn’t mean much.  More important is the fiber to resin ratio, layup of the fibers, and modulus of the fibers used, none of which is publicized.  Our primary indicator for the quality of the tubes used is then the stiffness of the tripod.  From our experience with Leofoto tripods, we see that the tubes are good, but not exceptional quality.  They are decidedly mid-range.