When selecting a head, one wants to pair the legs with a head that will not compromise the stiffness of the system as a whole.  On the other hand, a head that is too big adds diminishing performance increases and just adds weight.

Below is the optimization result for selecting a ball head.  This chart plots the stiffness to weight ratio for this tripod and each ball head that I have tested in blue dots versus the stiffness of those heads.  The red line is a generalized model for a strong performing ball head. The higher up on the this graph the higher stiffness/weight performance of the system.  More information on this analysis can be found in the ball head choice optimization page. 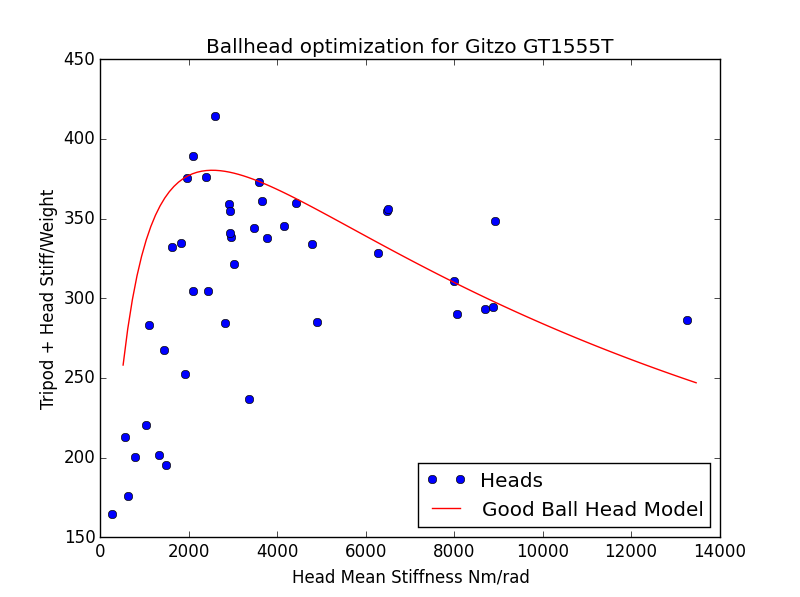 This chart is telling us that we want a ballhead with a mean stiffness of at least 2000 Nm/rad in order to not compromise the performance of the tripod.  Once we get above 4000 Nm/rad in head stiffness, the increase in performance from the head doesn’t help and the additional weight of such heads is wasted.

Note that these recommendations are limited to the tripod heads I have tested.  The more general discussion above should provide adequate guidance if your head of choice is not listed.

Really Right Stuff BH-30:  Usually there are a number of heads that all work pretty well for a given tripod.  For the GT1555T, the RRS BH-30 is easily the best choice.  It is the right size and stiffness to comfortably pair well with the tripod legs.  The build quality is top notch and it is slightly cheaper than the Gitzo head.

Really Right Stuff BH-25:  The RRS BH-25 actually performs a little bit better than the BH-30, is cheaper, and lighter.  Purely in terms of stiffness/weight ratio, the BH-25 is the optimal head for the GT1555T.  However, there is not panning function and the BH-25 is a bit too small to have comfortable ergonomics.  If you are counting grams though, this is your head.

Sirui K-10X:  The Sirui K-10X is a fully featured ball head.  It is on the large side of the optimal range for the GT1555T, but is still very workable.  It just doesn’t fold up quite as nicely with the legs as the other heads mentioned here.  The best part is the price, though if you are spending this much on the legs already, that is likely less important to you.

Gitzo GH1382TQD:  Because the GH1382TQD is the ballhead designed by Gitzo to go with their traveler legs, it deserves special mention.  It is a beautifully built head with styling and form that pairs nicely with the reverse folding function of the Gitzo legs.  However, the stiffness only comes in at 1117 Nm/rad which is nowhere near good enough for these legs.  Also, it is ridiculously expensive.  Unless matching the aesthetics of the head to the legs is a high priority for you, avoid the GH1382TD.