Both the stiffness and damping for the Centennial are excellent for a tripod with a center column and for a tripod at this price point.  The only similar tripods that out perform it are either much larger or much more expensive.

Even though the tube diameters are smaller than similar tripods made of the same carbon fiber, the Centennial outperforms them due to the choice of a wider leg angle.  The leg angle is incredibly important in making an efficient tripod design, and we see that play out positively here.  Normally, we expect to see the pitch stiffness at least three times higher than the yaw stiffness, which is not the case here.  I suspect that this is due to the soft rubber used on the top plate and lack of a set screw.  During pitch oscillations, this rubber allows for some give, reducing the stiffness.  We do see a corresponding significant increase in the pitch damping compared to the yaw, as is expected if the rubber pad is the culprit.  Again, I would like to see a harder material used as the damping pad as well as a larger diameter top plate.


As you can see, the stiffness is significantly worse when the center column is removed.  For many, this may be a surprising result as the general wisdom is that center columns reduce stiffness.  It isn’t the presence of the center column itself that reduces stiffness, but the method by which it is attached to the rest of the apex.  As shown on the design & operation page, the attachment of the top plate to the apex for the Centennial is weak without the center column.  There is slippage that is very noticeable with the test bar mounted on the tripod.  Whenever there is slippage like this, the stiffness falls and the damping dramatically increases as the friction during the ‘slip’ efficiently absorbs vibrational energy.  Stiffness is king though, and so this increase in damping does not somehow cancel out the drop in performance.  My recommendation is to always use the tripod with the center column installed, unless you need to remove it for low angle shots.  Removing it for weight savings alone isn’t worth the drop in performance. 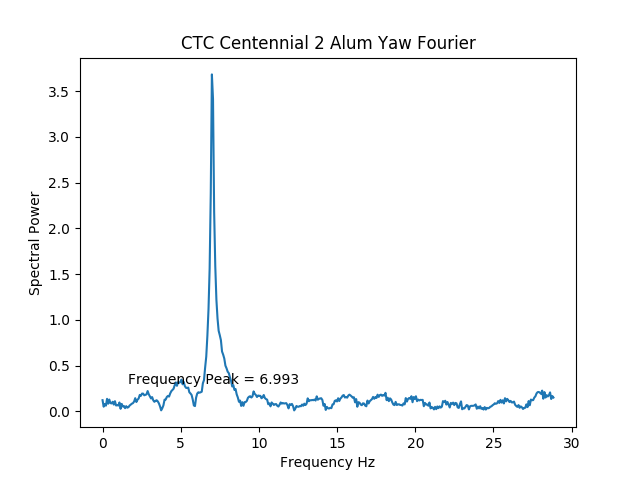 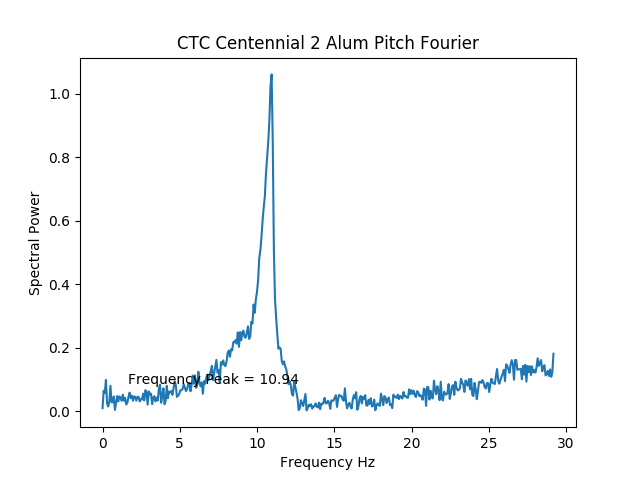 The soft rubber on the top plate provides a lot more damping for pitch oscillations.  More damping is more difficult to measure, which is why the graphs are a little noisier here.  Still no doubt about finding the right resonance line here though.