The core feature of The Center Column is the ability to provide quantitative data regarding the stiffness and damping properties of tripods.  For years, photographers have known that some tripods are better than others, but the language surrounding those distinctions has been imprecise.  “Tripod X is rock solid.”  “Tripod Y damps out vibrations”.  Here, we take the ambiguity out of such statements by precisely defining and then measuring the two aspects of tripod performance, stiffness and damping.

More stiffness = less deflection = sharper images.  If there are no hands pressing the shutter button, wind blowing on the camera, or any other external forces, stiffness isn’t important.  If you live in the real world though, increased tripod stiffness broadens the photographic envelope of possible resolution, focal length, and shooting conditions.

While stiffness is always extremely valuable and noticeable when handling the tripod, the value of damping is highest and most easily observed in the real world when using telephoto lenses.  At a fundamental level, damping is the extraction of energy from a system.  Telephoto lenses are larger, heavier, and therefore contain much more energy when put in motion.  Not only does the tripod’s damping capability take longer to extract that extra energy, but the extra magnification makes any little vibration more noticeable.

The testing method used at The Center Column for tripods and heads is straightforward and based on the simple physics of harmonic oscillators.  A large weight is placed on the tripod and then set into an oscillating motion.  By measuring the frequency of the oscillation we can then calculate the stiffness of the tripod.  Frequencies can be measured with great accuracy which allows for the very precise stiffness measurements found on this site.  The oscillations die out in a near perfectly exponential fashion.  From this rate of decay we then measure the amount of damping in the system.  Importantly, note that the exact amount of time for vibration to die out in the test isn’t important.  The test weights are designed specifically to make the oscillations slower and last longer for accuracy of measurement.  With any reasonable sized camera, the vibrations would die out much much faster.

The video above shows an example test.  Collecting the data from the test results in a graph such as the one below: 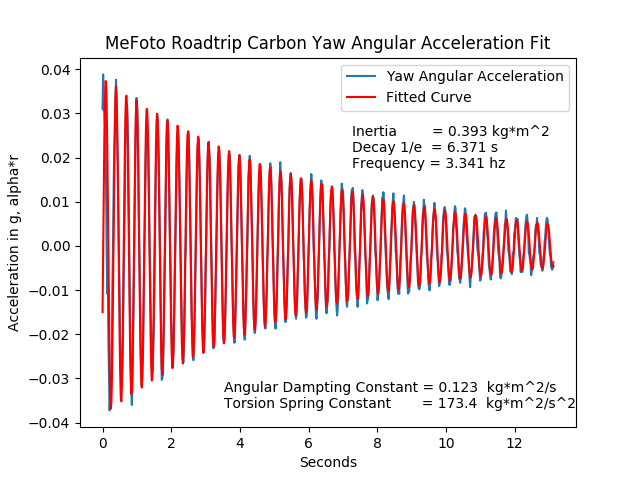 This is the raw data.  The calculated stiffness and damping properties are printed on the bottom portion of the graph.  From the perspective of the tripod user, these are the only important things on this plot.  Under the test results page on each tripod review, these graphs are published only so that people will believe the reported stiffness and damping.

I believe that knowing the stiffness and damping properties are as critical to choosing a tripod as knowing the noise from camera sensor, the sharpness of a lens, or the horsepower in a car.  The Center Column is dedicated to bringing you this data.  Exactly how much stiffness and damping are required to obtain sharp images with a particular camera, lens and set of shooting conditions is a subject of ongoing research.  More is always better, but you will have to decide how to prioritize performance versus, height, weight, cost, or any of the other factors that go into choosing a tripod.  Photography is another word for compromise, and in tripods we find not exception.