The RRS TVC-33 is a classic full sized systematic tripod.  The legs meet a wide apex platform designed for accepting a variety of different options such as a video bowl, center column or just the bare top plate.  The RRS is ultimately a simple and straightforward tripod, elegantly designed and unassuming in its presentation.  This highlights both the greatest strength and greatest weakness of the RRS.  It is a tripod without fault, but also without much flair.  It is the Mercedes C class of the tripod world.  Aside from price, the main reason you may look for a different model is to find something a little more interesting, to the extent that exists among tripods.

The build quality is phenomenal.  There is an attention to detail in the construction of RRS tripods that we just don’t see from other manufacturers.  The rounding of the edges on machined parts, the anodization of the aluminum, and the fit of the parts are all the best in the industry.  And this is in part what makes the RRS tripods so expensive.  There is no technical reason this kind of precision in the manufacturing is required.  It doesn’t help the tripod perform better.  But it feels fantastic to use and is clearly made to last.  This is where your money is going in a RRS tripod.  It is the effort put into the design and precision of the manufacturing.

The leg locks are of the twist lock variety.  In principle they function identically to every other tripod leg twist lock.  In practice they are some of the finest feeling twist locks on the market.  They require a very short turn to lock and unlock, speeding up operation.  With some twist locks, there isn’t a good feel for when it is completely locked down.  Not the case here; the RRS twist locks stop turning abruptly when they are locked in place.  Internally all twist locks work by the same basic mechanism, sandwiching a plastic shim in between the two carbon fiber tubes to lock them together.  I don’t know exactly what RRS is doing differently, but the feel of these is indeed the best in the business.  The twist locks have a nice rubber grip covering that does not slip or move. 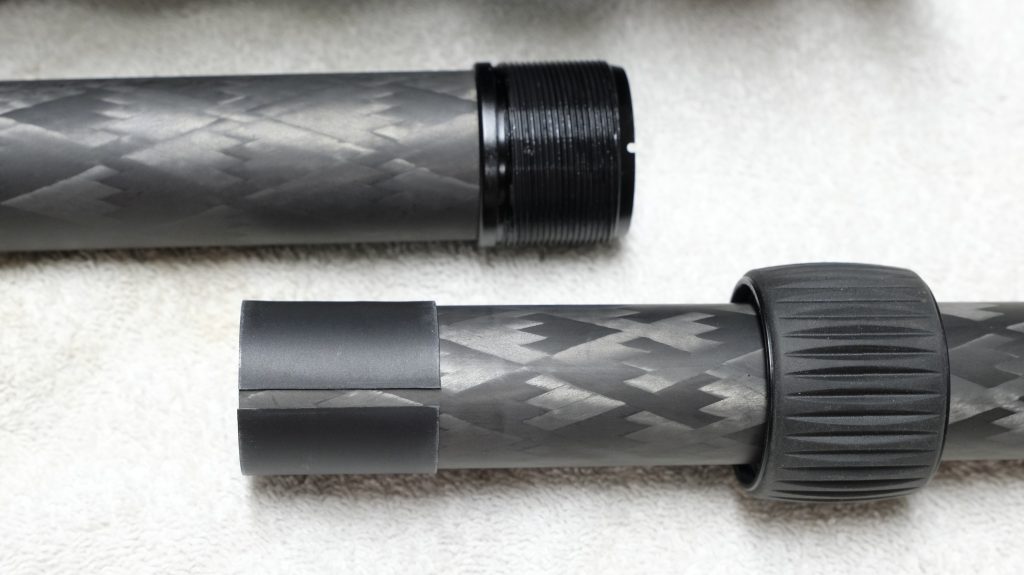 Note on the Mark II version:  The twist locks were upgraded to include a rubber gasket to prevent dirt and water entering through the top of the lock.  This was a necessary upgrade as all of RRS’s competitors had implemented such weather sealing since the original RRS tripods came out.

The bottom of the legs feature a metal cap threaded with a standard 3/8″ screw for threading in the feet.  The standard feet included with the RRS are a rubber ‘tear-drop’ foot.  These are my favorite all purpose tripod feet.  I prefer these feet over the more rounded and bulbous variety as they take up less vertical space when the tripod is folded up.  Any piece of the tripod that does not telescope into a more compact folded position as the legs do should be as flat as possible to maintain as short as possible folded length.  That’s the advantage to these style feet. 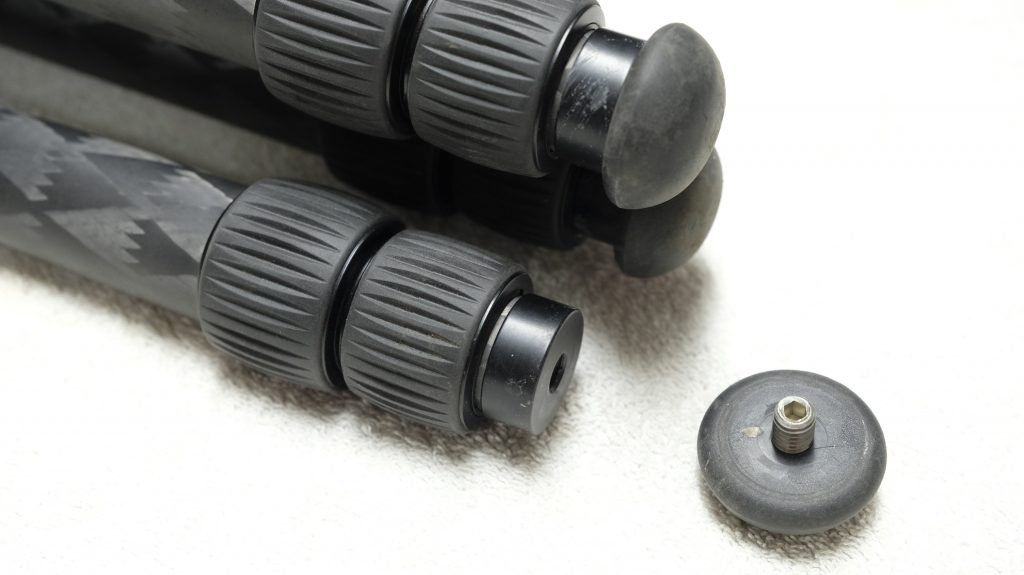 The 3/8″ threading does allow you the benefit of choosing whatever style feet you like.  RRS sells very nice sets of spikes and rock claws that can be used in more specific types of terrain.  Unfortunately these are obscenely expensive for what they are.  It is easy to find much cheaper alternatives elsewhere.  While it is commendable for RRS to not outsource their manufacturing, sometimes they probably should.

The top place on RRS tripods secures via a unique fashion.  Three set screws press a metal ring set inside the apex against a groove in the top plate.  This is superior to the tripods that simply secure the top plate directly via the set screw.  The advantage to this system over the Gitzo-style where the entire apex clamps around the top plate is that the there is no break in the apex.  The RRS ones are a solid ring.  In practice though, I have seen no measurable difference in performance between the two styles when a top plate is secured.  I see the difference as a matter of preference.  The Gitzo style is faster to operate and change out a a top plate.  The RRS style requires a hex wrench to operate the three set screws but provides a much clearer look, and a solid unbroken ring of metal to form the apex. 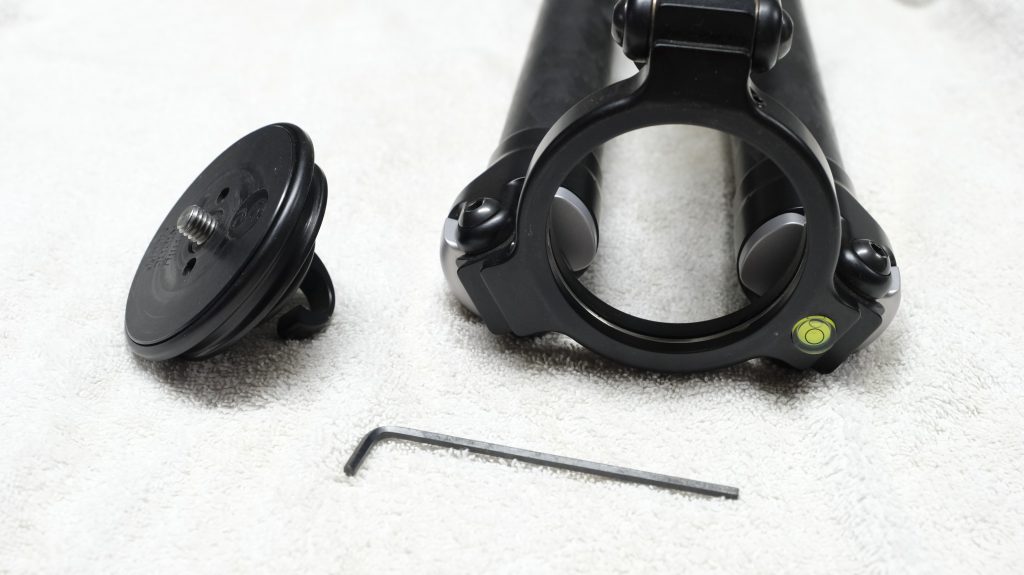 The Mark II tripods have accessory ports machined into the apex.  These are 1/4″-20 threaded ports that allow you to screw in a variety of accessories such as a phone holder.  Handy if you want this sort of thing.

RRS makes it very easy to swap between the ‘Versa’ and ‘Fixed’ style apexes.  The version with the versa apex is the one that is the primary subject of this review.  The fixed apex though is available for a fraction of the cost of a whole new tripod and allows you to transform to be much more compact.  By eliminating the wide versa apex, the legs can sit adjacent when folded, removing much of the negative space between the legs.  While it is much easier to pack this TFC version and strap it to the outside of a pack, it doesn’t allow for the various accessories such as the leveling base or center column.  As the name implies, it lacks the versatility of the TVC version.  Fortunately it takes about 5 minutes with a hex wrench to swap between the two styles so you only need to own the one set of legs.  RRS sells both types of apex separately so don’t feel as if you are locked into one type at purchase.

RRS uses pull tabs for the TVC-33.  An aluminum block pulls out from the top of the tripod to release the o operate.  This is the best implementation I have seen of the pull tab type angle selector. 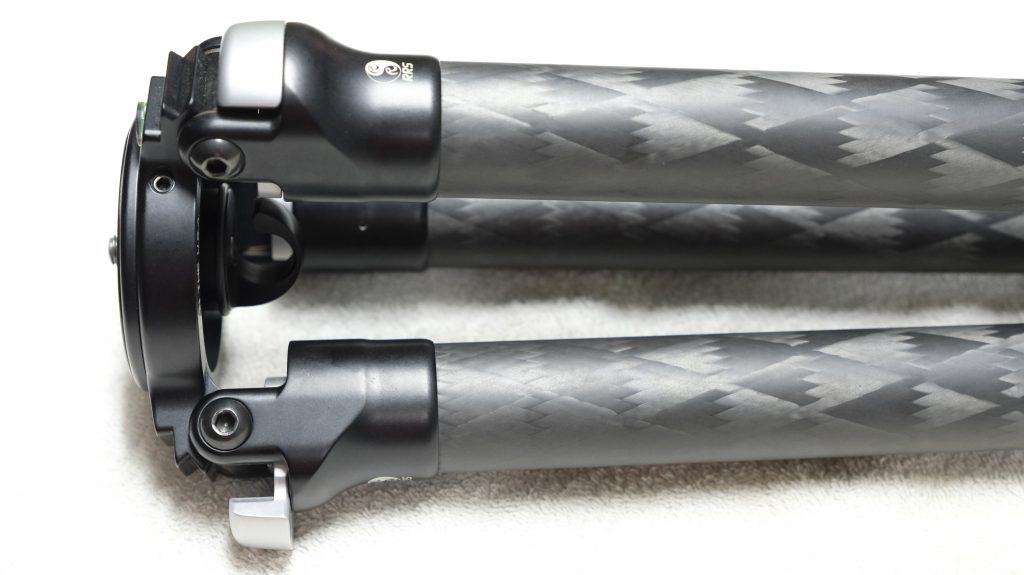 When switching from a TVC style apex to a TFC one, note that you will have to tape the angle selector in place.  It can fall out fairly easily when not attached to a tripod and is somewhat annoying to put back into place due to the nature of the spring mechanism.  RRS will send you more springs if you accidentally lose one though.  I found this out the hard way.

Note that the angle selectors pictured here are of an older style.  The newer Mark I and Mark II tripods have a much more streamlined pull tab that sits flush with the tube and doesn’t bulge out.

RRS uses a a filament wound carbon fiber tubing that is manufactured in the United States.  The tubes are sanded like most carbon fiber tubes to give a nice smooth matte finish.  We cannot directly assess the quality of the tubes without cutting them open, so we infer their quality from the performance from the stiffness of the tripod.  Across the RRS line of tripods we find excellent stiffness and so infer that RRS is using good modulus in their fibers, a weave sensible for use in tripods, and a good fiber to resin ratio.  In other words, these are quality tubes, as we should expect from a tripod at this price point.