The integrated head uses a 22mm ball that can seat below the apex to allow for a compact overall package when folded up.  While this is on the small side for a ball, I am not concerned about the overall stiffness as the stem connecting the ball to the clamp appears to be a reasonable thickness.  RRS uses a lever clamp here to lock the ball, which as far as I know, is a first.  Releasing the lever allows the ball to move freely as well as the drop notch to rotate.  Ball head stiffness tends not to vary too much with the clamping force, so I am not concerned about the stability of this setup, but I would have liked to have tested it to verify.

The miniature clamp has panning functionality, an impressive feat of engineering for such a compact setup.  The clamp uses a lever style quick release for use with RRS standard Arca dovetail plates.  This requires the use of a RRS L-bracket for your camera or a plate that is know to follow the RRS standard as the clamp is not adjustable.  Most RRS plates are rather large and bulky however, which doesn’t align in usage philosophy with the compact tripod.  In this way RRS mirrors Apple electronics, which tend to work well together but not necessarily with third party devices.  You are locked into the RRS ecosystem here.

The integrated head adds 1.5 in (38mm) and 0.2 lbs (90g) to the folded size and weight compared to the platform version of the Ascend.  This is very little weight overall but a non trivial amount of length.  In contrast, the RRS BH-30 head with a small clamp would only add 1.9 inches of overall length when the clamp is stowed in the drop notch to the side.  The 0.4 in of stowed space that one saves seems a small gain for the heavy price of not being able to use any other head on the tripod.  If the integrated head serves your needs however, the size and weight savings it offers complement the Ascend nicely and make it a clear choice.

When selecting a head, one wants to pair the legs with a head that will not compromise the stiffness of the system as a whole. On the other hand, a head that is too big adds diminishing performance increases and just adds weight.

Below is the optimization result for selecting a ball head. This chart plots the stiffness to weight ratio for this tripod and each ball head that I have tested in blue dots versus the stiffness of those heads. The red line is a generalized model for a strong performing ball head. The higher up on the this graph the higher stiffness/weight performance of the system. More information on this analysis can be found in the ball head choice optimization page. 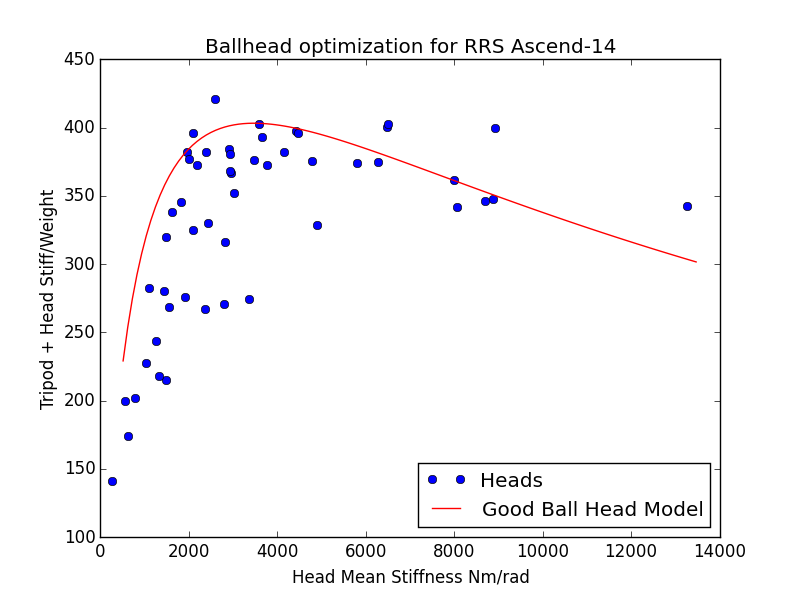 This chart is telling us that we want to use a head with a stiffness of around 3000 Nm/rad or above to get the most out of the Ascend.  As the Ascend isn’t a super light tripod to begin with it doesn’t make sense to use a super lightweight head either, especially since such smaller heads tend to have poor ergonomics.  Anything above about 5000 Nm/rad would be overkill though and probably too big for the Ascend anyways.

RRS BH-30 – RRS designed the Ascend platform to pair well with the BH-30 and is clearly their intended choice for those users who would prefer to forgo the integrated head.  With a mean stiffness of 2400 Nm/rad, the BH-30 comes in a little light in terms of the optimal stiffness for these legs.

RRS BH-40 – If you aren’t too concerned with weight, the RRS BH-40 is a surprisingly attractive option for the Ascend.  The overall base diameter of the BH-40 pairs well with the folded size of the Ascend and the low profile design of the head creates a reasonably compact package overall, with great ergonomics.

Acratech GP-SS – The Acratech isn’t going to be as compact as the other options here, but as an outdoor focused head it fits well with the theme of the tripod.  The Acratech heads also feature excellent ergonomics and the GP-SS on the Ascend would make for a wonderfully easy to use setup.

Note that these recommendations are limited to the tripod heads I have tested.  The more general discussion above should provide adequate guidance if your head of choice is not listed.  There are a variety of cheaper options that would work well such as the Sirui K-20X and Colorado Tripod Company Highline small ballhead.  Given that the legs themselves are north of a grand, I am assuming that one would be looking for the absolute best in a head as well.

The table below shows the estimated combined stiffness of this tripod with each head I have tested to date. The plot above is simply a visual representation of the last two columns in this table. The recommended heads are loosely based off this list but take into account other subjective factors of ergonomics, build quality, and value.