The overall geometry of the Ascend is not so different from what we are used to in a tripod with a center column.  Below the apex, the legs are indistinguishable from RRS’s other tripods.  At the apex though, we find everything much more compact resulting from a single the seemingly simple change from a traditional round center column to one with a ‘Y’ shaped cross section that neatly fills in the negative space between the round legs.  The result though is a cascade of changes through the apex and center column which we will explore further in this section.  What RRS gets for all of this trouble is the ability to avoid the reverse folding design so commonly found on travel tripods.  The reverse folding design, while compact lengthwise, tends not to be volumetrically compact and takes slightly longer to set up and take down.  This last point may not seem so important, but when you are chasing the light every second can count.  Personally, I have never liked the reverse folding design and believe that more traditional layouts with an oddly shaped center column are the future of travel tripods. 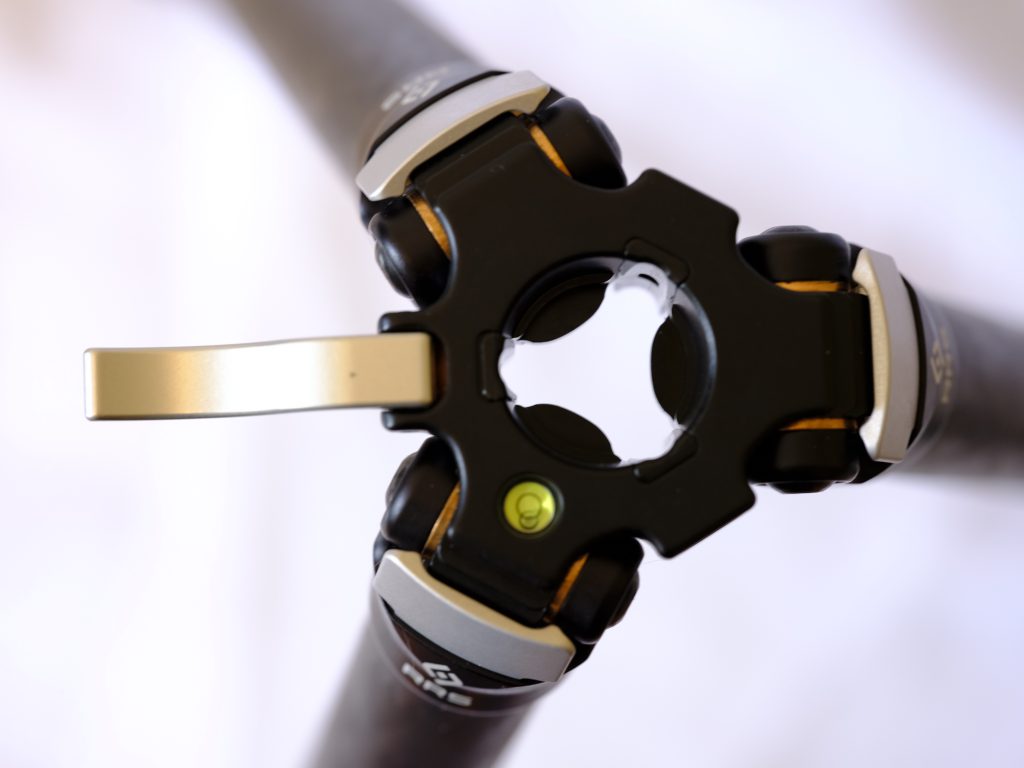 The build quality on the Ascend is perhaps the finest I have ever seen in a tripod.  This is of course a somewhat subjective measure, but I can’t recall ever seeing such a display of manufacturing precision.  Sure, there are plenty of tripods out there with larger and more robust components, but then tend not to be travel tripods designed to minimize size and weight.  It takes a much greater level of design and manufacturing skill to make a product with small lightweight, but still robust and tightly fitted parts.  This is exactly what we find in every part of the Ascend and goes a long ways towards explaining why the tripod is so expensive.

All of the parts around the apex are made from machined and nicely anodized aluminum.  RRS has always managed a beautiful finish to their parts the Ascend is no exception.  There are no sharp corners on any of the components and they all fit together perfectly.  The moving components are not too tight or too loose.  These little things are easy to take for granted but after handling a lot of tripods for which such details are overlooked, I appreciate it. 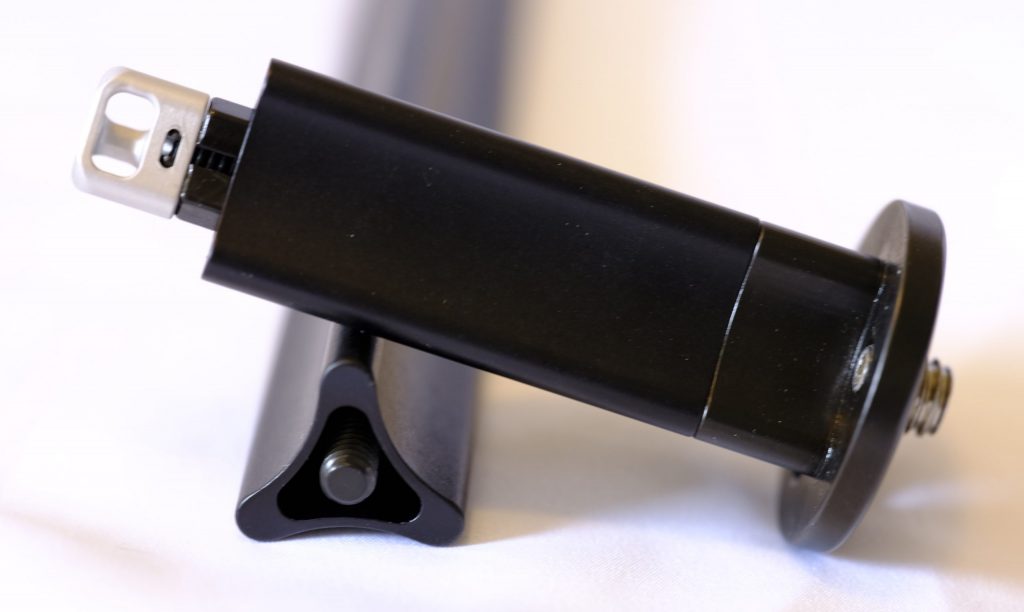 The Y shaped center column is of course the design focus of the Ascend.  It allows the legs to fold neatly around the column, almost as if it were not there.  Changing the shape of the column was only one piece to this puzzle though.  RRS uses a dramatically different locking mechanism as well to support the change in shape.  Most tripods use a twist-style compression lock for the center column, similar to the legs.  This would still be possible for the Y-shaped column, but RRS instead uses a cam lever to press the column up against the inner wall of the apex.  The edges of the column are supported by three plastic grooves within the apex which allow it to slide freely when unlocked and prevent direct metal-to-metal contact.

The lever makes locking and unlocking the column much faster and easier than typical twist style locks.  It is similar to the difference in ergonomics between a lever and screw style quick release clamp.  They both work well, but the lever action has better ergonomics.  With a twist lock, you have to apply a significant amount of torque to the tripod, often requiring the use of a second hand to stabilize the tripod during while locking and unlocking.  The lever only requires one hand, freeing up the other to position the camera.  It might not seem like much, but it is nicer to use in the field.

The center column unscrews into two pieces via a threaded rod from the bottom hook up through to the female threaded top portion.  A small precisely machined metal cage guides the bolt and provide a small opening from which one can potentially hang weight when the bottom portion of the column is removed.  Splitting the column allows the user to either reduce the weight of the tripod or lower it to the ground for low angle shooting.  Reducing the weight of the tripod in this way seems rather pointless though, as the entire purpose of the Ascend is to provide a center column in a compact tripod.  The center column assembly is rather heavy though compared to a traditional one with a circular cross section.  The added material in the wall of the column can be seen in the cross section, along with the connector bolt.  This is unnecessary on a circular column as the column itself can contain the threads for breaking down into a low angle configuration. 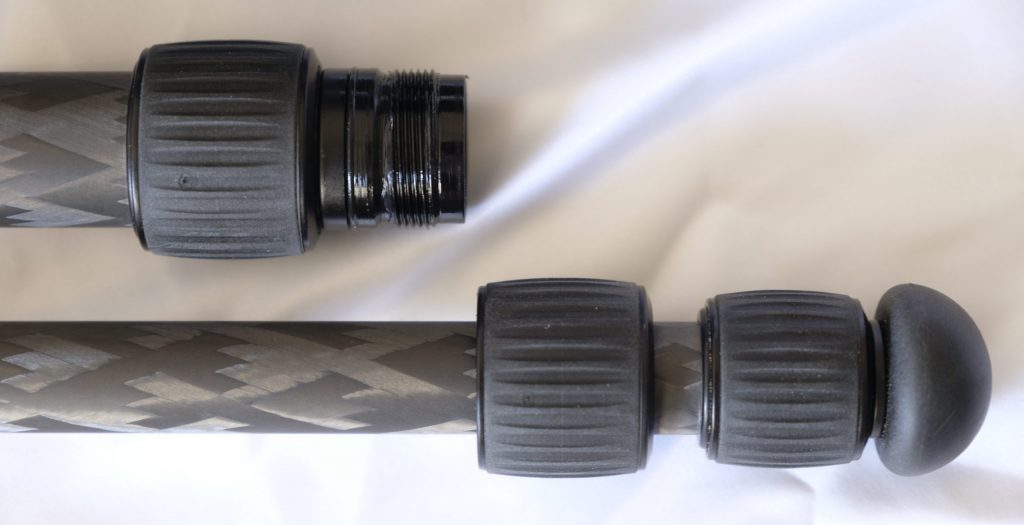 The Ascend uses RRS’s standard second generation twist locks with rubber o-rings to seal against dust and moisture.  As RRS advertises, it only takes a quarter turn to lock and unlock the leg sections.  Each lock is covered with a rubber grip that does not slip at all over the underlying threaded metal.  As someone who had tested many different tripods, I still think RRS makes the best twist locks in the industry.  It is hard to say exactly why.  They are simply work flawlessly and without fuss. 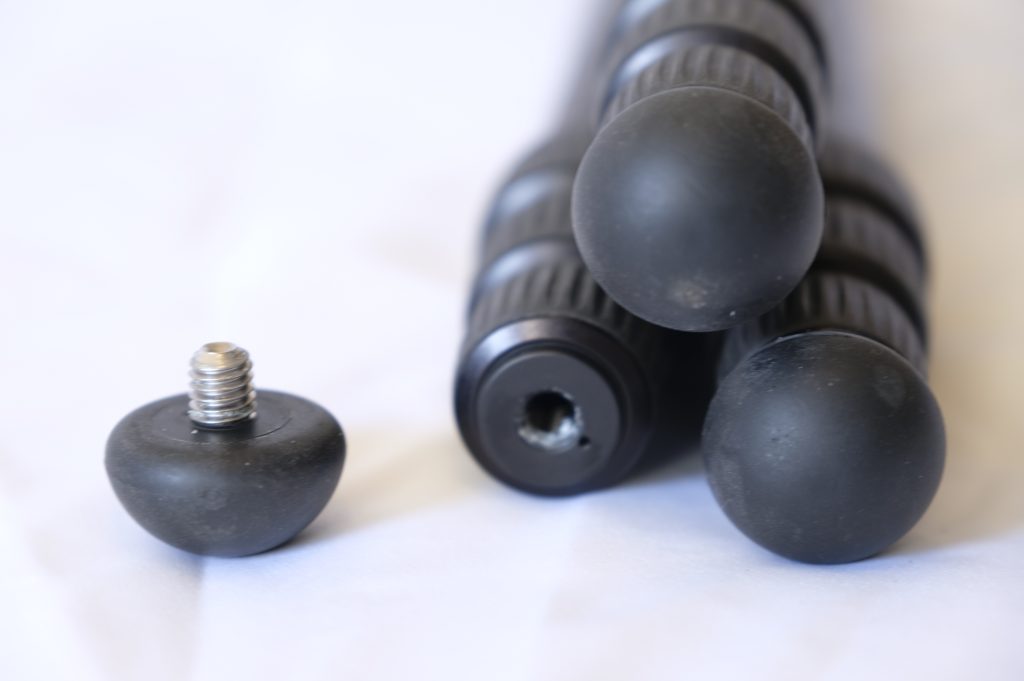 The feet on the Ascend are the tried and true rubber teardrop feet that come on all RRS tripods.  These are the most versatile type of foot as they provide good grip on any surface aside from very loose sand or snow and don’t tear holes in your pack.  They screw into the bottom of the leg via a 3/8″-16 thread which allows for compatibility with all standard threaded feet and spikes.  I would have liked to see RRS use a lower profile, flatter foot to reduce the folded length of the tripod, such as those found on FLM tripods.  Its not a major issue though as it is very easy to replace them with whatever you would like.

Atop the center column we have a small platform that allows for the mounting of any head with a 3/8″-16 screw hole, which is essentially all of them.  The plate itself is fairly small and designed to match with the RRS BH-30 head.  The platform is large enough though to securely mate to any head you might choose and is tapped and threaded for a set screw.  I would have liked to see a larger diameter plate here with a rubber pad for better damping characteristics, but the lack thereof is consistent with other travel tripods.

The three sides of the apex contain a 1/4″-20 threaded accessory port, a QD port for straps, and the lever release for the center column.  The top contains a small bubble level.  Given the compact size of the apex piece, this is about all that can possibly be fit. 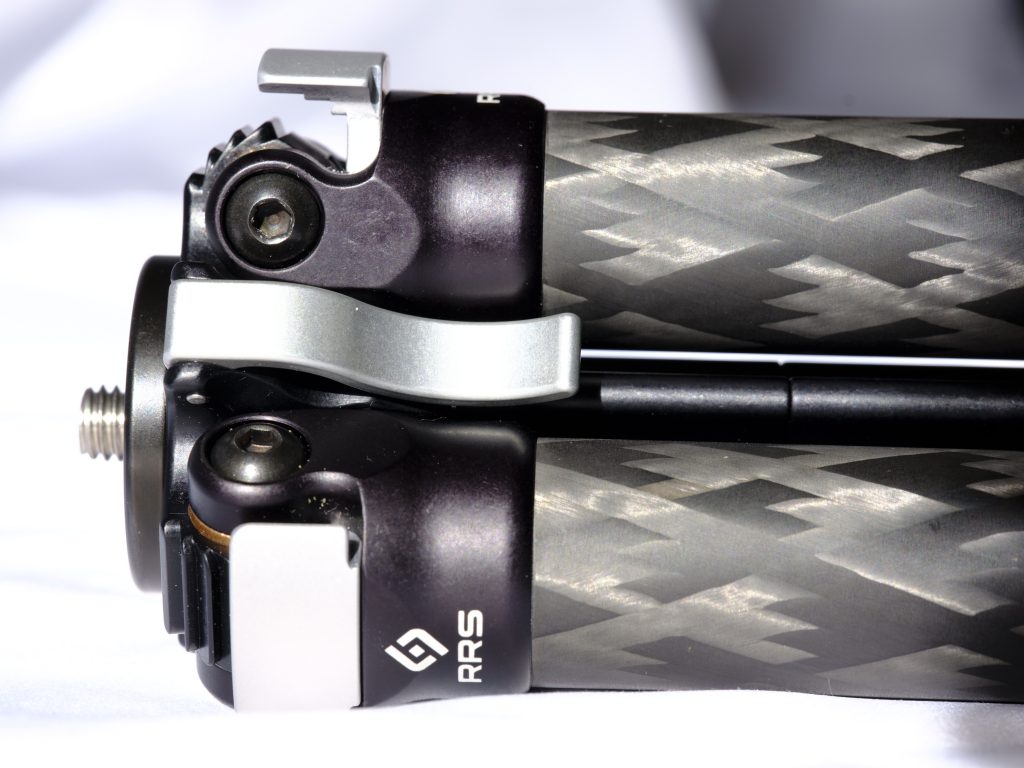 The Ascend uses pull tab style angle selectors, just like every other RRS tripod.  These however have been re-engineered to minimize their contribution to the weight and overall length of the tripod.  To minimize folded overall folded length while maximizing the height of the tripod, one wants to maximize the amount of length taken up by the nested tubes of the legs within the folded structure.  Any such length contributes N times to the height of the tripod, where N is the number of leg sections.  All other parts of the tripod only contribute 1x, and thus must be flattened as much as possible.  This is exactly what RRS has done with the pull tabs, sliming them down significantly.

When folded, the back of the pull nudges up against the center column, pushing the front of the pull tab flush with the rest of the leg rotation bracket, making it easier to pull the selector tab from a folded position.  The pull tab itself is machined to impact the angle notches in two positions to increase area of contact and reduce stress on the tab.  When pulled out, the tab locks in position until the leg reaches its maximum angle, at which point it snaps back in and ratchets down to the angle the user the desires.  For the smallest angle, the standard and most commonly used position, no adjustment is necessary.  All of the mechanics around the pull tab demonstrate a stunning combination of attention to detail and manufacturing precision.

RRS uses their standard fiber-wound carbon fiber tubing which is sanded to a comfortable and attractive matte finish.  We have seen excellent performance out of these tubes in RRS’s other tripods, and again here.  I suspect they are using a standard modulus carbon, but I have no way to confirm this.  At some point I would like to see RRS transition to a medium or high modulus carbon tubing in order to maintain their performance edge.  We are starting to see higher quality tubing come in the mid-range of the market and RRS will need to stay ahead to justify the price gap.