I don’t normally get a chance to field test the tripods I review but managed to get this one out for a couple quick shoots.  This isn’t a formal page in my review, but more a collection of musing from my use of the PD tripod in practice.

I took my compact medium format kit comprising of the Fujifilm GFX 50s, 32-64mm, and 110mm along with the the PD travel tripod out shooting on the shore of Lake Tahoe.  The entire kit fit pretty easily into the Peak Design 13″ shoulder bag, as shown below. 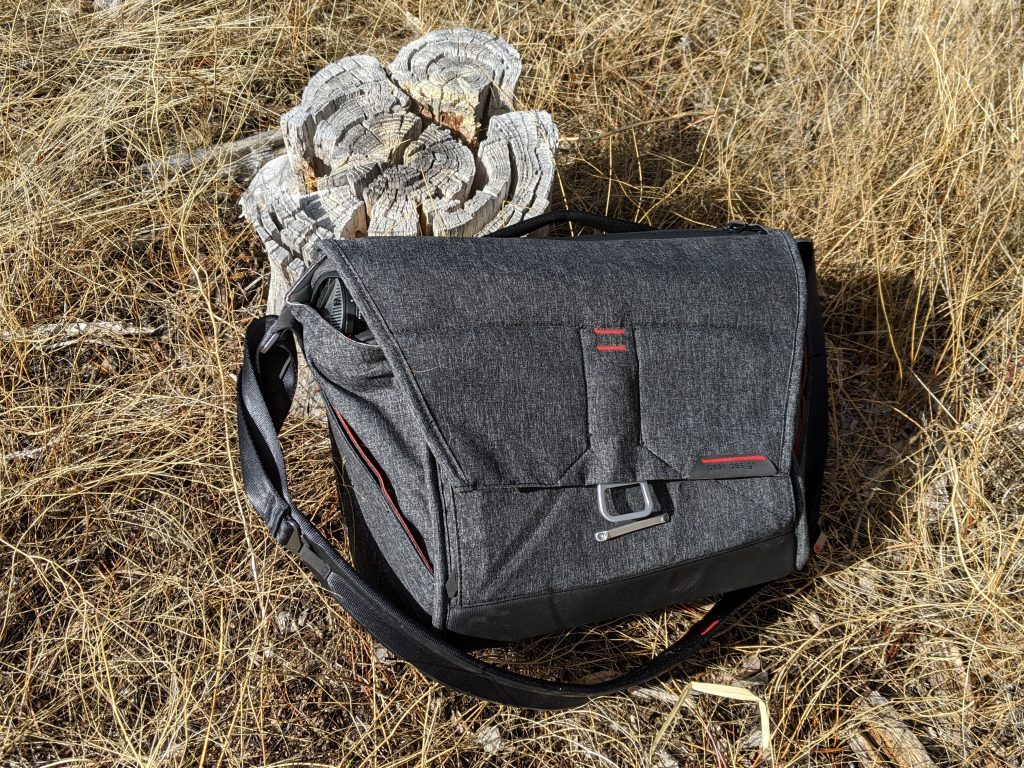 A shoulder bag is my preferred method for shooting while on location.  I like to have my entire kit accessible without having to take a pack on and off.  Being able to store the tripod in the shoulder bag meant that I didn’t have to carry the tripod in my hands during the 15 minute walks to and from the parking lot. I would have liked to strap the tripod to the bottom of the bag, but that wasn’t an option here.  Carrying a tripod in the hand isn’t overly onerous and I wouldn’t get the PD tripod to avoid this specifically, but it was appreciated nonetheless.  If the purpose of the outing was not primarily photographic, I would be far more likely to throw the PD tripod in the bag than any other I have used.

A decent 10-15 MPH breeze was blowing while I was shooting.  In the broad daylight, my shutter speeds were too fast to make any judgments from the sharpness of the images.  However, I could see vibration from the wind when zoomed in on the LCD screen.  Vibration was negligible when using the 32-64mm.  The shorter focal length just doesn’t magnify any movement enough to see.  When using the 110mm, there was some visible vibration from the wind.  I would expect to see some blurring under these conditions when doing longer exposures with this setup.

You can use a number of techniques to minimize the impact of wind.  The simplest is to just use an umbrella of your body to shield the camera.  This is straightforward.  Less wind = less force on the camera.  Also, using a longitudinally mounted Arca plate can allow you to center the camera + lens over the tripod.  This both reduces the torque exerted on the system by the wind and reduces the camera’s effective yaw moment of inertia, making the job of the tripod easier.  This is in part why larger lenses have a tripod foot.  You can often get away with a smaller, lighter tripod if you take the time to optimize the performance. However, If I regularly shot with large medium telephoto or longer lenses in breezy conditions, I would want a more stable tripod.  It just takes away one more thing to think about when trying to get the shot.

Note that this discussion is all about the impact that the stiffness of the legs have on tripod performance.  The PD tripod was able to physically support the weight of the camera effortlessly.  Weight ratings tell you very little about how a tripod perform.  Stiffness however, does, which is why it is used as the primary metric for constructing the rankings on this site.

The image below shows the GFX 50S on the PD tripod in use.  The 50S body is about the size of a full frame DSLR, and it makes the tripod look fairly small in comparison. 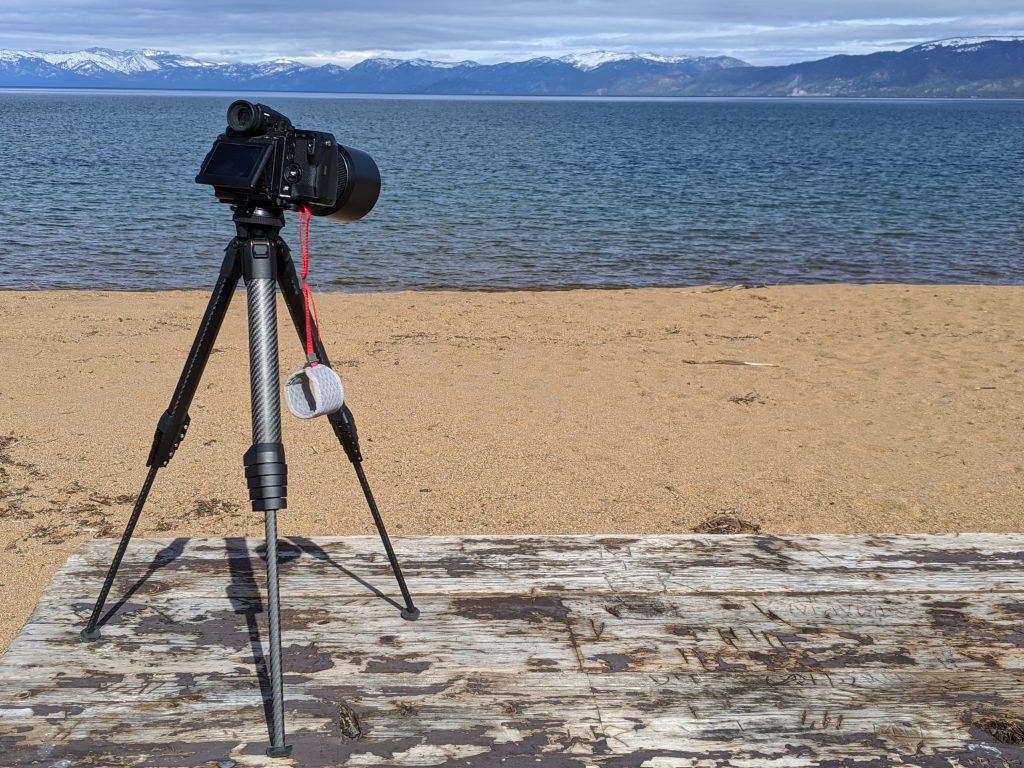 You may ask why I have extended only the bottom leg sections here.  Wouldn’t the tripod be more stable with the largest leg sections extended first?  Yes, yes it would.  However, with the tripod in such a low configuration, stability isn’t much of a concern, but getting sand into the flip locks is.  There is no faster way to ruin a shoot or a tripod than by getting sand into the moving parts.  You can clean it out and PD provides the tool to do this, but it is incredibly time consuming and a task I would very much like to avoid.

As a test of the travel worthiness of the tripod, I brought it to Baja California on a beach vacation.  As can be expected, it performed wonderfully.  The tripod slipped right into my small carry-on Lowepro Photosport 200AW backpack.  Between the camera, a small laptop, and the various other small carry-on items, the space that the tripod took up in the pack was fairly unobtrusive.  This is of course where the PD tripod really shines.  Normally when I have taken tripods on such trips they have been miniature or very short models.  The PD allows me to have a fully featured and reasonably tall tripod while taking up a similar amount of space.  I can’t say I appreciated the weight of the PD tripod given the other heavy electronics I was carrying, but its not like there are any lighter options at the PD tripod’s height.

I got in one evening shooting sunset at the beach.  Being on the cape, it was breezy with winds at about 15 MPH with gusts up to 20 MPH or so.  I didn’t have an anemometer with me, so these are rough estimates, but it was certainly more than just a light breeze.

I was shooting a Fuji GFX 50S with the 32-64mm zoom.  Now, one might balk here and say that using a medium format camera is an unfair test of a poor innocent lightweight travel tripod.  It is not.  The size and focal length of the lenses used matters much more to the overall stress put on the tripod than the size of the sensor.  It is moment of inertia (MOI) and magnification that matter, not sensor area.  This camera and lens are roughly the size and equivalent of a full frame camera with a 24-70 F/2.8 zoom.

To reduce the MOI I had the center of mass of the camera and lens centered over the tripod using an Arca plate mounted to the camera, but in the direction of the lens axis.  This not only keeps the load on the tripod to a minimum by pulling the weight in closer to the rotation axis of the tripod, but reduces the amount of torque the wind puts on the camera.  I highly recommend this configuration when shooting in windy environments. 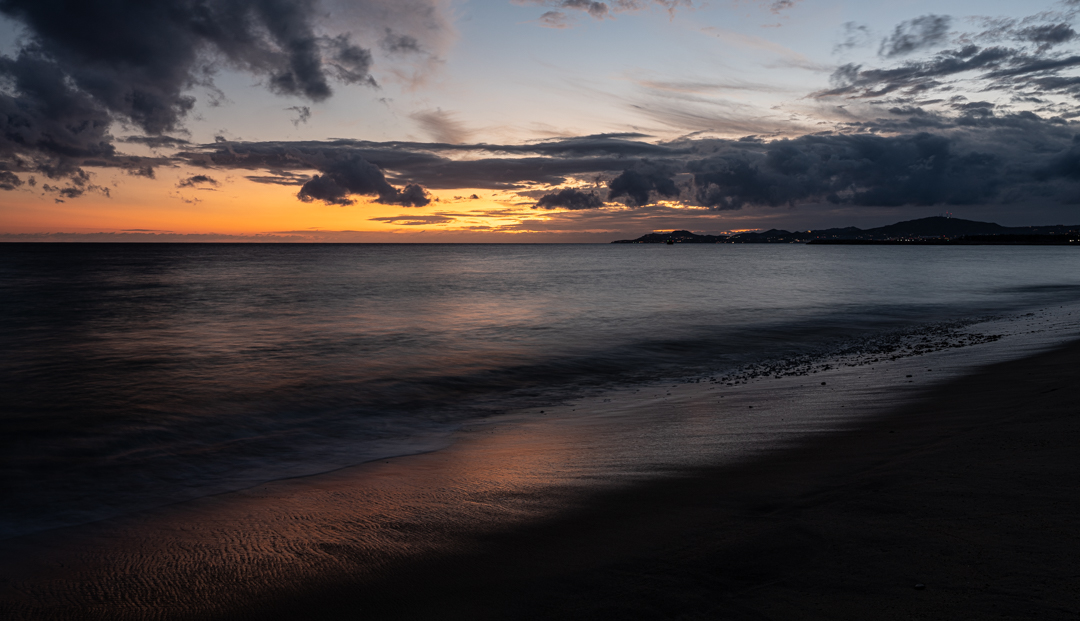 The tripod had no trouble keep the camera steady during the exposure.  Below is a 100% crop from the above image: 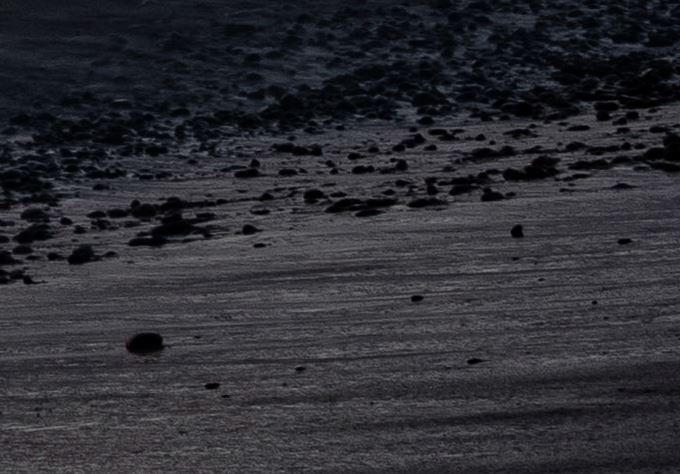 It is a very sharp image.  This is of course a real world test and not a laboratory one.  If we went looking, I am sure we could find some small reductions in the MTF50 when shooting test charts in the wind.  In practice though, the PD tripod worked great.  I could not have taken this image if I didn’t have a tripod with me, and the PD tripod is infinitely better than no tripod at all.