Typically this section of the review does a broad overview of what kinds of heads are appropriate to use with the tripod and makes some specific recommendations.  In this case though, most users will use the included head because it is designed to keep the overall size of tripod to a minimum and is, well, included.  First we will look at the head included with the tripod and then do a normal stiffness/weight optimization for other heads and make some specific recommendations.  As we will see in that section, the PD head included will provide the best technical performance of any head combined with these legs.  There are good reasons to use other heads, but if you are just trying to optimize stiffness/weight ratio, just stick with the PD head.

The head included with the PD tripod is of the upside down ball design we have seen in several stand alone ball heads such as the Arca-Swiss P0.  The stem of the ball head connects down the to the tripod legs (in this case directly to the center column) while the locking mechanism is all contained in the top part of the head.  The advantage of this design for the PD tripod is that when folded up, the ball can nest down into the apex for compact storage.  The only thing that sticks above the legs is the clamp and locking mechanism, adding only about an inch to the overall folded length of the tripod. 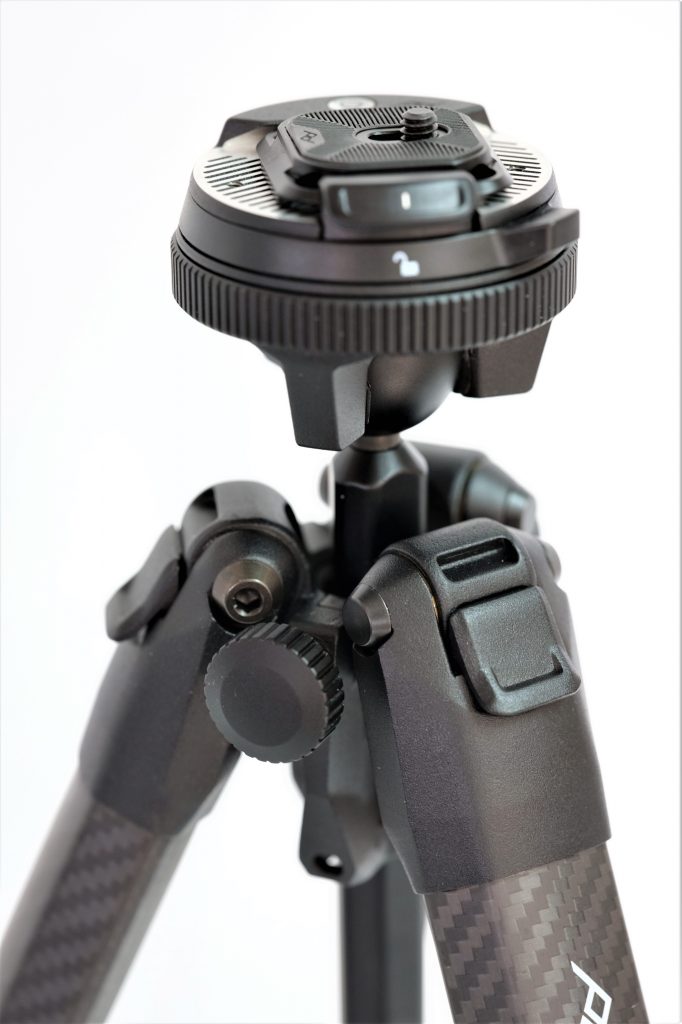 The less obvious advantage to the upside down ball head design is that the lock mechanism is placed directly underneath the camera and as part of the clamp that moves with the camera.  This means that the hand you use to lock and unlock the head can also be used to help support and position the camera making the whole process of using the head faster and ergonomically superior to a traditional ball head.  The main locking ring can always be found right beneath the camera without having to take your eye off the subject.  You can grab the locking ring with your entire hand and in one swift motion lock or unlock it.  My only gripe is that this locking ring has some play to it.  It has some play or backlash in the gearing that gives it a loose feeling.  This doesn’t affect the performance or handling in use, but it does not give the feel of a high quality precision instrument.

The PD head unfortunately lacks any panning capability separate from the main ball lock.  PD omitted this functionality to save weight and space on the top of the head where any additional bulk adds directly the tripod’s overall folded length.  PD has discussed producing an optional panning device that can fit onto the top of the tripod, but nothing has come of that yet.  If you must have panning functionality, I recommend using a different head such as the ones listed below or adding one of the many commercially available arca-compatible panning clamps that can simply clip into the top of the PD head via an arca dovetail.  Not an elegant solution, but a workable one.

The clamp on the PD head is of a very unusual design.  PD didn’t want to have any protrusion from the head that would compromise the tripod’s slim profile and ability to easily pack into tight spaces.  This ruled out the use of a normal screw or lever clamp.  The solution that PD came up with is a spring loaded clamp that holds the plate in place while a rotating ring with an internal cam mechanism locks it down.

Overall, this mechanism works quite well.  It is not as fast as a good lever locking clamp, but is faster than the more universal screw style clamps.  For very small cameras, the spring alone is enough to hold the camera in place, but for any serious work I would recommend using the locking ring.  The locking ring is activated by rotating it clockwise via the small thumb rest that sticks out to the side.  This protrusion is fairly small to keep the overall profile slim which can cause a small bit of discomfort when trying to unlock the ring.  The easiest way to avoid this is to not apply full force when locking the ring.  Lightly hand tightened is plenty.

One problem with this design is that the clamp that holds the quick release plate down is a little bit taller than most Arca-Swiss style clamps.  This causes the PD clamp to not work will with some Arca-style plates as the clamp can push the plate up off the flat top of the head, shown in the images below.

The PD plate of course works well, as does the Desmond RRS style plate.  The Breakthrough Photography plate has a shallower dovetail though and clearly has some problems.  Unfortunately there is no widely used standard for the exact dimensions of the Arca quick release plate, so I cant tell you which plates will work and which won’t.  In general though, plates with a deeper cut dovetail will work better.  I will note that the in all three cases the clamp does actually hold the plate securely.  Even with the Breakthrough Photography plate, there is no play and the plate feels rigidly locked in place.  Still, it would be better if it sat flush with the top of the head.  For example photos with more types of plates, see this dpreview thread. 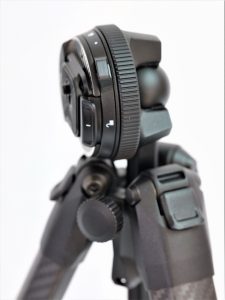 To use the head in portrait orientation, one simply flips the head over to the side.  PD has designed the head and connection to the center column with enough clearance to allow the head to rotated a full 90 degrees.  A traditional ball head uses a drop notch in the housing to accomplish this.  For the PD head, spaces between the three arms holding the ball are effectively three large drop notches.  The rotation allowed by any one of the drop notches is limited by the arms.  To get past this hard stop, you simply have to rotate the head 180 degrees across to the other side of the ball.  Or, if you prefer to keep the camera on the same side, just unclip the camera from the head and rotate the head 180 degrees in place.

This awkwardness of having to rotate the head position to access the full 360 degrees of possible camera positions is typically avoided by using a panning clamp/base in conjunction with the ball.  PD managing to come up with a way to achieve the same functionality without panning is actually rather clever.  Still though, until you get used to it having to flip the clamp around can be obnoxious.

The stiffness figures here are lower than with the 3/8″ adapter, but this is expected.  All heads reduce the system of the system by some amount.  Here we see only a 12% loss in stiffness from adding the head, which is very reasonable.  This means that the head is much stiffer than the legs and so isn’t the limiting factor to overall performance.  The head appears to be at least seven times stiffer than the legs based on these figures.  Typically we want the head to be at least three times as stiff as the legs, so the data shows nothing concerning about the stability of the PD head.  It is quite well matched to the legs.

Here we are going to select a head for the PD legs as if it didn’t come with one.  This is normal content of the head optimization page.

When selecting a head, one wants to pair the legs with a head that will not compromise the stiffness of the system as a whole. On the other hand, a head that is too big adds diminishing performance increases and just adds weight.

Below is the optimization result for selecting a ball head. This chart plots the stiffness to weight ratio for this tripod and each ball head that I have tested in blue dots versus the stiffness of those heads. The red line is a generalized model for a strong performing ball head. The higher up on the this graph the higher stiffness/weight performance of the system. More information on this analysis can be found in the ball head choice optimization page. 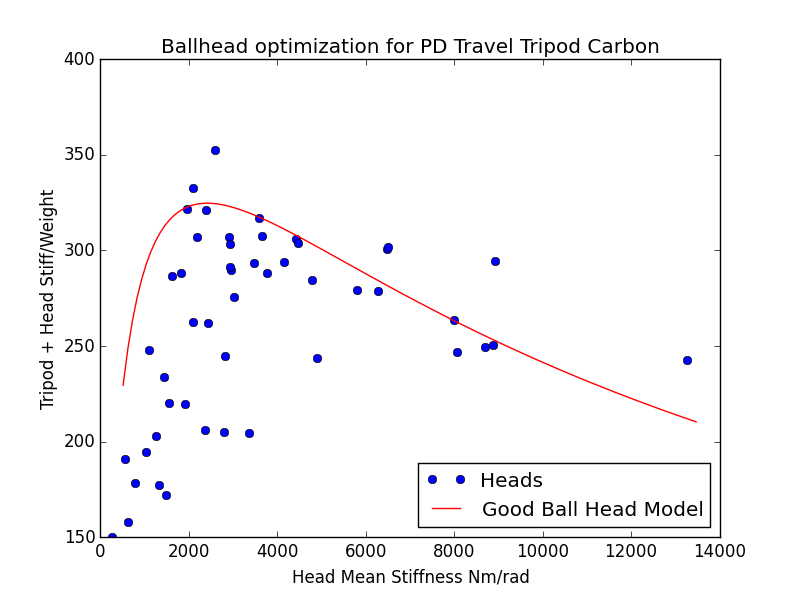 This chart is telling us that we want a head with stiffness of around 2000 Nm/rad or more and for the head to very light weight.

Normally I wouldn’t suggest using gimbal head with a travel tripod.  However, I think that a small gimbal is one of the better uses of the optional 3/8″ adapter.  A gimbal head provides capability that the included ball head simply does not.  I could see a user with one of the 600mm super zooms using the PD tripod with a gimbal in a pinch.  A larger tripod would still of course be ideal, but is not always an option.

Note that these recommendations are limited to the tripod heads I have tested. The more general discussion above should provide adequate guidance if your head of choice is not listed.

Rogeti RG-1 Geared Head – The RG-1 is one of the smallest and lightest geared heads available.  It is also reasonably priced  This makes it a nice pairing if you are looking for the benefits of a geared head in the smallest lightest possible overall package.  Even as the smallest available geared head, it still looks pretty big sitting on top of the PD legs.  The stiffness is merely okay for a geared head, but this matters less on the PD tripod than it does on the much larger, stiffer tripods that geared heads are typically used on.

Really Right Stuff BH-40 – While the smaller BH-30 might technically be a better match from a technical standpoint, the BH-40 is going to be a dark horse here.  The larger size of the BH-40 is an almost perfect aesthetic match for the PD tripod.  The BH-40 is still quite compact and adds less to the overall length than most ball heads.  If you want a more traditional head with panning capabilities and tension control, this is the best option.

Sirui K-10X – The Sirui K-10X is a reasonably priced small head.  Build quality and performance are excellent for the price.  If you want a more traditional head on a budget, this is a great choice.

The table below shows the estimated combined stiffness of this tripod with each head I have tested to date. The plot above is simply a visual representation of the last two columns in this table. The recommended heads are loosely based off this list but take into account other subjective factors of ergonomics, build quality, and value.  In this particular case I have added the weight of the 3/8″ adapter when calculating the below table, as it is necessary to use a 3rd party head.  The PD head included with the tripod is also represented below.

Note that the optimal heads listed below are basically all of the lightest heads.  This is often what happens for travel tripods where the heads are so stiff compared to the legs that weight is dominant factor in doing this optimization.  The PD head performs well in stiffness and is also the lightest option as it does not require the 3/8″ adapter.