Tripods are ultimately pretty simple devices, and for the most part they don’t vary that much in their basic design.  Differences in tube diameter, material, and number of leg sections account for most of the differences we see between models.  This is why the Peak Design travel tripod is a breath of fresh air in a stagnant market.  Peak Design was laser focused on making the most compact possible, fully featured tripod.  Instead of just reducing the folded length as many travel tripods do, Peak Design has dramatically reduced the overall folded volume. 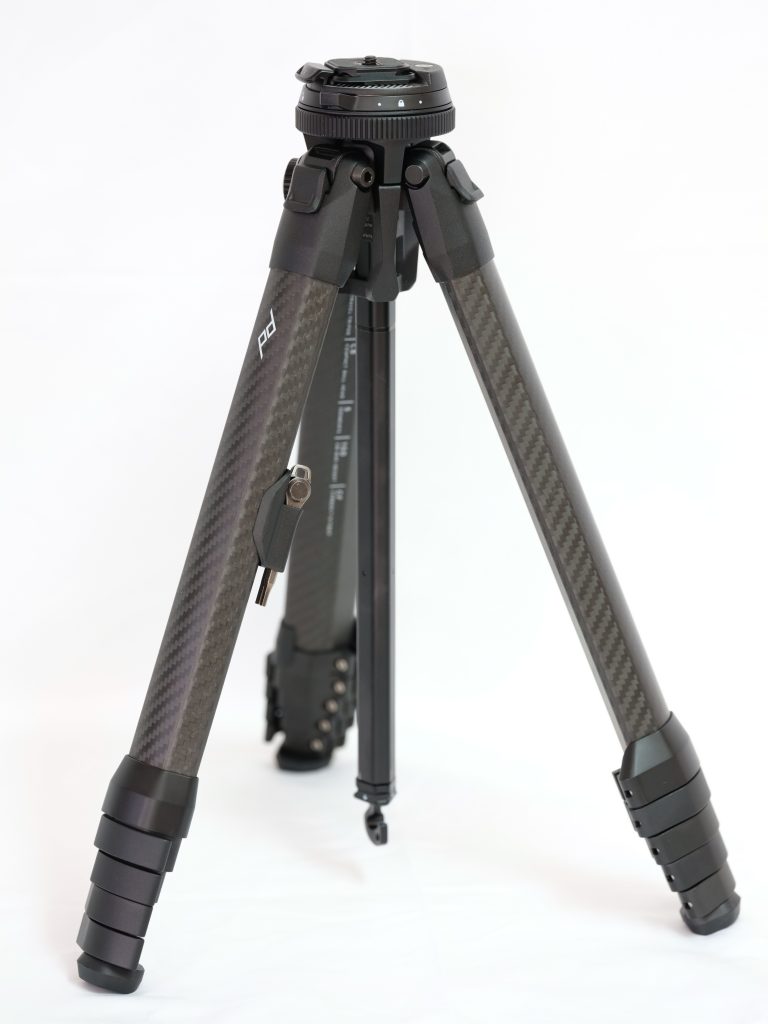 In this effort they have been spectacularly successful, but they cannot operate outside the laws of physics.  This review will explore the extent of the compromises necessary to achieve such a compact form and hopefully help you decide if this is the right tripod for you.

Normally this is where I put a fairly standard disclosure about my lack of any reason for bias in writing the review.  I can’t do that here.  During the development of this tripod I worked closely with Peak Design and was paid to do multiple rounds of prototype testing.  I believe I helped make this a better product and am proud of my contribution.  I like the people at Peak Design and would welcome the opportunity to work with them again.  For these reasons, I of course cannot be completely detached and free of any bias, conscious or otherwise.

For this review though, I am going to do my best to put my independent reviewer hat back on.  I was in no way paid or compensated for this review by Peak Design.  To their credit as an honest company, they have repeatedly insisted that whatever I write should be my own true, untarnished opinion.  While I have handled many PD travel tripods over the last year, the particular tripod this review is based on was purchased by me as part of the Kickstarter campaign and is thus fully representative of what a consumer would receive.  This review is largely based on the test results of that tripod which are of course not faked or altered.

With that out of the way, here are those measured specifications:

The test results are included here as I consider them to be part of the tripod’s specification. For full discussion of the stiffness and damping, see the test results page of the review.  To make the most fair comparison between other tripods, the specifications listed here do not include the head.  The weight with the head and 3/8″ adapter is also listed.  For the height, add a 1″ to the heights listed here to get the height with the head.  This isn’t an appreciable difference.

While the overall weight is fairly low end for travel tripods, especially given the height, the PD tripod doesn’t feel particularly light when it is folded up.  This is because human perception of weight is more closely related with density than it is with actual mass, and when the PD tripod is folded up, it is rather small and therefore dense.  When it is unfolded and set up it feels much lighter.  Of course at the end of the day when the tripod is folded up and in a pack, perception of weight doesn’t matter, only the weight, and the PD tripod is quite light compared to its peers.  This discussion of density is only necessary due to the main attraction of the PD tripod: compactness.

The PD tripod has by far the smallest folded size of any tripod with this set of capabilities.  This is of course the guiding principle in the design of this tripod.  It is why you are here.  The volume is about the same as a typical one liter water bottle, though at 15 inches of folded length it is longer and narrower.  It will fit easily in any normal pack or carry-on bag.  The small size has inspired me to carry the PD tripod in ways I would normally have never considered, such as in or strapped to the bottom of a messenger bag.  If the size of a tripod is what prevents you from carrying one, the PD tripod may be the difference between having a tripod on a shoot and not.

The rest of the specifications should be self explanatory or covered in detail elsewhere in this review.  One final note is that the tube diameters listed are for the widest part of the leg tube.  At the narrowest point, the leg is roughly 30% thinner.

The PD tripod comes in a high quality rectangular box with an elastic strap.  It follows the modern trend of high-end products coming in high-end packaging.  It is nice enough that you may consider keeping it as a container for storage. 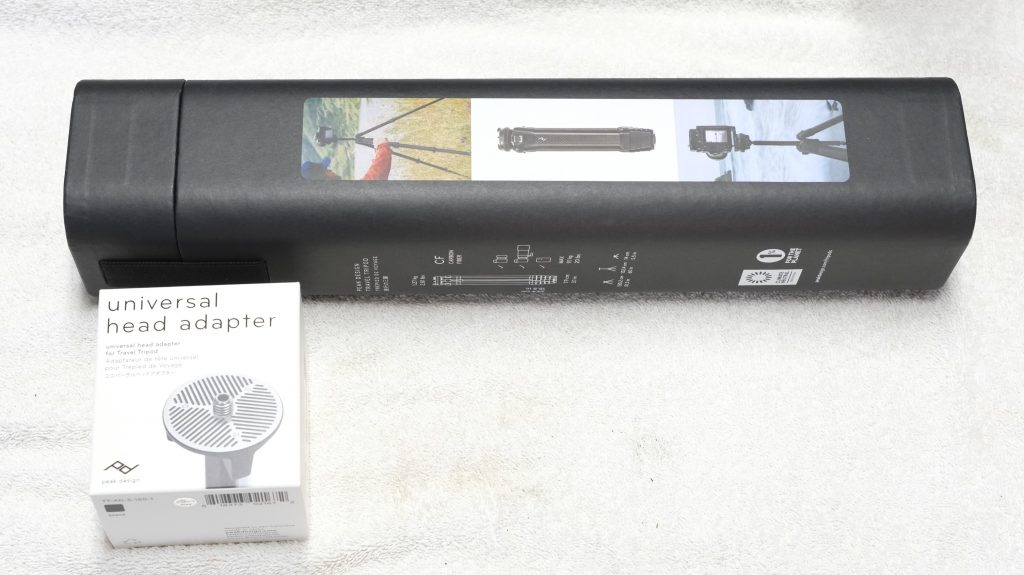 Included in the main box are several accessories shown below: 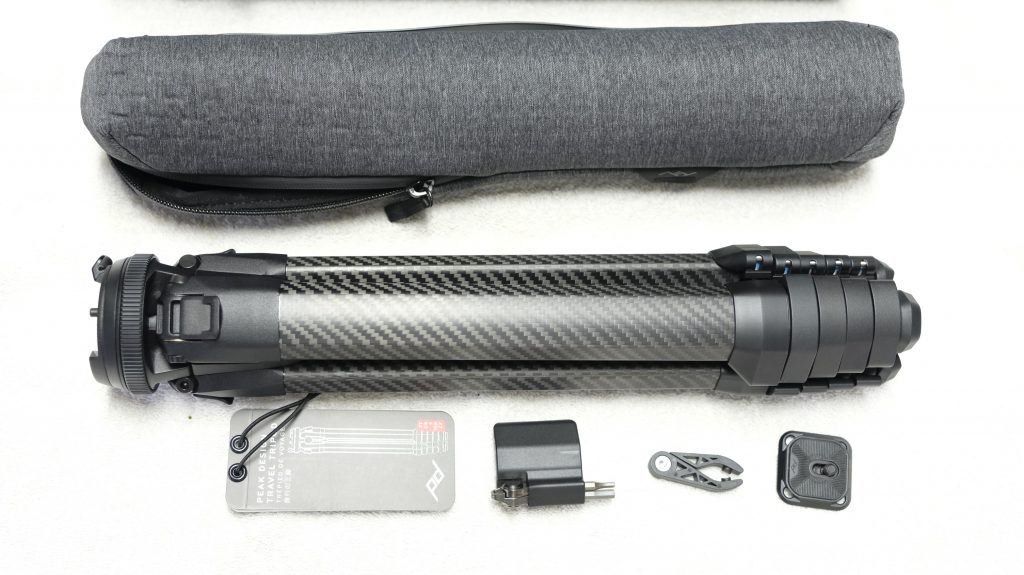 The grey case is nicely made in the standard Peak Design style.  It may be more appropriate to call it a sleeve, as it fits the tripod very snugly.  Some users have reported difficulty zipping it up with the tripod inside.  I can confirm that the tripod needs to be well seated into the bottom of the sleeve for it to close properly.  The upside of this snugness is that the case doesn’t add much weight or volume to the overall package.  I typically don’t use tripod cases as I find them a waste of weight and space.  I have found myself using this case somewhat frequently though, if for nothing else as to keep the tripod from bumping into the other things in my camera bag.

The hex key included with the PD tripod is a particularly nice touch.  The two hexes are joined by a hinge at the top.  When unfolded each hex provides a nice handle for the other.  The hex can be stored inside a small pocket in the case or in a plastic clip that secures to the inside of one of the legs as shown in the picture.  Either is a convenient way to carry the hex with you as it is necessary to remove the head.

Finally we have a small plastic claw tool for removing the leg sections for cleaning and the newest version of the Peak Design quick release plate.  This plate is of course compatible with the Capture Clip device that put Peak Design on the map.  The plate is on the small side for larger camera systems, but is a good match for the more compact systems that PD travel tripod is likely to be used for.