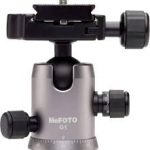 The MeFoto Q1 is the ballhead that comes standard with the MeFoto RoadTrip tripod and is not available to purchase separately.  That is all well since there is no reason that you would want to buy this head by itself.  It is a reasonable match in terms of performance and quality for the RoadTrip tripods, but not a high quality head in and of itself.

The stiffness of the Q1 is acceptable but not outstanding for its weight.  As a pairing for the RoadTrip legs, it is perfectly acceptable.  We typically look for a ballhead to have at least three times the stiffness of the legs.  In this case, the head is about six times as stiff as the legs, which is plenty.  The head is appropriately matched in terms of stiffness and weight as to not compromise the overall stiffness or weight of the system as a whole.

When analyzed in a vacuum, this isn’t a good ball head.  Frankly, the build quality is subpar.  The ball doesn’t fully lock down.  When the main lock knob is fully tightened down, the ball can still be moved if enough force is applied.  Most of the parts are molded as opposed to machined aluminum, and so it feel cheap.

The Q1 checks all the boxes for features we expect on a ballhead.  There is a separate panning lock and tensions control on the main lock.  The tension control works, but is imprecise.  I suspect most users will ignore it.  The arca clamp works just fine, but is on the large side for a head of this size.  This is the downside of using molded components.  It is more difficult to make them small.

If you are reading this, it is most likely because you are considering buying the Q1 as part of a MeFoto tripod package.  In that context, it is a fine head.  The whole tripod is built to a budget, head included.  If you are considering this head on its own, stop.  There are much better options out there.