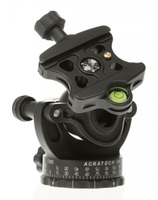 The Acratech GP ballhead is the most modern head in an evolutionary line that began with the original Acratech Ultimate Ballhead.  The Acratech Ultimate revolutionized what was possible in a lightweight, durable, ball head.  It instantly became the go to head for anyone carrying the gear for long distances in the field.  The rest of the industry has come a long ways since then, and so has Acratech.  The GP is in every aspect better and more versatile than its ancestor.  For photographers using a head in the harshest conditions, Acratech is still the go-to company, and the GP sits at the top of the line.

This isn’t to say the GP is the perfect ballhead for everyone.  Like every other product I have tested, it has its flaws, however minor.

At the time of the Acratech Ultimate, 1 lb for a professional quality ballhead was revolutionary.  Now, that weight puts the GP in the middle of a very crowded pack of midsize ballheads.  The size of the GP makes it best suited for pairing with an all-purpose style tripod.  It is a bit too large for most travel tripods, and not stiff enough to properly complement a full size systematic tripod.  The average overall stiffness of 3469 Nm/rad for the GP is good, but not exceptional.  We typically look for the stiffness of a head to be at least three times the stiffness of the legs.  The GP will thus be a good pairing for all but the stiffest all-purpose tripods, and still a reasonable pairing for those.  It isn’t enough stiffness to complement larger systematic tripods though, which are better paired with a heavier full size ballhead.

Our primary metric for ballheads is the stiffness to weight ratio, best viewed in context on the ballhead rankings page.  In this department, the GP is good, but not exceptional.  There are a number of heads in the same weight range that are significantly stiffer.  If getting every last bit of stability performance out of your system is your goal, I would direct you to one of one of those.  The stem on the GP connecting the ball is longer and thinner than I typically like to see.  I suspect this is the weak link, reducing the stiffness performance.  The ball on the GP is also a bit smaller than we typically expect on a midsize head, but this isn’t an issue.  A ballhead is far more than just its stiffness to weight ratio though, and its in durability that the GP really shines.

Like all of Acratech’s heads, the GP has an open design.  Instead of the ball being fully enclosed by a housing, as is traditional, the ball on the GP is clamped between two aluminum bars.  This means that the bottom of the head is exposed, allowing dirt and debris to fall through instead of getting trapped inside the head.  This may sound like a minor feature, unless you have ever had a ballhead fall into sand.  Sand can instantly render a head into a useless grinding mess.  Cleaning requires complete disassembly.  With the Acratech though, you can simply put the head under some running water, or a stream, or lake, or whatever is on hand.  This can save a shoot.  Most photographers don’t shoot in such adverse conditions or manage to keep their ballhead out of the dirt.  If that doesn’t describe you though, the Acratech should be at the top of your list.

The GP has all of the features that we have come to expect on a modern ballhead.  The head includes an Arca-style clamp in both screw and lever release versions.  The ball head is tightened via a large lock knob.  This lock knob is grippy and has one of the most under appreciated features of the GP.  The threading on the lock knob is rather coarse, meaning that the knob only takes one turn of the hand to lock the ball up.  This dramatically speeds up operation of the ball head compared to most others.  The tension of the head can be independently adjusted by a knob opposite the main lock.  Finally, there is a panning lock knob on the base.

Unfortunately, this panning control is a weak point on the head.  It is also coarse threaded, but this means that I cannot tighten it down enough to fully lock.  When the head is on a tripod and I twist the top of it hard enough, the panning base will rotate.  This doesn’t affect the performance of the head.  No forces in the course of normal photography would ever be close enough to overcome the amount of static friction that is there.  However, as I am writing this, the head is currently stuck on the pair of RRS TVC-33 legs I used to take example pictures of the head in gimbal mode.  When I try to twist it off, the panning just rotates.  I am going to have to get a pipe wrench to get it off.  Very obnoxious.

Acratech is the only ball head to advertise a built-in gimbal feature.  I use this phrasing, because most ballheads are technically capable of what the Acratech advertises for the GP.  When the ball is laid horizontally into the drop notch and the panning base is unlocked, a large telephoto lens can move freely and without flopping over, as if it were on a gimbal.  Where the Acratech is different is that the stem of the ballhead is designed to rotate smoothly in the drop notch, and the bottom of the ball has a nub that slots into a groove to support the weight of the lens across the ballhead.  So yes, Acratech GP is properly designed to function as a gimbal in this manner.

The main problem with this makeshift gimbal is that the lens is not in line with the main axis of rotation.  So when panning the camera, the horizontal position of the camera moves dramatically, making it difficult to track a subject in the viewfinder.  Because of the low position of the camera, you will also have to find yourself attempting to navigate around the tripod legs.  This isn’t a replacement for a true gimbal when using long telephoto lenses.

Overall I really like the Acratech GP.  The flaws on the head are relatively minor.  They are lab flaws that appear under close examination.  When used in the field, they are relatively insignificant compared to the advantages in durability and usability that the GP brings to the table.

If you work in dirty or sandy environments, the Acratech GP should be the #1 ballhead on your list.  The open and easy to clean design of the GP will allow you to confidently get the shot when most other heads may fail.  Equipment reliability is more important than incremental increases in stiffness or weight reduction.  On the other hand, if optimizing stiffness or weight of your system is more important to you, there are better, and often cheaper options out there.  As an all around all purpose ball head, the Acratech GP is one of my favorites, and I highly recommend it.  As always, just make sure it is the right head for you.

The Acratech GP is available for purchase at Amazon, Adorama, and Ebay.  Using these links to make a purchase helps fund the testing of more tripod and head on this site.  If you do use these links, please drop me a message with what equipment you want to see tested next and I will make it a priority.  Thanks, -David