Across camera support equipment, weight rating is the one quantitative metric supplied by the manufacturer that is supposed to be indicative of the performance.  Unfortunately there are no agreed upon standards or definitions as to what this weight rating actually means.  It is simply a made up number by the manufacturer that sounds good to the marketing department and that could plausibly be defended by the engineering department.  As we saw for tripods, this results in weight rating inflation and a tendency for exaggeration.

Tripods are relatively simple and their performance can be accurately summed up in their stiffness and damping characteristics.  Tripod heads however are more complex and varied in their design.  It is thus more difficult to capture the performance of the head in a single metric.  The maximum torque that can be applied to a head before it slips, the shift in framing when locking the head, and the geometry of construction all contribute to the performance in a way that isn’t captured by looking solely at the stiffness of the head.  With that disclaimer out of the way, stiffness is still the most important property of head when it comes to supporting weight.  Stiffness is what keeps things still, the difficulty of which increases with the size and weight of the gear used.

If we plot the manufacturer’s weight rating vs the stiffness of the head measured on this site, we get the following array: 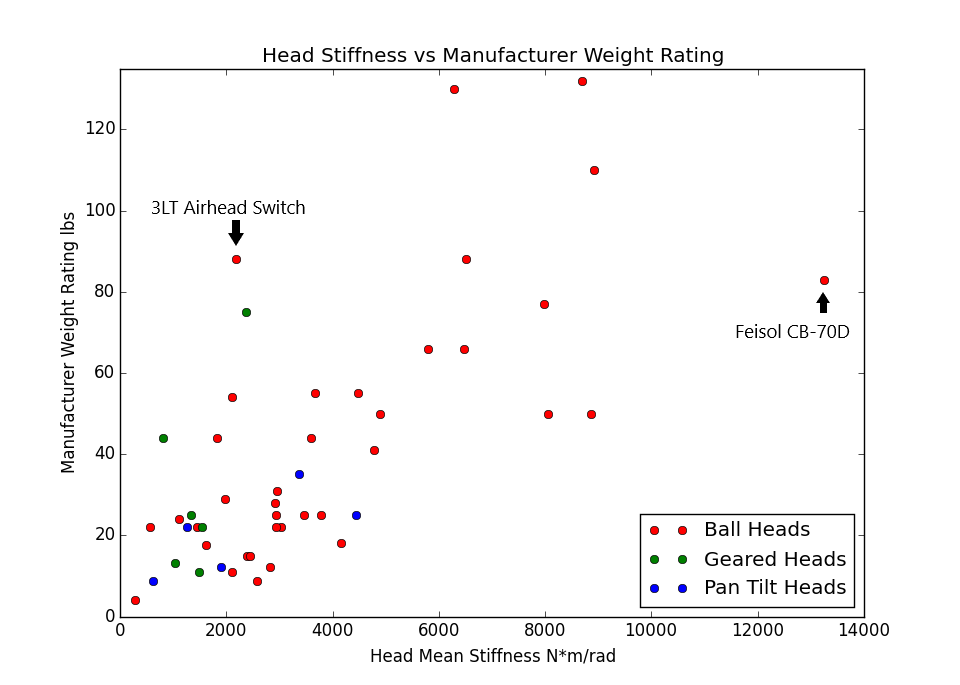 What we see is similar to the situation for tripods.  Any given weight rating represents a huge range of possible stiffness’.  While the data here is of course not actually random, I could find no pattern to predict the stiffness performance of a head based on other factors such as the cost or reputation of the manufacturer.  The ball diameter and more importantly the width and height of the stem do correlate strongly to stiffness, but that is the subject for another post.  All we are trying to do here is discredit the weight rating.  If the measured stiffness data isn’t available, like with tripods, it is much better to focus on the geometry of the construction rather than the manufacturer’s weight rating when trying to evaluate performance.

To highlight the absurdity of the situation, compare the performance and weight rating of the 3 Legged Thing (3LT) Airhead Switch and Feisol CB-70D.  The Feisol is the largest diameter ball head I have tested and by far the stiffest.  It is an absolute beast that is only at home on the largest series 4 & 5 tripods.  The Airhead Switch is a compact and lightweight ball head designed for travel tripods.  It isn’t a bad head and sports a reasonable stiffness/weight ratio, but is nearly an order of magnitude less stiff than the Feisol.

In addition to stiffness, there are a couple of other factors we have referred to previously that could clearly be related to the effective load capacity of a head.  Before addressing those, lets dismiss the one that clearly has no direct correlation.  With tripods, enough weight can plausibly splay the legs out so much that they break.  While this is not the preferred way to generate a weight rating for tripod legs, this is the strategy some companies employ.  For heads though, it is implausible to think that we could physically destroy one simply by loading weight on top.  Of course in possible with enough pressure, but metals such as aluminum have incredibly high compressive strength as can be seen here.  I’d love to see what happens to a ball head under a hydraulic press, but it wouldn’t further our practical understanding of camera support.

If the force isn’t directed straight down on the head, we would expect the first failure point to be the friction device locking the ball or tilt axis in place.  When the camera is positioned off to the side of the head, it will generate a torque about the rotation point (usually the center of the ball).  A heavy enough camera could generate enough torque to break the friction holding the ball, causing it to flop to the side.  I have contacted several manufacturers who use some variation on this method.  As shown in the image below, Acratech has publicly shown this as their test setup.

Technically, this is a torque specification, and to translate to a weight capacity specification they assume a certain distance that the camera will sit from the ball when attached.  This becomes problematic as larger and heavier optics tend to have big lens feet that push the weight of the imaging system further from the ball than you find for lighter setups.  Overall though, this is at least a rational basis on which to assign a weight rating.

Unfortunately, it still produces some irrational results.  Take for example the Highline Ball Head by the Colorado Tripod Company, which is rated by this method to hold 70 lbs.  The Highline is a reasonable head, but no sane photographer would ever attempt to use it to support 70 lbs. of gear.  Even with an infinitely stiff tripod, the vibrations allowed by the head while supporting 70 lbs would take many minutes to damp out.*  This is unacceptable for any kind of workflow.  I am only picking on the Highline head here because to their credit, the Colorado Tripod Company has talked about how they rate their heads.  In practice, no ball head is appropriate for holding significant amounts of weight simply due to their ergonomics.

“Any of our heads will easily hold the weight of the big telephoto lens but it is awkward with ANY ball head when re positioning something large and heavy on a round object. Think of an elephant balancing on a ball.”

Correctly adjusting the tension on the ball head can help.  Here is where the size of the ball matters.  A larger ball has more surface area to provide the correct amount of friction without locking up.

Geared and pan-tilt heads are ergonomically more adept at supporting weight than their stiffer ball head counterparts.  With a ball head, the yaw, pitch, and roll axes of adjustment all lock down simultaneously.  This can be convenient, but with a larger and more cumbersome load on the head it can also be frustrating.  A pan-tilt head allows you to adjust each axis independently without disturbing the others.  A geared head does one better and allows for minute and precise adjustments as well.  Better still, the design of many geared heads such as the venerable Arca Cube place the center of rotation at the camera, reducing the effective inertia mass of the system and taking the weight out of the users hands in a similar way to a gimbal.  Most people find these tools much more capable of efficiently positioning larger loads than ball heads.  In this case, the stiffness number alone does not adequately capture the overall performance of the head.  Stiffness is of course still important, and the only thing the holding the camera still against external forces.

A quick note on gimbals:  The heaviest photographic gear is typically used on a gimbal setup.  The point of these is to ease the handling of a long lens by placing the center of mass at or below the rotation point of the head.  Absolute stiffness isn’t as important because gimbals are usually used to support gear, not lock it in place.  The weight rating may here is worth paying attention to, much more so than for other types of heads.  But again, I am unaware of any universal standard by which the weight rating is created.  Take it with a proverbial grain of salt.

The summary for this article was dropped in my lap after Manfrotto finally got back to me on their weight rating system:

“Unfortunately, there is no industry standard for determining the weight capacity of tripods and heads. Each brand goes through their own process to determine the weight load of their products. With that said, the actual method is proprietary and I am not permitted to go into detail about it.”

When I see the term proprietary in this context, I can only assume a manufacturer means “We don’t actually have a rigorous method for testing and don’t want to admit we just make it up.”  Given that the industry doesn’t have any standard for measuring weight ratings, please don’t refer to the ratings as if they had any useful relation to the support of photographic equipment.

*We are even making some optimistic assumptions.  To make this calculation yourself, use the damping time equation from “Calculating Damping Time“, and an estimation of MOI for a 70lb piece of gear from here.  Fill in the rest with some reasonable assumptions.