The most common performance metric listed on spec sheets for tripods is the weight rating.  This is supposed to represent approximately how much weight the manufacturer believes the tripod can reasonably support.  The problem is there is no standard definition as to what ‘reasonably support’ means.  Tripod manufacturers use different test methodologies, none of which are public, to determine the weight rating.  Because there is no way to verify these ratings, there is nothing to stop the manufacturers from inflating their own ratings, short of having very disappointed customers.  My recommendation to those in search of a tripod is to completely ignore the listed weight rating.

For example, the Sirui T-025X is one of the smallest and lightest travel tripods available, and is well regarded for those qualities.  The stiffness unfortunately suffers as a result, making it one of the least stiff tripods I have tested.  Yet, it is rated to hold 6kg, or 13.2lbs, roughly the weight of a 600mm f/4 lens and attached pro DSLR.  While the T-025X will physically support such gear without collapsing, the tripod was clearly not designed for such use.

I am making the assumption here that the weight rating applies to photographic and video equipment, as this is the intended use.  Heavy imaging equipment also tends to be physically large and bulky.  As the vibrations on a tripod are predominantly rotational in nature, the appropriate measure of load is the rotational moment of inertia (MOI) of the camera and lens, which depends on the size of the equipment as well as the weight.  A tripod may be able to hold a 10 lbs of exercise weights easily, but a 10 lb super telephoto lens will feel incredibly unstable.  So, even if there were a standard way to calculate weight ratings, it is a poor metric to use.

I have argued on this site that the tripod’s stiffness is the single best metric for judging its stability¹.  Stiffness is by definition the ability of the tripod to perform its central function, keeping the camera still.  Stiffness can be measured accurately, and is directly comparable across all tripods.  Armed with the data on this site, we can see just how meaningless the the weight rating is as a metric for stability.  The following plot shows the weight rating versus of stiffness for every tripod I have tested²: 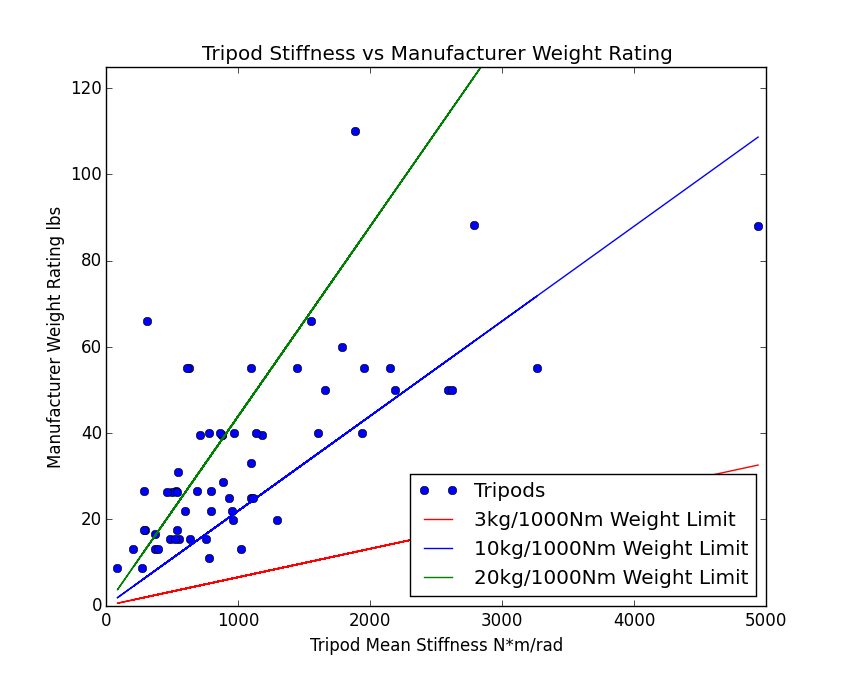 It is not completely random, there is some correlation, but for the purposes of choosing a tripod, it may as well be random.  For tripods of a given weight rating, the stiffness varies by roughly a factor of 5.  Tripods lower and to the right of the graph are rated more conservatively.  Those in the upper left have been rated generously.

If you are a tripod company trying to figure out what your weight rating should be, 10 kg for every 1000 Nm/rad of mean stiffness seems to be on the conservative side of average for how tripods are currently rated.  20kg / 1000Nm would be on the more optimistic side.  If I had to give a weight rating for tripods, I would say something like 3 kg (~6.6 lbs) for every 1000 Nm/rad of mean stiffness is appropriate for general use.  Before someone comments “But I put X heavy gear on my lightweight tripod and it held it just fine!” or “I really struggled with my 100-400 on my large tripod in the wind.”, yes, I agree with you, weight ratings are dumb, and produce dumb results.  3 kg/1000Nm is just the metric that seems to best approximate my experience with tripods and photographic equipment.

Even within a single brand, there isn’t total consistency.  The following chart breaks out some specific tripod companies by color. 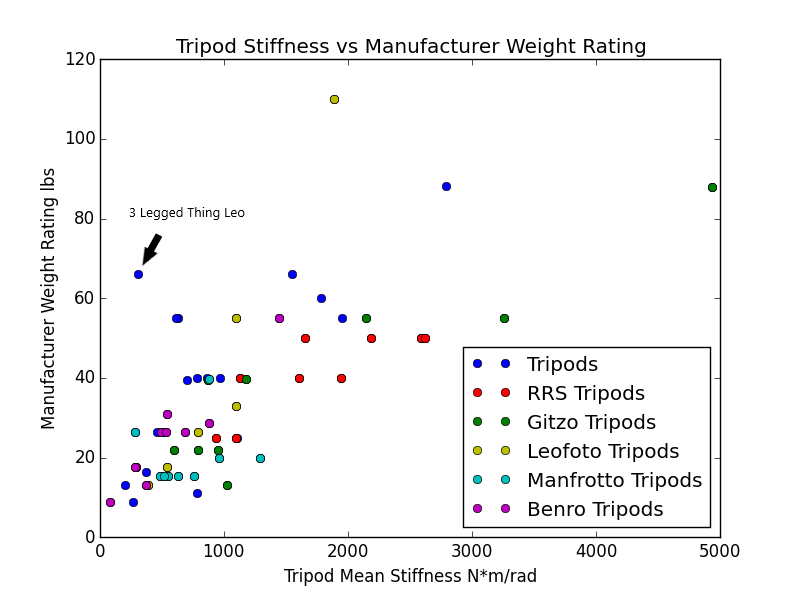 The premium brands tend to be more conservative with their weight ratings, but there is still significant variance.  For example RRS gives a weight rating to a whole series of tripods.  All of their Series 2 tripods are rated for 40 lbs (~18 kg) but there are significant differences in stiffness between the models.

The most egregious offender in terms of exaggerating the tripod’s weight capacity is very clearly the 3 Legged Thing Leo.  It is one of the weakest tripods I have tested, yet has the 4th largest weight rating at 66 lbs (30 kg).  I reached out to 3 Legged Thing for comment on their anomalous weight rating, and this is their reply:

Leo is tested with weight loads until he breaks, and can handle much more than 30Kg although we’d not advise it, so 30Kg is the safe weight limitation.

Moving past the rather morose consequence of personifying a tripod when testing it to destruction, this is a defensible definition of a weight rating.  However, clearly not one that has any reasonable relation to supporting photographic equipment.  The largest commercially available camera lens is the Sigma 200-500 f/2.8, which weights in at just over half the weight rating at 15 kg.  If you mounted this on a Leo tripod, it would flop about like a fish out of water, and you wouldn’t take your hands off of it for fear of a slight breeze toppling it all over.  But the tripod legs wouldn’t break, even if you mounted a second 200-500 right next to the first.

Really Right Stuff takes a more realistic approach in their tripod guide.  They de-emphasize the physical weight rating of the tripod (while simultaneously showing the owner of the company hanging from their smallest tripod) in favor of a rough focal length limit.

A true support will not only be rigid, free-standing and load-bearing, but should also dampen enough vibration to allow the camera and lens to resolve fine detail at their maximum clarity and sharpness.   …

Most photographers, however, are using gear that weighs much less than those [weight] ratings. Technically the smallest tripod, our TFC-14, could hold a 500 or 600mm lens without collapsing. So why don’t we recommend that combination?  It all comes back to vibration …

This closely mirrors my experience in testing for this blog.  Focal length and overall bulk have a greater correlation to the demands placed on the tripod than does weight.

[About] our 20lb weight rating. Here’s what that means: you can put a 20 lb. object on top of the Travel Tripod and it will still safely function. Can it hold more without collapsing? Yeah, a lot more. It takes about 85 lbs. of downward force before the center column starts to slip. Do we recommend using the Travel Tripod as your go-to solution for holding 20 lb. objects? Not really. Just because it can hold 20 lbs. doesn’t mean it’s optimized for it.

This is also a sensible interpretation of what rating should mean.  I have not seen such discussion on the actual meaning of their weight rating from other tripod companies.  If you have seen more information the issue that I have missed, please let me know.

If weight rating is a poor metric for stability, guidance, and comparison, we are going to need something to replace it.  The weight rating has been so pervasive in the industry simply because it is easy to understand, and for the consumer to measure the weight of their equipment.  While an MOI rating would be more accurate, it isn’t practical for the consumer to measure the MOI of their equipment (though it can be estimated accurately).  It also doesn’t account for the magnifying effect of long focal length lenses and high resolution sensors, which require more stability.  A maximum focal length recommendation could also work, but has its own issues.  A 400mm f/2.8 clearly requires a very different support than a much lighter and more compact 400mm f/5.6.

This blog does not yet have a gear limit recommendation for a given tripod.  It is important to me that, unlike the current weight rating standard, any such recommendation is backed by data and relates to the real-world experience of using a tripod.  While we have some preliminary data that moves us towards that goal, we simply aren’t at the point yet of making a specific recommendation that photographers will rely on.

In the meantime, stiffness and damping can be measured with accuracy, are the best metrics for characterizing tripod performance, and are useful for comparing tripods to each other.  You can leverage your experience with one of the tripods tested here (or similar) to get a reasonable feeling for how the others will perform based on the difference in their stiffness.  Photographers expect very different things from a tripod based on their gear and the conditions they shoot in.  Arctic winds necessitate a very different support than the controlled environment of a studio.  A small travel tripod can be infinitely better than the sturdy beast that gets left at home.  A $5 cable release can make a bigger difference than a $1000 tripod.  An accurate accounting of your requirements for a camera support and a little common sense will get you a lot farther towards choosing a tripod than a meaningless weight rating.