In order to accurately calculate damping times, we have been measuring the moment of inertia (MOI) for the various bits of a tripod setup.  In the last post we looked at the MOI of the tripod legs.  Here, I am going to be using the methodology described for measuring the MOI of a camera to test the MOI for some ball heads.  By looking at the change in resonance frequency with the head on and off the tripod, we can back calculate its moment of inertia.

Below are the raw results for two of the largest ballheads I have at my disposal, the RRS BH-55 and the Feisol CB-70D.  I don’t normally post the raw results, since, they aren’t that interesting, but in this case they are critical to showing why this test hasn’t worked well. 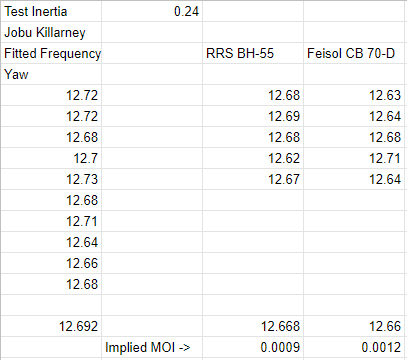 The leftmost column shows ten trials of measuring the resonance frequency of the tripod and test rig without the head.  The other two columns show five trials for each of the two heads I tested.  Note how little change there is.  The standard deviations of each data set would overlap with the means of the other data sets.  In theory we could just build up enough statistics to get a reasonable standard error on the measurement, but in practice this incredibly time consuming and highly dependent on the assumption of Gaussian statistics.

Compared to the camera and tripod MOIs that we have measured so far, the MOI of the heads measured here are insignificant.  Despite being heavy, the heads are compact with their mass located close to the axis of rotation.  For example, lets look at the CB-70D and calculate its MOI by approximating it as a solid cylinder.  The MOI for such an object is given by:

From the CB-70D review page, we can see that the mass is 0.971 kg and the radius as measured from the base diameter is 4.2 cm.  That gives us an MOI of 0.00086 kgm^2.  This is in the ballpark of what we measured above.  Given the error in our measurement and the crudeness of this approximation, these results are in enough of agreement to form a reasonable sanity check.  Because I am barely able to measure the MOI for the largest heads I have, any of the smaller ones are going to read effectively zero.  Going forward, if we need to use the MOI of a head for any reason, we will simply make a rough approximate calculation.

I also attempted to measure the pitch MOI, with similarly poor results.  But lets talk about pitch MOI briefly.  For yaw, the axis of rotation extends up through the middle of the tripod and so the head will always be centered on that axis.  For pitch, the axis of rotation is horizontal and extends roughly through the point in space where the imaginary lines representing the center of each leg intersect.  Typically this is somewhere in the middle of the head, depending on the width of the top plate and apex.  For tripods with a center column though, the MOI of the head and camera in the pitch direction will increase dramatically as the center column raises them up and away from the center of rotation.  There is much more to investigate on this, and will be a theme in our future discussions on center columns.

Next up:  Camera and Lens MOI