Our goal in measuring the moment of inertia (MOI) (also known as angular mass) of various camera systems and supports is to be able to make a reasonable calculation of damping time based on the stiffness and damping characteristics of the tripod in use.  In the previous post, we discussed the methodology for measuring the MOI for cameras and lenses, a technique that will apply equally well to tripod heads.  The tripod itself though is dynamically very different when subject to vibrations.  The feet stay still while the rest of the tripod experiences an angular displacement proportional to its distance from the apex.  So what we want is to understand the effective amount of inertia that the tripod has when used under typical conditions.

and observing the resulting change in

we can fit the data to the function above and extract the MOI of the tripod.  This method is highly dependent on having a very accurate estimate of the MOI of the test mass, which in our case here is questionable.  Using simple MOI formulas for basic objects, I suspect that we can get within 1% or so.  Again, this is plenty accurate for our stiffness tests as it would throw off the test by that percentage.  Here though, the error would be added to our result, which can throw it off wildly. 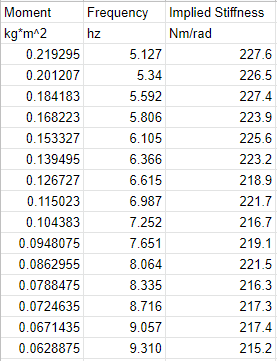 To test this method, I picked out one of the smallest, lightest tripods I have at my disposal, the Leofoto LS-224C.  If any tripod should display a MOI close to zero, it is this one.  I used a much lighter MOI for the test mass than I typically do to maximize the effect that the tripod’s MOI should have on the data.

The raw results are shown in the table to the right.  The test MOI is shown in the leftmost column, then the resulting measured frequency.  The implied stiffness is the yaw stiffness of the tripod calculated from the MOI and frequency of that row.  I typically use an MOI of about 0.4 kg*m^2 for tripod stiffness testing, and at that mass, we measured a yaw stiffness for the LS-224C of 230 Nm/rad.  As we reduce the MOI of the test mass, we see the implied stiffness drop indicating that the MOI of the tripod is becoming relevant.

and the tripod’s MOI.  The results are displayed below: 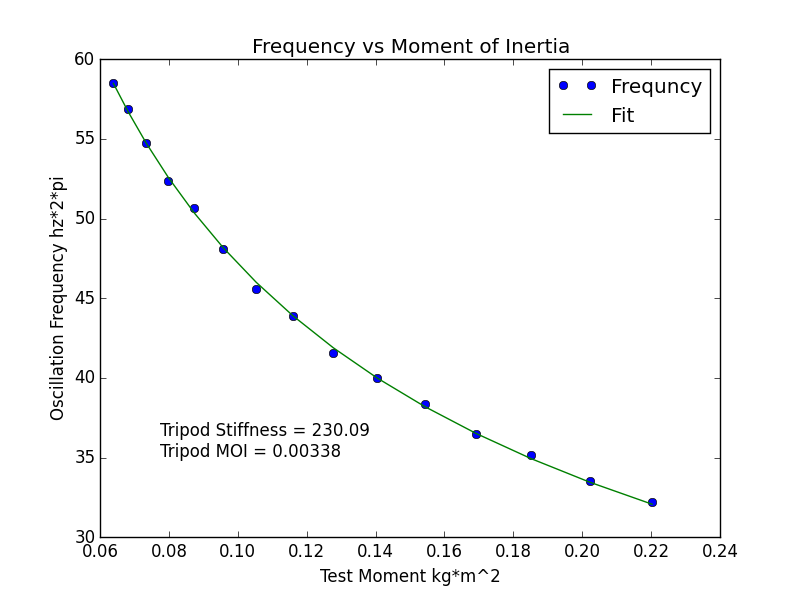 First off, the fitted tripod yaw stiffness is at 230 Nm/rad, exactly what we had calculated previously with the larger MOI test mass.  This is a great sanity check on our methods.  Second, the tripod MOI is fairly small at roughly 0.003 kg*m^2.  This is a fairly plausible value.  It is small but positive, exactly what we expect to see for this tripod.  It means that we are successfully calculating the test moment to less than this value in error.  We should not take the 0.003 kg*m^2 value for the tripod as particularly accurate.  It is probably within about 50%.  What it does mean though, is that we can take our future measurements for the MOI of larger tripods to be reasonably accurate.

For reference, in the previous post I measured the GFX 50S with the smallest lens at 0.004 kg*m^2, so in this case the tripod MOI is less than that.  Given how small the LS-224C is, it is reasonable to expect most tripods to have significantly higher MOI, and thus dominate the total MOI of the system (camera + head + legs).  For the purposes of damping calculations, it will thus be imperative to get reasonable measurements of tripod MOI.  It remains to be seen whether or not I need to calculate the MOI for each tripod during testing.  I certainly hope not as this is a rather time consuming process.