So far on this site, we have focused most of our research on understanding the relationship between tripod stiffness and conditions.  Damping however, is also incredibly important but affects tripod performance in a very different way.  In this post I want to lay the mathematical foundation for the testing we will do towards understanding how much damping we want to see in a tripod.  This will be technical, but is a necessary brick in the foundation towards building an understanding of tripod performance.

Our focus on stiffness in understand the effects of wind is well founded.  Wind varies on a much longer time scale than that of the resonance frequency of the camera-tripod system.  This means that damping will do nothing to help keep the camera still and the image sharp during longer exposure times.  It will of course still help the camera return to a neutral position after a push from the wind more quickly.  This is helpful and can reduce the total amount of motion blur in the image, but cannot eliminate it in the way that stiffness can.  This dynamic motion is interesting and will be the subject of future research.  For now though, I want to start simply and develop a framework for much more basic problems in damping.

Many informal tripod tests floating around the internet revolve around the settling time for a tripod after an impulse is applied.  The test will usually be conducted as such:  Place a large lens on the tripod and then give it a little push.  Then measure the time before the vibration in the viewfinder settles.  This method does correlate with tripod performance, but not in a way that clearly distinguishes between the effects of stiffness and damping or the value of each.  It is neither repeatable nor well defined in what it means for the image in the viewfinder to be ‘still’.  Here, we are going to formalize this style test and relate it back to real world tripod use.

When handling the controls on a tripod mounted camera, we exert more torque onto the camera than it will typically receive from wind.  We cannot reasonably expect the tripod to hold the camera still to within the pixel level under such forces.  This is mostly true for telephoto lenses.  We all know it is possible to obtain sharp images with a physical shutter press for shorter focal lengths and shutter times.  We have also all had to wait for the camera to settle after handling the controls with a longer lens.  It is this settling time that we want to ensure is not a hindrance towards workflow.  Exactly how much settling time is acceptable will of course vary between photographers, but we will need to accept some standard amount of time.  I will propose 1 second, as cameras typically have a 2 second timer and we need to leave some small amount of buffer time for the finger to come off of the shutter after pressing it.  If a different amount of time seems more reasonable to you, please say so in the comments.  I will adjust the standard to consensus.

Drawing from the test methodology post, after an momentary impulse of torque such as the touching of the camera, the angular position of the camera will be given by:

is the initial amplitude of the vibration.

Because we are only focused on the decay of the vibration, we will throw out the cosine oscillation term and are left with:

We are going to assume that the initial displacement (or initial amplitude of vibration) is caused by a torque that is slow compared to the resonance frequency.  A good example of this would be touching or nudging the camera.  A bad example would be the mechanical shutter, which moves very quickly.  So, we get:

is the torque from the impulse and

is the stiffness of the tripod.  Following our previous standard for pixel level sharpness, we want the amplitude of the vibration to reduce below:

is the focal length of the lens and

is the pixel width.  Putting everything together we get:

is the damping constant and

is the moment of inertia.  Solving for

we find that the time required for the tripod to damp vibrations down below the pixel level is:

This is far less neat than our calculations of required stiffness.  We find that the amount of damping time depends on a lot of factors.  Even if you ignore the pixel level requirement and just look at how long it takes for the viewfinder to get still, the damping time is still dependent on the tripod stiffness, torque, and inertia on the load on the tripod.

This formula can be interpreted more intuitively in graphical form: 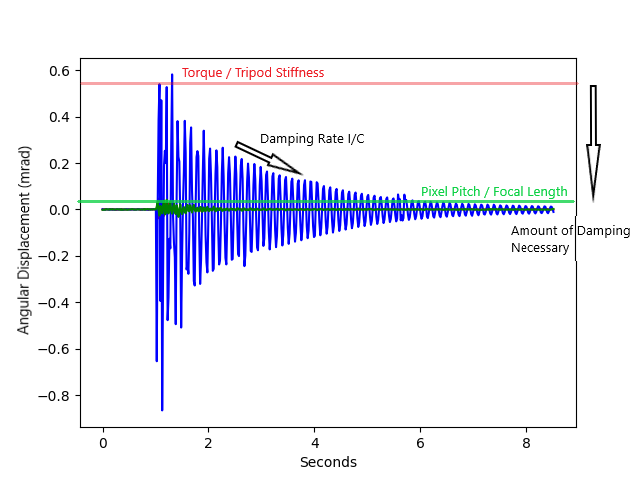 In red we have the initial displacement caused by whatever torque happens to be acting on the camera.  In this case it may be operating the camera’s controls or pressing the shutter button.  The green line shows when the camera has settled to a point where any motion is too small to cause blurring in the image.  The difference between these two lines is what is given inside the natural log term in the damping time formula above,

.  The stiffer the tripod used, the initial displacement (red line) will be smaller.  With a sufficiently stiff tripod, the red line can drop below the green line and therefore zero damping will actually be required.  This is also the scenario we require when we want the camera to remain still, for example, during a long exposure with light winds.

to the damping constant

.  The higher the damping constant, the fast the damping occurs, and the more inertial mass placed on the tripod, the slower it occurs.  This has an interesting consequence.  Minimizing inertial mass is just as important as increasing the damping of the tripod when it comes to settling time.  Hold that thought for a future post.

We have slowly been assembling all of the data to solve this damping time equation.  Pixel pitch and focal length are just pulled from the camera’s specifications.  Tripod stiffness is well understood and measured at this point, and we have some data regarding how much torque is placed on the system.  What we don’t have is any measure of the moment of inertia of the cameras and lenses we are asking the tripod to hold.  This will be our final necessary piece of information.  So, when you see a post in the near future measuring the inertial mass of various equipment, don’t think that this blog has gone completely off the rails into the most boring possible subject.  There is a good reason we need to know.