Conventional wisdom has long been to use a cable release when shooting off of a tripod to eliminate any movement of the camera caused from physically pressing the shutter.  I agree with this wisdom, but needed to put it to a quantitative test.

For this test, I placed the Fuji GFX and 120mm GF lens on a couple different tripods.  The first was a very stable RRS TVC-33 and BH-55 ballhead.  This is the standard for what people generally consider to be a very high quality tripod setup.  The second was a Feisol CT-3342 Tournament and Sirui FD-01 pan-tilt head.  While no slouch, this setup is notably weaker than the RRS one.  I am not listing exact stiffness here because the connection between the RRS L-bracket and the camera appeared to be a significant, and unknown contributor to the stiffness of the system as a whole, and the point I am presently trying to make isn’t exactly dependent on overall tripod stiffness.

Previously, I measured the amount of torque placed on the camera when I was pressing the shutter button.  I observed large enough torques to indicate that only the very stiffest tripods ( much more so than the RRS-TVC33 ) could hold the camera steady enough for razor sharp pics when pressing the shutter manually.  Those torques occurred on a fairly slow time scale though, and so it was an open question as to what shutter speeds would be most detrimentally affected.

Here, I use MTFmapper to measure the sharpness of images in cycles/pixel (higher values = sharpe  images) for a range of shutter speeds.  At each shutter speed I take 3 images and report the average MTF observed from the set.  As always with camera shake, there is variance between the shake observed in each image so the data is somewhat noisy.  Below is the plotted loss in sharpness observed when not using a cable release for the two tripods referenced above as well as a control tripod.

The results largely speak for themselves.  At faster shutter speeds around 1/60s and above, we observe virtually no loss in sharpness from pressing the shutter button by hand.  Slower than 1/60s, and we begin to see a steady decrease in the average sharpness of the images that doesn’t appear to stop even at the slowest exposure time tested of 2 seconds.  The stiffer TVC-33 did a better job at holding the camera steady by approximately 2 stops, but there will still plenty of soft images.  The relatively small and lightweight Peak Design Travel tripod had no trouble holding the camera steady while a cable release was used to trigger the shutter.  Use a cable release.

If a cable release is not available, using the camera’s built in 2 second timer can also work.  The plot below shows the same data as above except that RRS data was removed and replaced by another series taken with the Feisol and a 2 second timer. 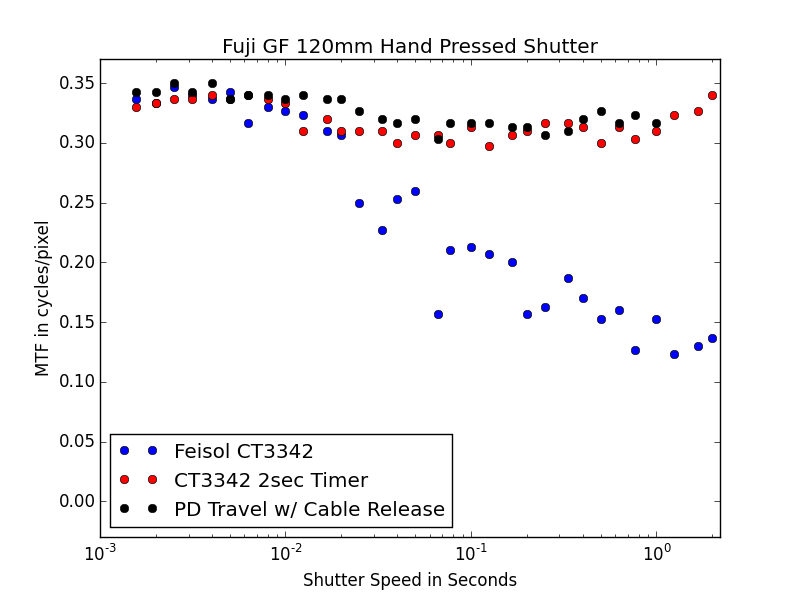 When the 2 second timer is used, I observed no loss in sharpness.  This is of course dependent on the damping of the tripod being sufficient to steady the camera in under 2 seconds.  Cameras also typically have a 10 second timer, but this isn’t practical for real world shooting.  For analysis on exact damping times, stay tuned.

Note that the loss in sharpness observed in these plots is not huge.  Above 0.30 cycles/pixel, the images are stunningly tack sharp in a way that only the very best lenses can achieve.  At 0.25 and above, the images still look pretty sharp to the eye, though in a head to head comparison it is clear some fine detail is being blurred.  On its own though, you would still label this image as sharp.  0.20 is still pretty good and probably usable.  0.15 shows some noticeable blurring when viewed at 100%, but could still be used for smaller prints.  See the previous post for some examples.  So we aren’t talking about massive losses in sharpness here.  But if you are spending the big bucks on the best glass, get a $5 cable release too.

I have received some flak for using MTF 50 for this analysis vs. MTF 20.  Here is the data set for hand pressing the shutter with the CT3342 tripod using both MTF 50 and MTF 20: 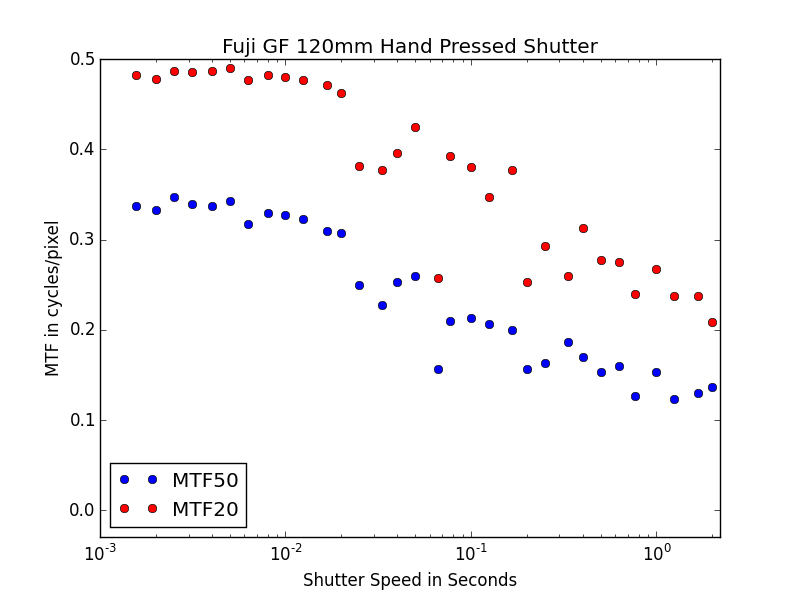 The results are essentially the same, but as expected, MTF20 occurs at higher spatial frequencies.  MTF20 is a much noisier measurement as the MTF is not particularly well behaved in general for looking at the loss of sharpness due to image shake.  For example, here is a particularly poorly behaved MTF curve for an edge showing significant image shake: 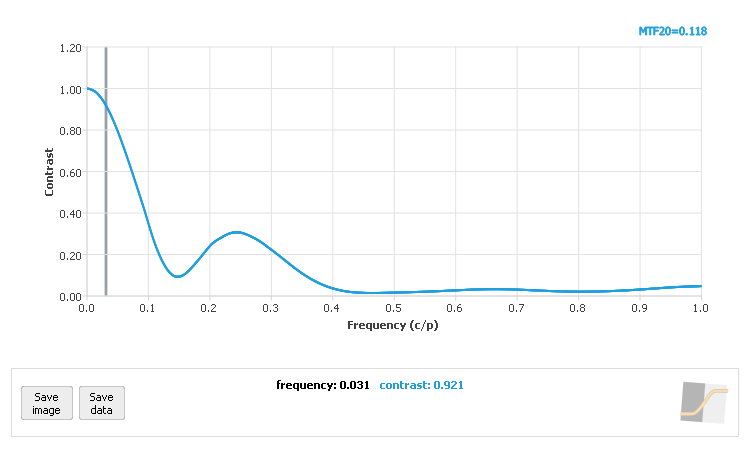 A properly behaved edge showing only a little bit of image shake is as such: 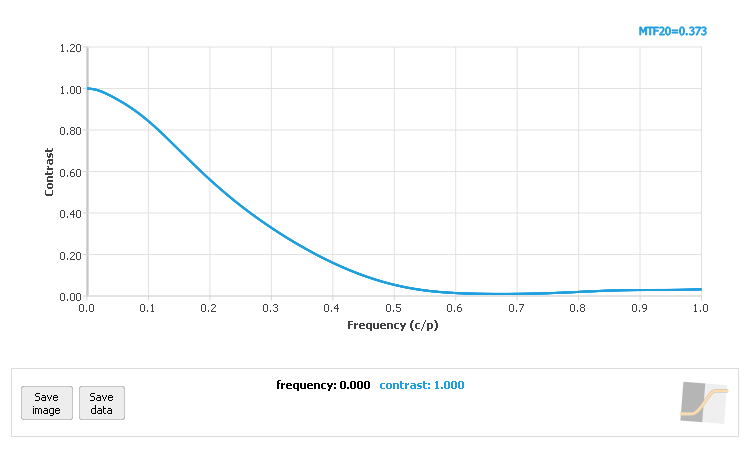 10 thoughts on “Sharpness Loss from not Using a Cable Release”