Understanding how much torque is put onto cameras during shooting conditions is the last piece of the puzzle towards understanding how much tripod stiffness is necessary.  Previously we had looked at the amount of torque placed on the GFX cameras under real world wind conditions.  Those results were useful, but the variance in real world wind conditions made testing difficult.  I found that a household fan was not powerful enough to generate significant torque on cameras.  In the comments of that post CarVac suggested using a leaf blower, which is what I implemented here. 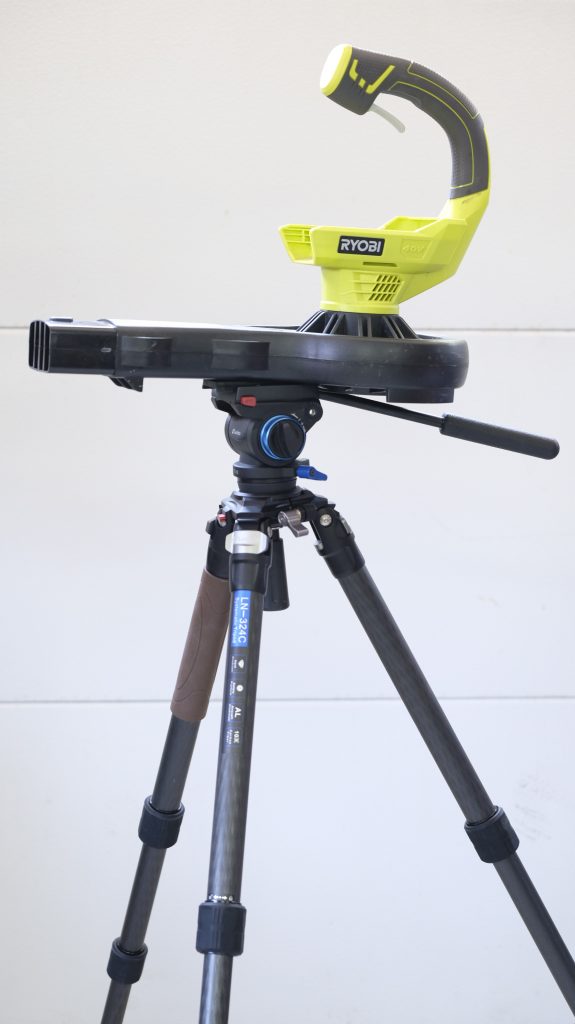 I epoxied a video quick release plate to the bottom of my cheap battery powered leaf blower.  This has allowed me to use the leaf blower like a large video camera.  I placed the leaf blower at a distance from the torque meter such that the anemometer read a wind speed 20 mph.  This is more wind than most people will typically experience while shooting but not entirely uncommon.  I have shot in such conditions, that the previous test of real world wind conditions was conducted with such wind speeds.

The cone of this wind speed is fairly narrow.  It could encompass the camera and a small lens, but for larger telephoto lenses there was a gradient of pressure across the camera.  This is a limitation of using a leaf blower.  Ideally I would have a wind tunnel at my disposal, but this is sadly not the case. 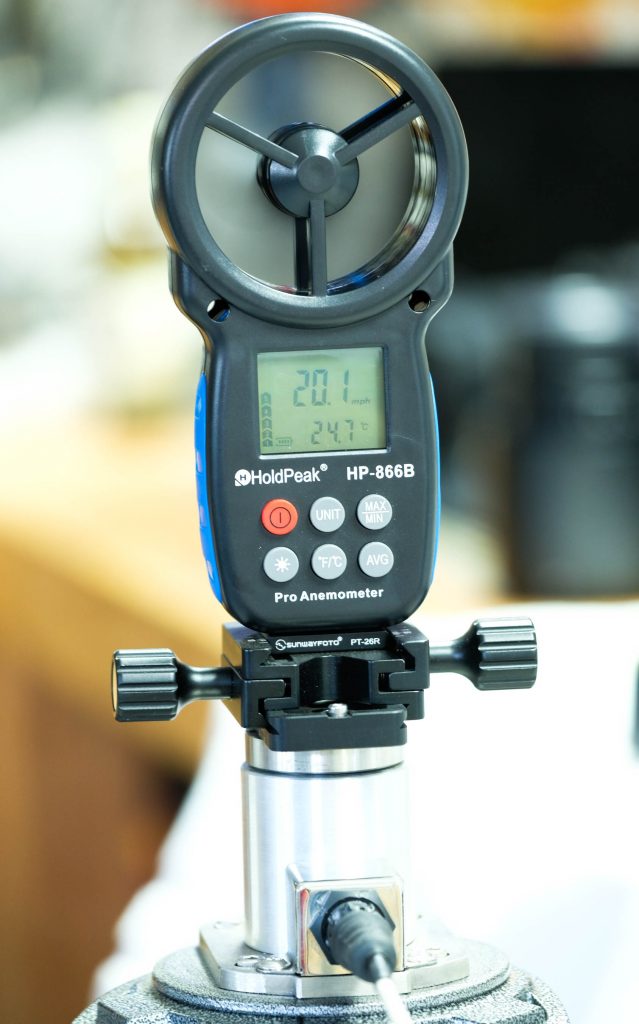 For the first round of testing, I set up the leaf blower pointed directly at the camera and locked it down.  For each lens, I then had the torque meter record for 20 seconds and turned the leaf blower on for two long bursts.   The result of one of these is shown below: 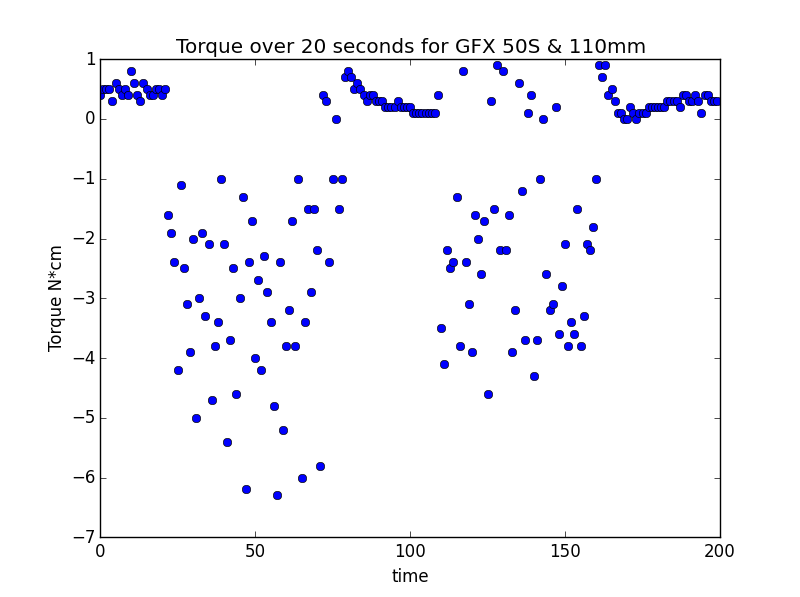 As we saw in the previous wind test, the data is somewhat of a mess.  The two pulses from the leaf blower are clear visible, but instead of getting a nice consistent torque during this time, the data is still very noisy.  The leaf blower does produce some turbulence, but I was hoping that we could get a cleaner data set.  My guess is that this turbulence produces a small vibration.  At the small amounts of torque we are dealing with here, this would cause significant problems for the torque gauge.  There could also be some induced vibrations from vortex shedding, which I estimate would occur at about 10hz for this system.  This is a rabbit hole I will leave unexplored for now.

I pulled out the average maximum torque from each plot, with the results below:

The results are actually fairly close to what we saw before in the real world wind tests.  The far right column shows the necessary amount of yaw stiffness that needs to be present in the camera support in order to keep the image displacement to one pixel under the measured amount of torque.  For the smallest lenses, almost any tripod would be able to hold the camera steady.  For the telephotos, no tripod would.  The telephoto lenses are hit by the double whammy of having both a larger wind profile and more magnification.

The torque meter itself actually displays a far less noisy signal than it records.  When holding the leaf blower still, the torque meter would read a constant torque down to 0.1 N*cm, which is its finest reading.  My best guess is that it is displaying a moving average of the raw sensor readings, which is the right thing to do here.  At any rate, simply reading the torque off of the display proved to be far more controlled and repeatable.

For this next set of data, I placed the camera on the torque meter and then moved the leaf blower around until it was mostly centered on the camera and maximized the reading of the torque meter.  The methodology here still isn’t perfect, but it was far more controllable than before.  There were also some interesting effects with the smaller lenses.  Pointing the leaf blower slightly behind the camera produced a larger torque, indicating there is something more complicated going on with the aerodynamics here than simple drag.  I’m not going to dig into this, because it occurred where we care least.  For the bigger lenses, the simple drag from blowing on the lens did appear to be dominant.

The torques seen here are generally less than the maximum torques recorded in the data set, supporting our theory that some averaging is going on.  The overall message is similar though.  For the smaller, shorter focal length lenses, you don’t need a lot of tripod to hold the camera steady.  For the short telephoto lenses, you need a pretty substantial tripod, and the long telephotos require a near impossibly stiff setup.  This mirrors my personal experience in the field.  I really start to notice the effects of wind once I get into the short telephoto range.

One interesting note from the results above is that the maximum achievable torque on the GF 250mm was not that much larger than on the shorter 110mm and 120mm, despite being a much larger lens.  This is because the 250mm has a lens foot, setting the camera back from the center of rotation and offsetting some of the torque seen from the larger lens sticking out front.  Similarly we see a relatively small amount of torque on the 50-140mm from the same effect.  This raises an interesting question.  Can we get better wind resistance in our setup simply by centering the camera and lens over the apex of the tripod, as opposed to having a large lens sticking out front?  Intuitively the answer should be yes.  However, this may make us more susceptible to shutter shock and the torque from pressing the shutter button, which are minimized by having the camera body over the apex.  These factors are preventable with good technique though.  Wind is not.

So, moving forward we still have some questions: