The winds of spring have finally picked up in my area, finally allowing for the long awaited test.  For my first serious test with the torque gauge, I brought out my largest camera and lens system, the Fuji GFX 50s and lenses.  I have chosen this camera for this test because it is in several ways a worst case scenario.  The camera and lenses are physically large resulting in increased aerodynamic drag.  The camera has 50 megapixels and the lenses are some of the finest I have ever used.  If wind is going to have a detrimental impact on a system, it would be this one. 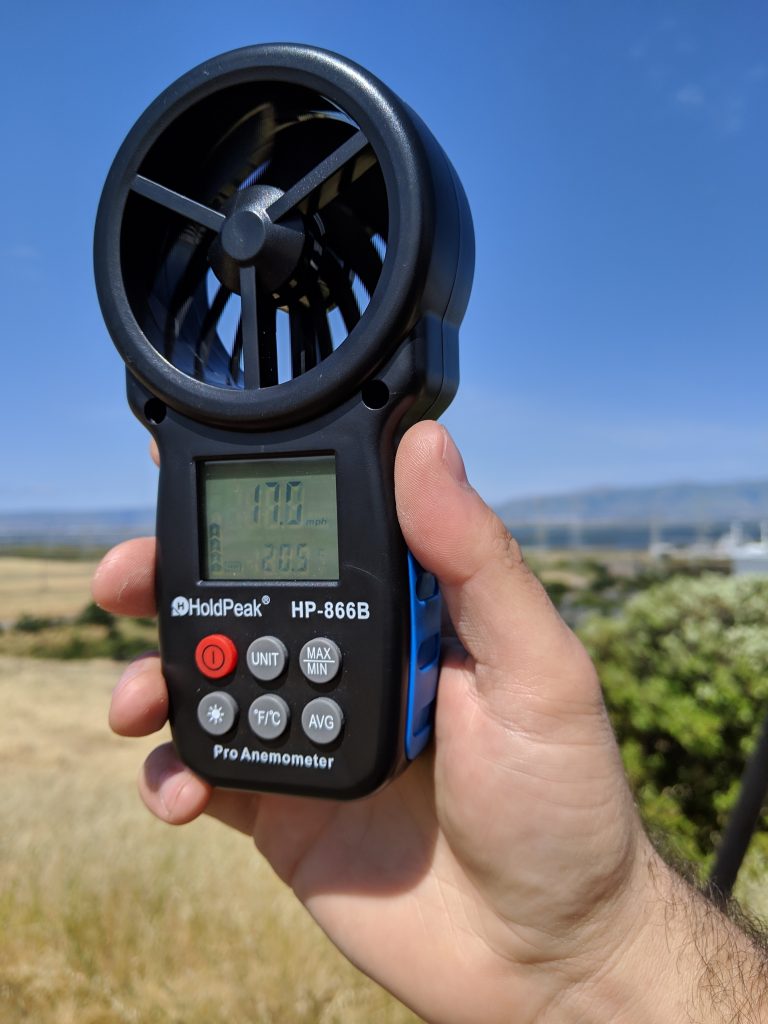 I measured the wind speed this afternoon averaging at 17 mph with gusts up to 20.5 mph using an anemometer.  Most people don’t carry one of these around when shooting.  So, I would describe the conditions as windy.  It is a a bit more than breezy.  It was enough wind to make having a picnic decidedly inconvenient.  It wasn’t so windy to keep the casual recreationist indoors.  Branches aren’t falling off trees, but they are swaying gently with the gusts.

Personally, I have experienced these sorts of conditions many times while shooting.  There is nothing more frustrating that having spent immense amounts of time planning a trip, arriving on location, and then struggling to capture that once in a lifetime image because the camera is moving around in the wind.  This exact scenario was in fact the seed of inspiration for this site.  So, while 20 mph gusts are more than what we would expect in 95% of shooting scenarios, it is important to me that the tripod is still able to deal with it.

The first configuration we are going to look at is the GFX with the 250mm GF.  This is the largest lens natively available for the GF system, and so should be the most susceptible to the wind.  Below is an image of the test setup with the torque meter showing an instantaneous reading of 15.8 Ncm. 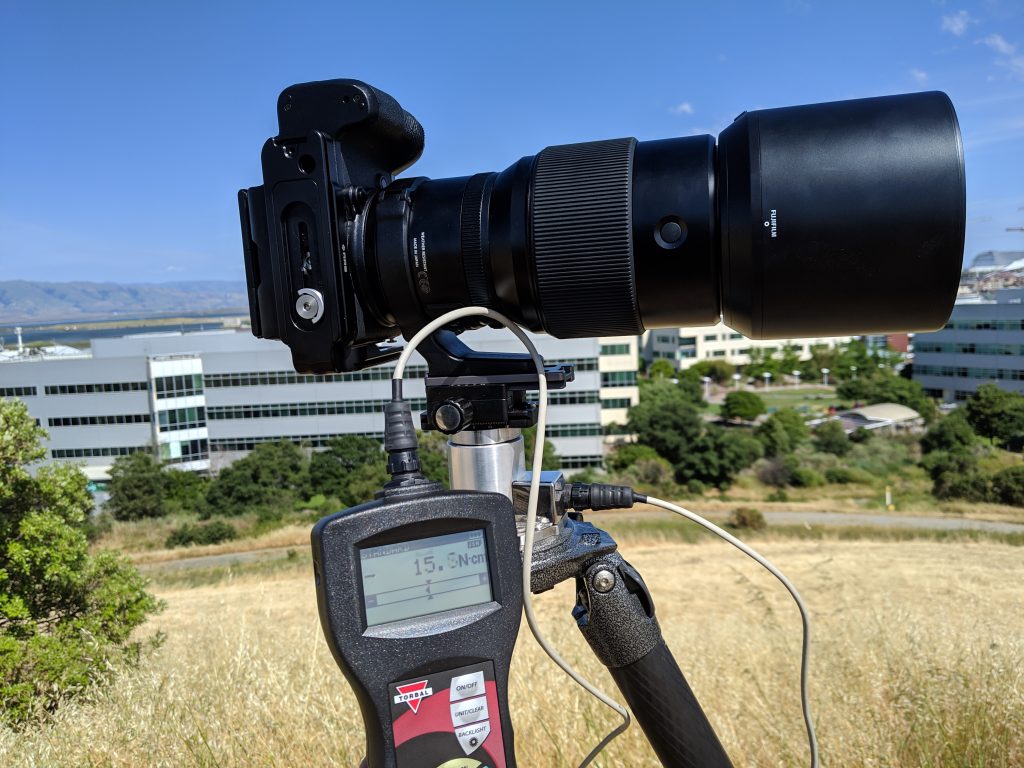 Below is a representative plot of the torque readings over 20 seconds, taken at tenth of a second increments. 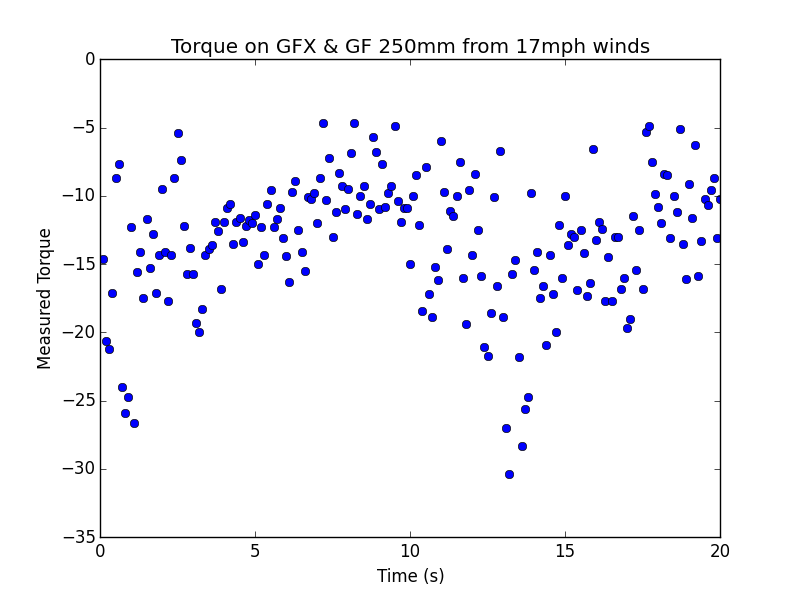 We can see that the average magnitude torque on the system is about 15 N*cm.  The data is pretty noisy and we are seeing fairly high frequency variations in the torque.  Wind pressure doesn’t vary at such a high frequency, and the electronic noise of the torque meter is much lower than what we observe.  So what is going on here?  It was apparent while taking the data that the wind pressure would induce vibrations that would not die down quickly.  And since they were being continuously driven, there were continuous small vibrations causing the high frequency variations in torque seen.   Using the previously calculated formula

is the focal length of the lens, and

is the pixel width.  So,

is the amount of yaw stiffness required in the system to keep the camera and lens steady enough on average in these conditions for longer exposures.  For very long exposures, we would actually care more about the peak torque as opposed to the average.  The peak magnitude of the torque is about 30 N*cm, so we would need double the stiffness calculated above.  This brings us to the elephant in the room.  No tripod I have tested is capable of achieving the 7000 Nm/rad yaw stiffness required here, much less that for peak torque.  When handling this camera and lens with my most stable tripod, it is immediately apparent that the tripod is not the limiting factor in stability.  Its the lens foot.  The narrow piece of metal connecting the lens to the tripod, in addition to the ring itself have nowhere near the stiffness of the tripod and head.  So, short of machining a new, more stable mounting system for the lens, we are never going to be able to get sharp long exposures with a telephoto lens in windy conditions.  Further research will be required to determine exactly how long of exposures we can achieve, and how much image stabilization helps us.

Next lets look at the GFX with the GF 110mm attached.  While the 110 is a decently large lens, and the GFX is no compact camera either, these are decently representative of a full frame DSLR with a 24-70 F/2.8 zoom. 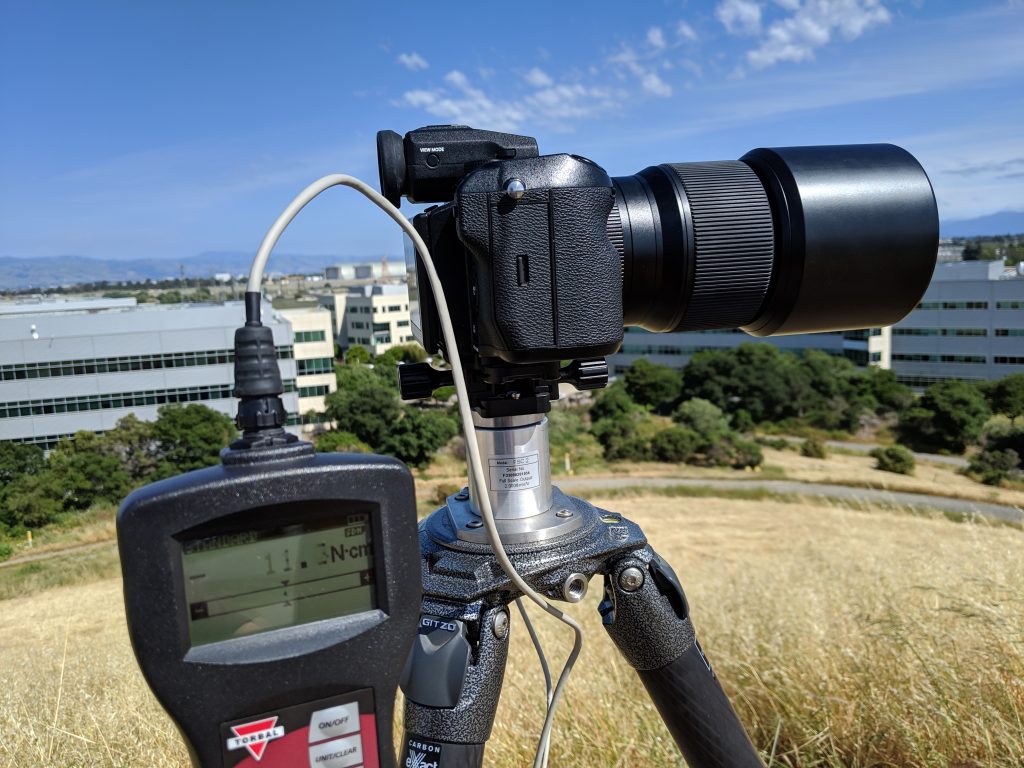 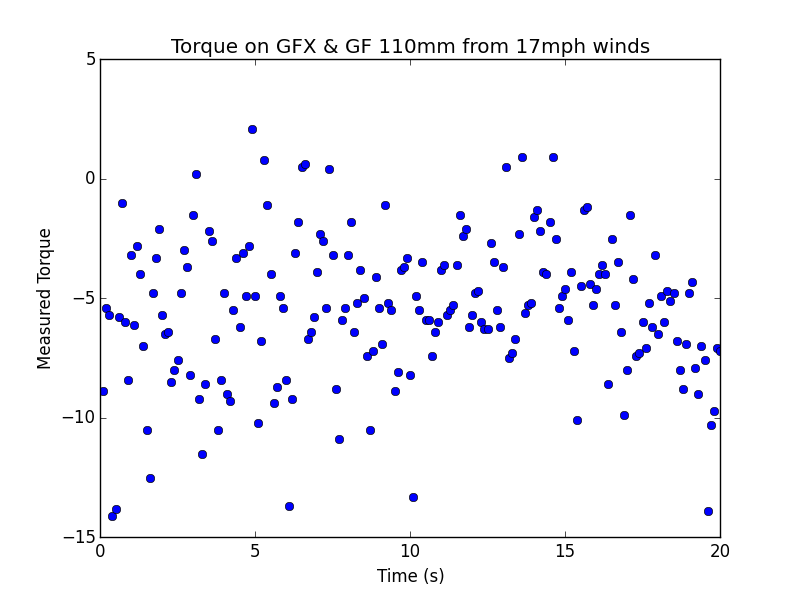 Here we are seeing an average torque around 5 Ncm with a peak at 14 Ncm.  The data exhibits the same noise as before, which I still attribute to undamped vibrations of the camera.  Using the average, we come up with a necessary yaw tripod stiffness of

This is entirely reasonable and perfectly achievable with good all purpose and systematic tripods.  We should expect even the best travel tripods to struggle here though.

Finally, I tested the GFX with the GF 45mm.  This is a much more compact lens than the previous two and is somewhat representative of your typical full frame prime lens. 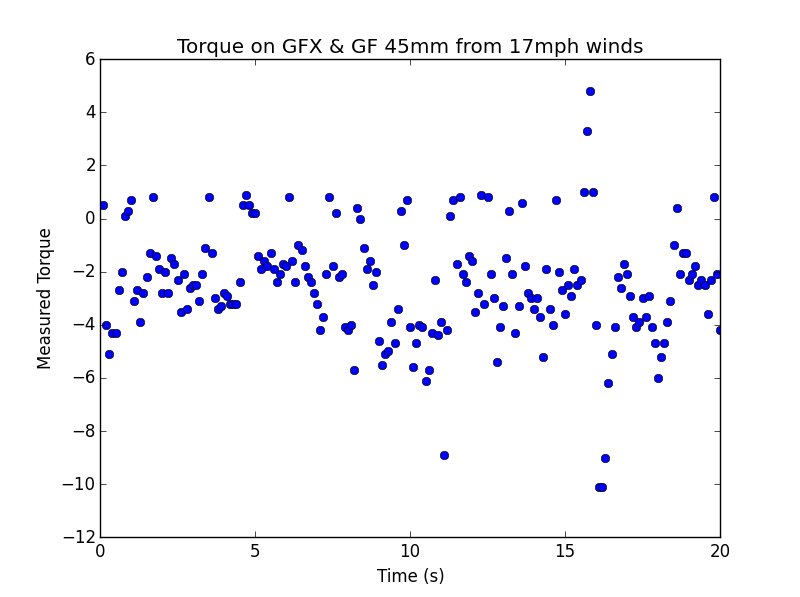 Again we see a pretty noisy data set and the odd bug with the torque meter where it refuses to record a reading between -1.0 and 0.0 Ncm.  In the future, I will have to try to make the torque meter record mostly positive readings to avoid this.  Lets call the average torque something like -2 N*cm.  That means that the yaw stiffness required is

This is very reasonable, and most tripods should be capable of providing 170 Nm of yaw stiffness without issue.  Our approximations are a little bit more egregious here, since we see significantly higher peak torques.  This suggests that for true long exposures, a much stiffer tripod would be appropriate.  But for general use, small light will likely be adequate given proper technique.

We can see from these examples that the necessary stiffness of the tripod is much more dependent on focal length than anything else.  Longer focal length lenses not only magnify vibrations and thus need to be kept more still, but they are larger causing much larger forces to be exerted upon them by the wind.  Unfortunately it doesn’t appear possible with present commercial equipment to do long exposures with telephoto lenses in windy environments.  Fortunately though, this is not something people commonly ask of their equipment.  The interesting bit going forward is to see exactly how much tripod is necessary for medium focal length lenses.

Most of this post has been highly theoretical and somewhat speculative.  In the next post I will compare images taken in these same conditions on several different tripods to see how well the calculations made here hold up in the real world.