The primary measure of tripod stability used on this site is stiffness, defined precisely as the amount of torque required to to achieve a particular angular deflection.  While we have very accurate measurements of the torsional stiffness of tripods, we don’t have good data on amount of torque that ends up getting exerted onto the tripod in real life photography situations.  As described in detail in a previous post, knowing this torque is critical towards understanding how stiff of a tripod is necessary.  Clearly everyone doesn’t need or want to use the largest, stiffest, tripod available.  On the other hand, most photographers have experienced the frustration of using a tripod not stiff enough for the conditions.  For a long while, I pondered the right way to measure the torque exhibited on a tripod.  After several failed attempts, I realized that torque gauges are commercially available and would provide much better data than anything I could manage to kludge together.

While kicking myself for not thinking of this sooner, I ordered a Torbal FSC2 torque gauge.  This is originally designed for calibrating tools, but I realized it would make the ideal field portable measurement tool.  I mounted the gauge to the top of a spare Gitzo 5 series top plate and then added an arca clamp to the top of the gauge.  This allows me to measure the amount of torque about the yaw axis between the camera and the tripod.  This is ideal for measuring torques originating solely on the camera such as shutter shock or the physical act of the hand pressing the shutter button.  It is less ideal for measuring torques that act on the tripod as well, such as wind, but it will still be useful.  The image below shows the torque gauge on the Gitzo GT5533LS with a Fuji GFX and 110mm lens. 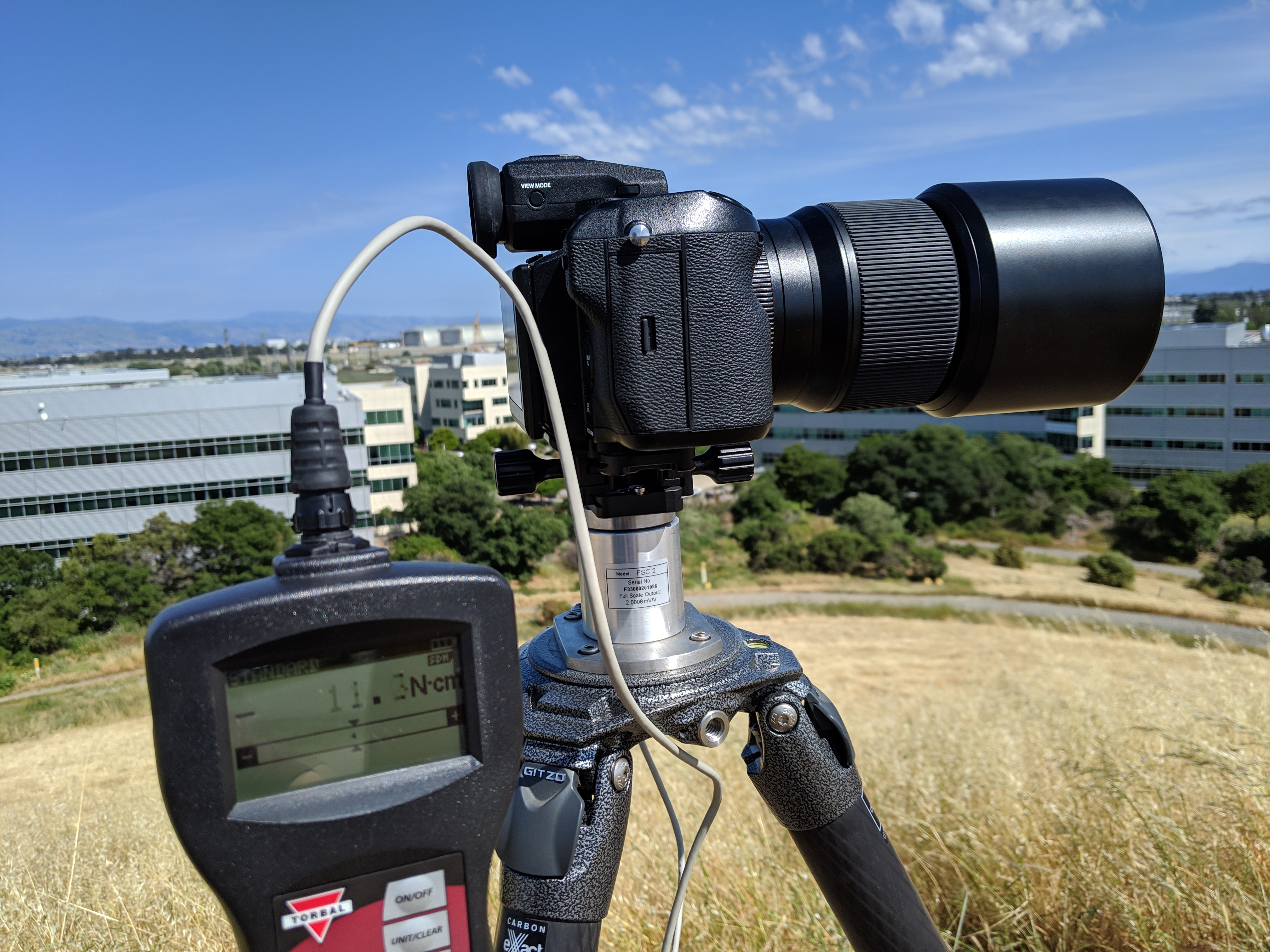 There is a breeze coming from behind the camera that took the photo, or the the right of the GFX in the image.  Because the lens extends significantly out from the center of rotation, the aerodynamic drag from the breeze causes a counterclockwise torque on the camera and tripod.  As can be seen on the screen, that torque is 11.3 N*cm.  Previously we calculated that the amount of stiffness necessary to keep an image sharp to the pixel level is given by:

is the focal length of the lens, and

is the pixel width.  So,

So, we want a tripod with yaw stiffness of at least 2345 Nm/rad to achieve sharp images under these conditions.  That is a pretty high bar.  Only a couple of tripods that I have tested are capable of such stiffness, and that doesn’t even include the loss of stiffness from whatever head is attached.  This is a preliminary result and applies to long exposures where the wind would be varying enough to move the camera around.  If the torque were a constant 11.3 N*cm, the camera would be still regardless of the tripod used.  Wind is highly variable, so clearly it is not constant and the camera will be pushed around.  On the other hand, if the shutter speed is fast enough it doesn’t matter if camera is moving around a little bit.  At some point, the shutter speed is fast enough that a tripod isn’t necessary.  There are many open ended questions here.  How much stiffness is necessary at medium shutter speeds?  To what extent does damping play a role when the stiffness of the stiffness alone isn’t enough to hold the camera steady?  How much do image stabilization systems help?  I’m sure we will come up with more as testing progresses.

Lets take a look at another example of data from the torque gauge.  Below is a plot of the measured torque on the tripod for three shutter actuations of a Fuji GFX 50S.  The camera is mounted on the 250mm GF lens in portrait orientation, which is in turn mounted to the torque gauge via a lens foot.  The advantage of this configuration is that it places the shutter out from the center of rotation, amplifying the effect of the motion, and that the shutter moves horizontally in the yaw direction. 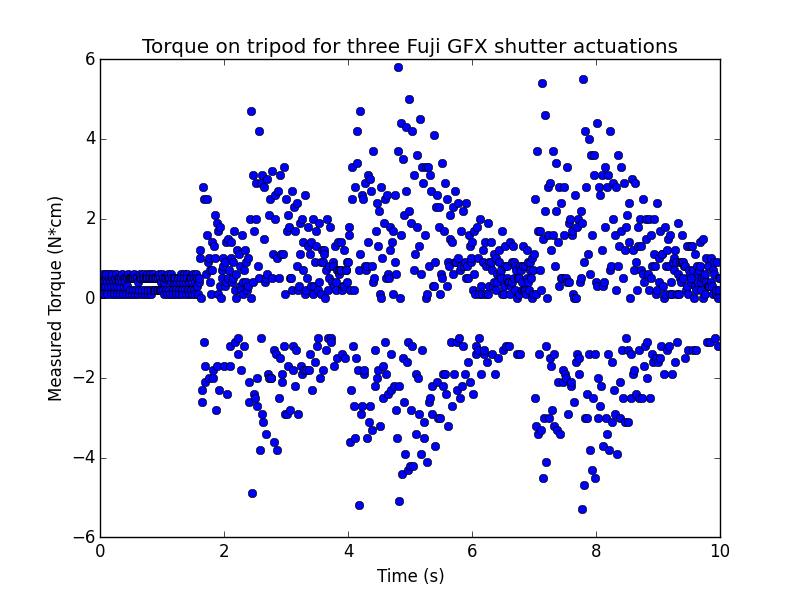 We see two spikes at each shutter actuation, one for the front curtain and the other for the rear curtain.  There is a gap between 0 and -1.0 N.cm which must be an artifact of the torque gauge.  Not sure why it is there, but it is definitely not real.  As far as the real We are reading maximum torques right around 6 N*cm, but for a very brief time.  We are not going to repeat the analysis above because that is dependent on the applicable torque being applied for a long time compared to the resonance frequency of the camera – tripod system.  That is clearly not the case here as the shutter shock is a transient impulse.

Properly analyzing a transient impulse will require going to the full ordinary differential equation and treating the torque as a driving force.  To get meaningful results here, we also would likely need less noisy data to work with.  While the torque meter is likely going to be useful for wind, it probably won’t be useful for shutter shock.  The good news is that there is no reason not to just use electronic first curtain shutter when shooting off of a tripod.

Moving forward, I am hoping that the torque gauge will be an invaluable tool to help determine that lingering question of, “how stiff of a tripod is necessary?”  I can already tell that there is not simple answer here.  It will depend on conditions, technique, and what gear you are trying to stabilize.  Hopefully we will be able to come up with a reasonable and useful set of guidelines.