Shutter shock is an issue that has plagued early models of mirrorless cameras.  Unlike in a DSLRs, the shutter must wind to cover the sensor very quickly, then release.  This additional movement causes mirrorless cameras to be more susceptible to the shutter action.  DSLR cameras are not immune, and have their own host of problems in the form of mirror slap, but it was in mirrorless that this issue came to the forefront.  This site’s interest in shutter shock should be clear.  To what extent can a tripod minimize the effects of shutter shock?  In order to test this I am going to use a modified version of the MTF testing I described previously.

Previously I used a backlit razor blade as an edge to test sharpness.  The razor blade is an excellent high contrast, high resolution target, but the images are time consuming to post process through MTFmapper’s single ROI function.  Now, I am going to use one of the tilted square targets that MTFmapper automatically identifies.  This has two advantages.  First, I don’t have to crop the images before feeding them into MTFmapper.  Second, the tilted square gives me measurements of both the horizontal and vertical movement of the camera.  The test target is shown below. 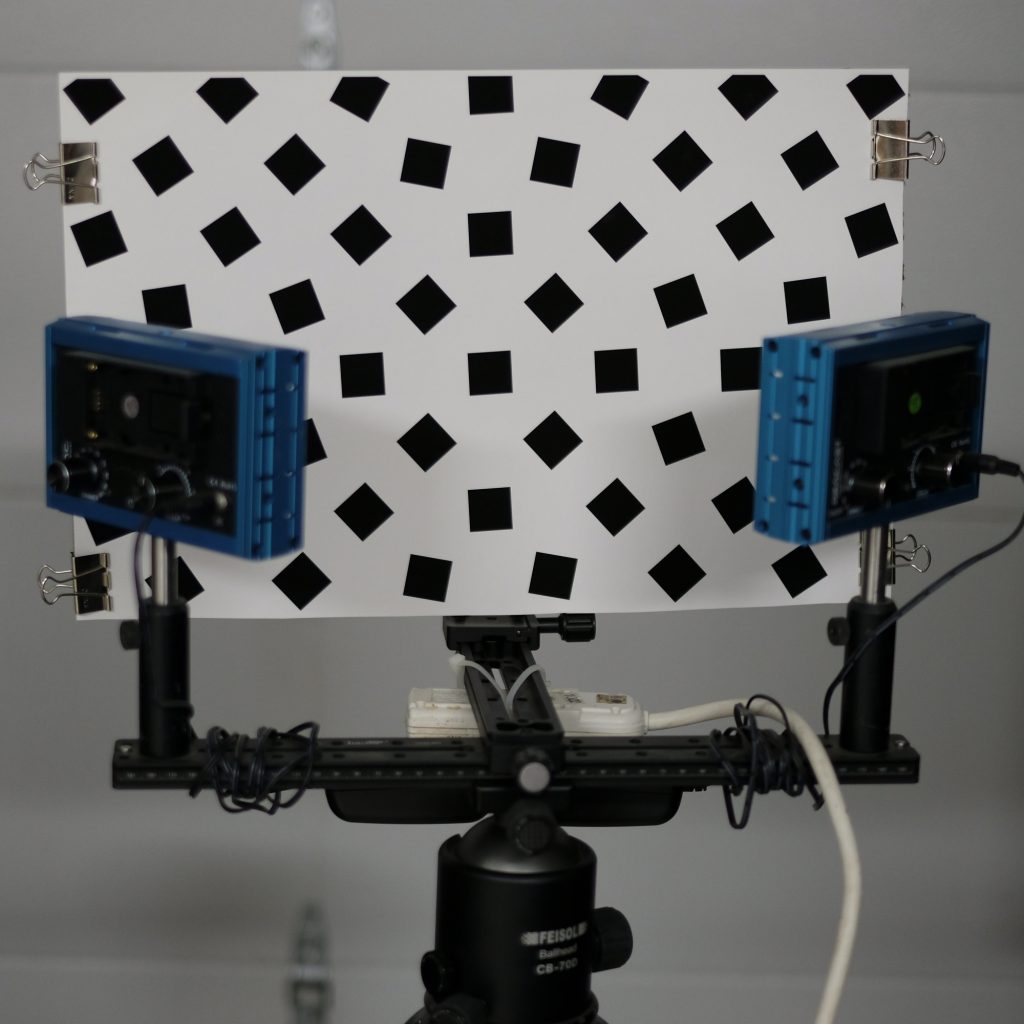 I am still illuminating it by a pair of adjustable color temperature LED lights.  The camera setup is shown below: 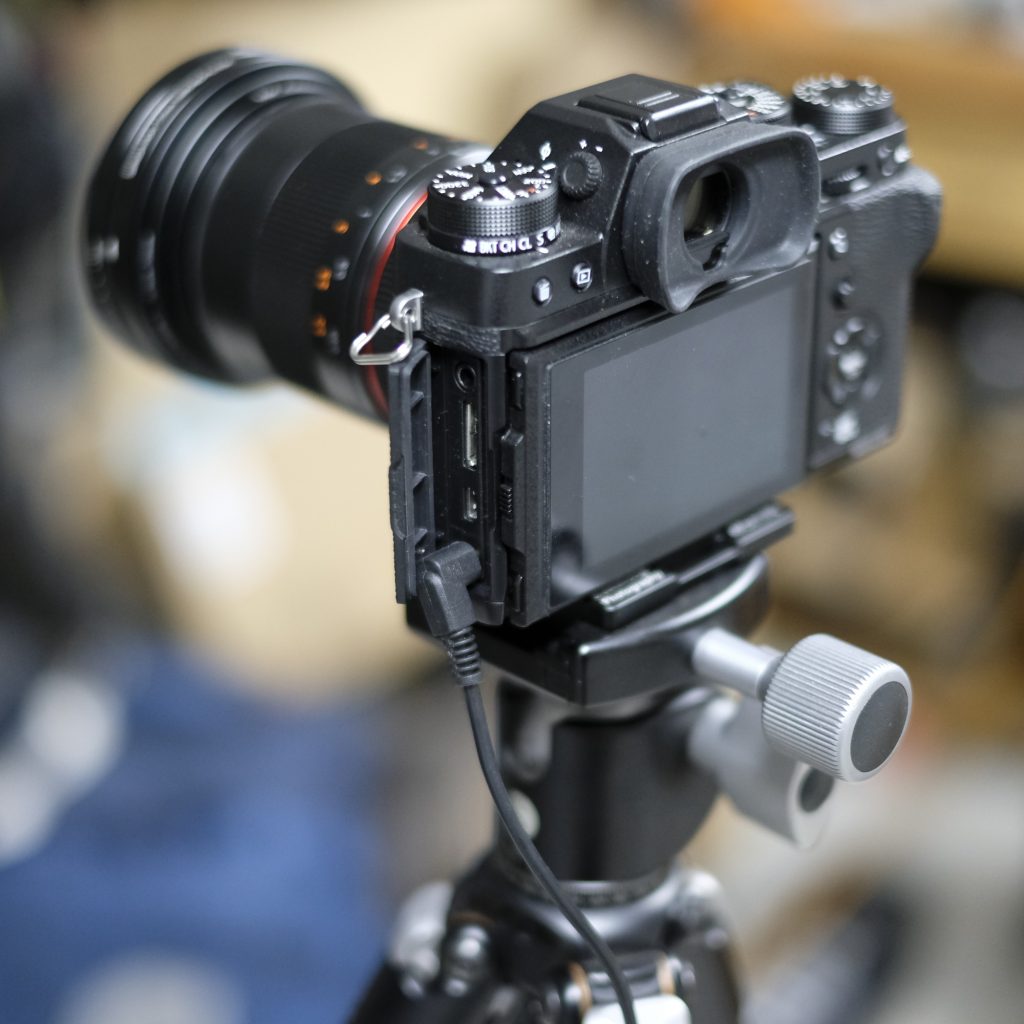 The camera has a Singh-Ray 77mm Variable ND filter attached to the lens.  In this particular case, I am using a Fuji X-T2 with a Rokinon 85mm 1.8 manual focus lens.  This isn’t the ideal camera for testing shutter shock, but it is the one I have on hand to begin with.  I am using a RRS TFC-14 tripod with the BH-30 head.  This is middle of the range in terms of stiffness.

The procedure for testing the shutter shock is as follows.  Focus the lens to the target wide open, then stop down to f/4.  Maximum light on the target.  ISO 400, Raw.  Set the desired shutter speed on the camera.  Adjust the variable ND filter to the point that correct exposure is achieved.  I started at 1/500s and worked down to 1s in 1/3 stop increments.  Import images to Lightroom and export to tiff with default settings.  Open images in MTFmapper to analyze edge acuity. 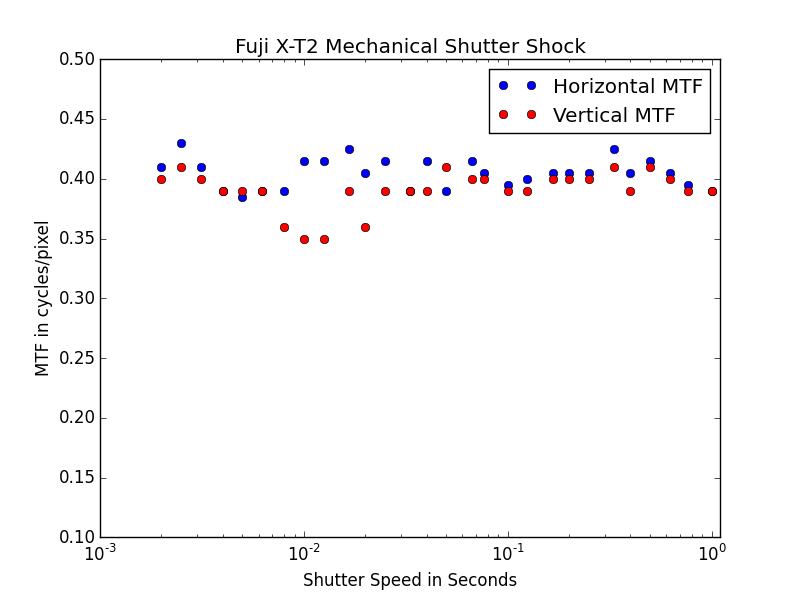 There is a very small effect of shutter shock right around 1/100 s shutter speed, and only in the vertical direction.  The effect is so small that it would never be noticeable in every day images.  It isn’t even noticeable when visually inspecting the test images.  Despite being small, it is measurable.  This is shown by comparing the vertical MTF for the mechanical shutter to the electronic shutter, as shown below: 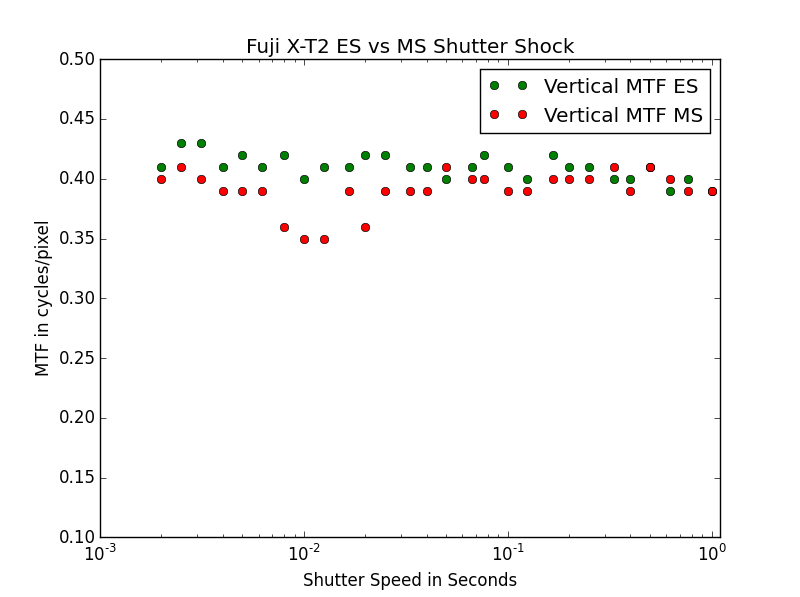 The mechanical shutter is consistently slightly worse than the electronic shutter, and particularly so right around 1/100s.

To complete this test, I repeated it with the camera in portrait mode.  The system should be more susceptible to shutter shock in this configuration, as the shutter motion is no longer pushing straight up and down on the tripod apex.  In portrait mode, the motion of the shutter will cause a torque about the tripod apex in a motion corresponding to the pitch stiffness of the tripod.  I have set up portrait mode by rotating the ball head into the side pocket, as shown below.  Alternatively, I could use an L bracket to set up portrait orientation.  I will try that in a later post.

The results are below.  This time, I have just plotted both the MS and ES results on the same graph, as there is enough separation to be readable. 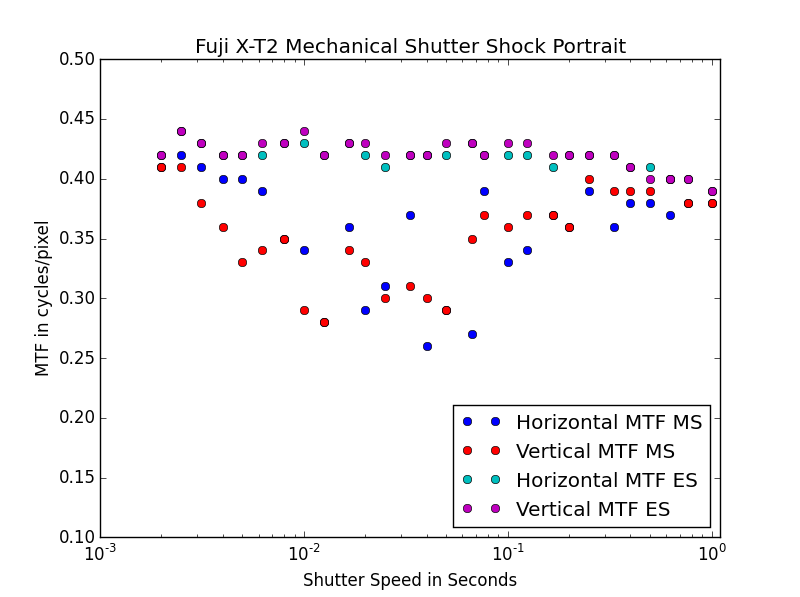 The effect of the shutter shock is much greater when the camera is mounted in portrait orientation as expected.  Again we see near perfect results from the ES.  The MS deteriorates the results, but again not in a way that the average user would likely notice.  For example, here is the raw 100% output from MTFmapper of a mechanical shutter shot at 1/500s: 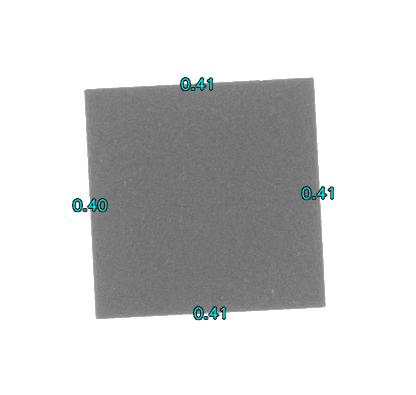 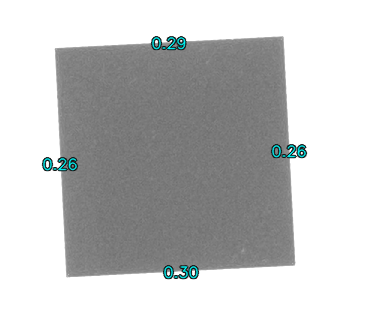 The effect is hardly visible to the naked eye.  Importantly though, this proves that this method is quite sensitive.  We should be able to measure very small deteriorations in image quality.

The Fuji X-T2 when mounted directly to the tripod is clearly susceptible to a small amount of shutter shock, but not in a manner that would be particularly noticeable in everyday images.  However, when in doubt, just use the electronic shutter.  There is no downside at the shutter speeds where the system can detrimentally affected by the mechanical shutter.  There are still a lot of questions that I have left to answer: