In a previous post, we saw that we can combine the stiffness of the tripod legs and stiffness of the head as we would springs in series to get the combined stiffness of the entire system.  This gives us the tool set to answer the more natural question of “What ball head should I choose for my tripod?”  Part I of this series looked at the correlation between the stiffness of a ball head and its weight, finding a strong linear relationship among the best performing heads.  In this post we are going to be picking some specific tripods and looking at the total system stiffness/weight performance when paired with all of the tested ball heads.

Before diving in, we need to be clear about exactly what we are optimizing.  In engineering, this is called choosing a ‘figure of merit’ (FOM).  I propose that we want to maximize:

is the total system stiffness and

is the total system weight.  This is the same FOM as used for the head rankings page, but doesn’t factor in height as the tripod score metric does.  This is because there is very little variation in head height compared tripod leg height.  We are thus implicitly making the approximation that all heads are the same height, at least when compared to the tripod legs.  As implied by the title, we are optimizing the choice of ball head, not the tripod.  The assumption here is that you have a set of legs in mind for which you are trying to choose a head, and thus the height of the total system is effectively already set.  The weight and stiffness are the remaining degrees of freedom.

To calculate the stiffness of the tripod + head system, I am simply adding their stiffness’ as one does springs in series.  This was shown to work well in a previous post, outlining the technique.  I am then taking the harmonic mean of the total system pitch and yaw stiffness’ to get an overall average stiffness metric, which is then simply divided by the combined weight of the tripod and head.  For a given tripod, I calculate this FOM for each ball head that I have tested.  The optimal ball head is then simply the one with the maximum value for the FOM.

Now, I could simply give a sorted table showing the FOM with each head, but tables are boring and hard to read.  Instead, I plot the FOM for each head versus the weight of that head.  We should then be able to see in a nice visual way that smaller, weaker tripods only need a small, lightweight head while heavy, stiff tripods benefit from a stiffer head despite the added weight that such a head incurs.  This is a bit awkward, as I could have alternatively plotted against the stiffness of the head.  There isn’t a strong justification for choosing one over the other in this case.  However, as shown in the previous post, the stiffness and weight for the best heads are approximately proportional, so it matters very little which I choose.

Let’s finally look at some results!

My canonical guinea pig tripod, the TFC-14 is relatively strong for its weight, so we should thus expect it to be somewhat sensitive to both the weight and stiffness of the head. 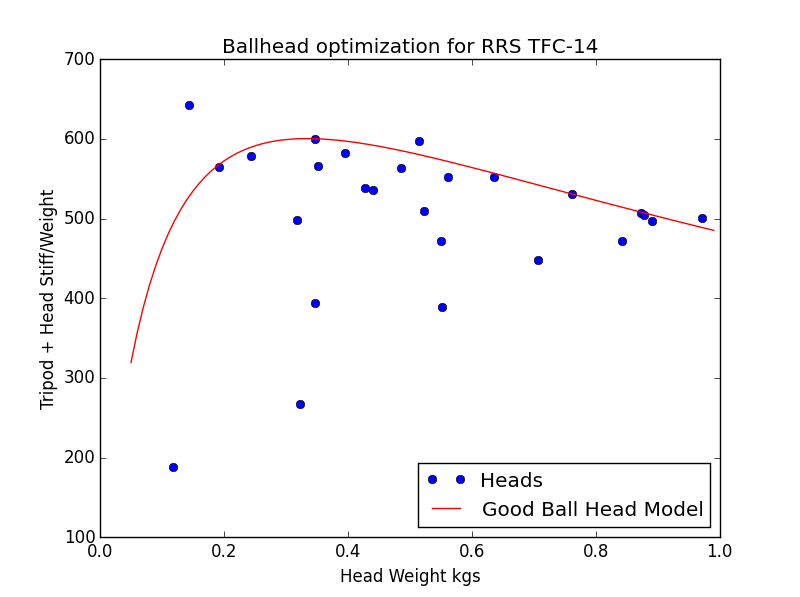 Again, the blue dots represent each ball head that I have tested.  The higher up on the chart, the better the combined stiffness / weight performance of the head – tripod system.  The red line represents the “good ball head” model described above.  The results are precisely what we should expect.  A weak head will compromise the stiffness of the system.  At some point though, there are marginal gains from to be had from increasingly stiffer heads, and those heads just add weight.  Intuitively, this makes sense.  There is no point in putting a massive head on a small set of legs.

There are three heads that lie above the red curve.  These are the same as we saw in the previous post, from left to right on the chart, the RRS BH-25, Sirui K-30X, and Feisol CB-70D.  While the BH-25 is the optimal head (of those that I have tested) for the TFC-14 legs from a stiffness/weight point of view, this analysis leaves out a lot of information.  This is not a review or endorsement of the BH-25.  The head is tiny, has no panning lock or tension control, and awkward ergonomics.  The head that I use with these legs is the Sirui K-10X, which is the head lying on the red curve at the maximum.  But again, I’m not trying to make specific recommendations in this post, just observe some trends.

In a similar vein, the TVC-23 is also very stiff for its weight, but a significantly stiffer, larger tripod than the TFC-14. 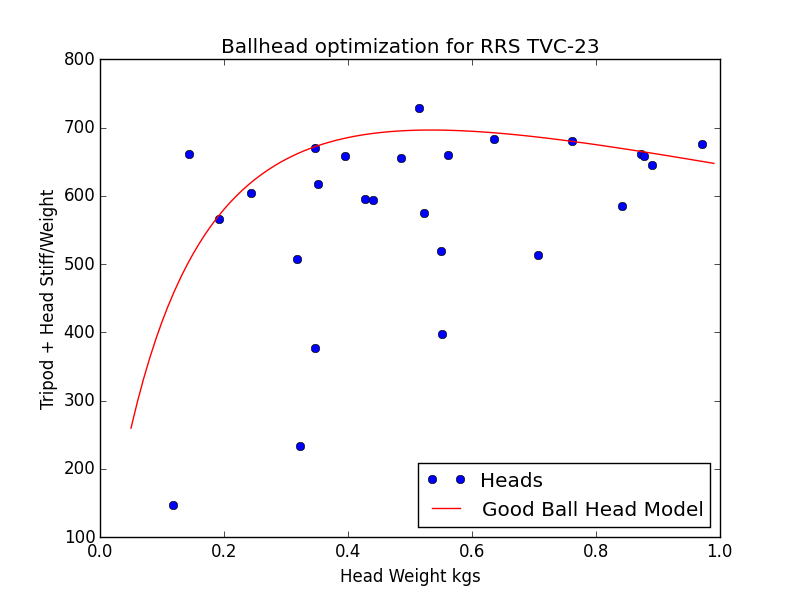 The story here is similar, but we now see that the tripod is less sensitive to the head’s weight, and more sensitive to its stiffness.  There is no clearly optimal range for the head choice.  It is still important to choose a good head, but one might choose a lighter one if the intended use is travel, or a heavier stiffer on for the studio. 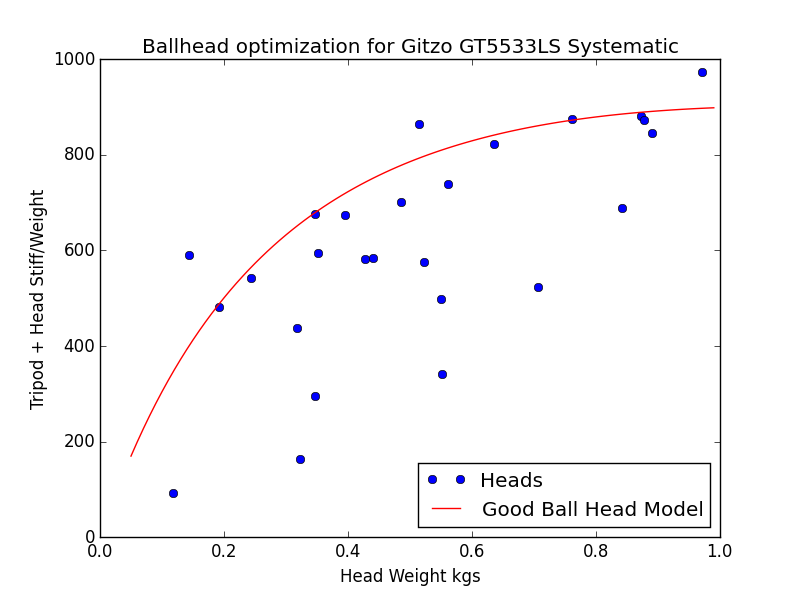 This set of legs does indeed benefit from the stiffest available heads.  The legs are heavy enough to begin with that the added weight from such heads isn’t an issue.

Now for a relatively light and weak tripod 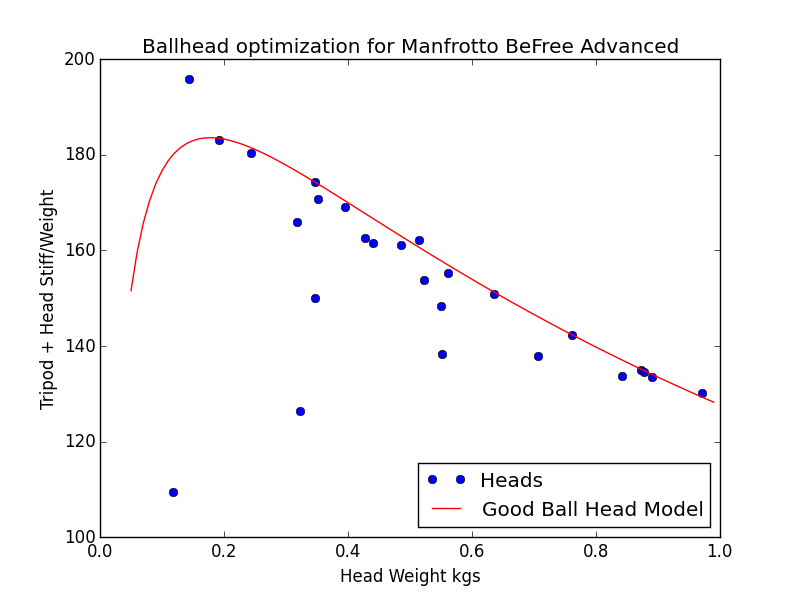 The effect here is a little more dramatic.  The weakness of the legs means that it is pretty pointless to pair them with all but the lightest heads.  This is the trend I have seen with all of the weaker tripods.  Don’t bother with big stiff head.

Most other tripods fall into the general categories seen above.  For a lot of the legs in the mid stiffness range, the plot looks pretty similar to that of the TVC-23, or pretty flat for most heads with good underlying stiffness to weight ratios.  For the weaker tripods, don’t bother pairing them with a big stiff head.  For the sturdiest tripods, get a big stiff head to get the most out of your legs.

I think I will start adding this analysis to tripod reviews and build out a recommended heads page for each tripod.  This will clearly evolve as more heads get tested, but the already tested heads represent a decent starting point.