This is the first in a series of posts looking to answer the question “Given a set of tripod legs, what is the optimal ball head to pair with those legs?”  The previous post on the combined stiffness of a complete leg + head setup gave us the tools to begin to answer this question.  Our metric going forward will be to optimize the total stiffness / weight of the legs + head.  Our ultimate goal will be a heuristic for choosing a ball head such as “Choose a ball head with stiffness of at least three times that of the legs.”  It remains to be seen if such a simple guideline will be possible.

The only thing we are going to do in this first post is look at the general trends of stiffness vs weight of ball heads.  This will become important later on.  For now though we are just exploring the limits of what kind of performance we can expect on a weight adjusted basis.  Diving right in, here is the yaw and pitch stiffness of every ball head I have tested against its weight: 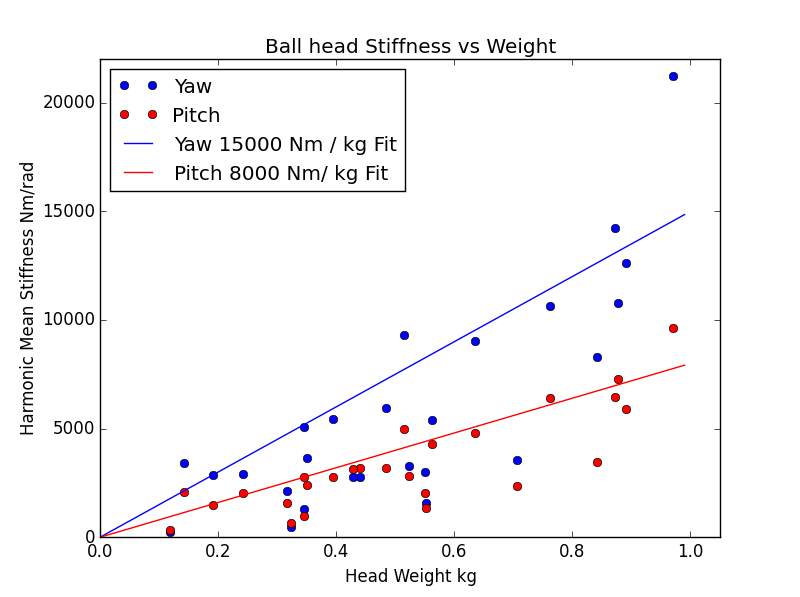 The farther up and to the left (stiffer and lighter respectively), the better the performance.  Immediately obvious is that the pitch stiffness of most heads is worse than the yaw stiffness.  I’m not exactly sure why this is, but I suspect that it has to do with the stem between the ball and the quick release clamp.  There is significant asymmetry here in the way that the stem bends under load.  Yaw motions are torsional, while pitch deflections are of a beam deflection type.  Tripods tend to be the opposite, with the pitch motions being stiffer than yaw.

The other apparent feature is that there is a strong linear relationship between the weight and the stiffness.  There is no reason this should necessarily be the case, but this could be a useful feature to take advantage of in our future analysis.  I have drawn two lines on the plot, roughly through the best performing heads.  In yaw, the best performers seem to have stiffness around 15,000 Nm/rad per kg, and in pitch, that stiffness is around 8,000 Nm/rad per kg.

Note that a head that performs well in yaw stiffness, also tends to perform well in pitch stiffness and vice versa.  So it doesn’t appear that there is a trade off between the two.  There are three heads that stand out as particularly high performers.  These are the RRS BH-25 on the light end, the Sirui K-30X in the middle, and the Feisol CB-70D on the high end.  We will continue to see these heads pop up throughout this series of posts.

A plot of the mean stiffness vs weight tells a similar story as above: 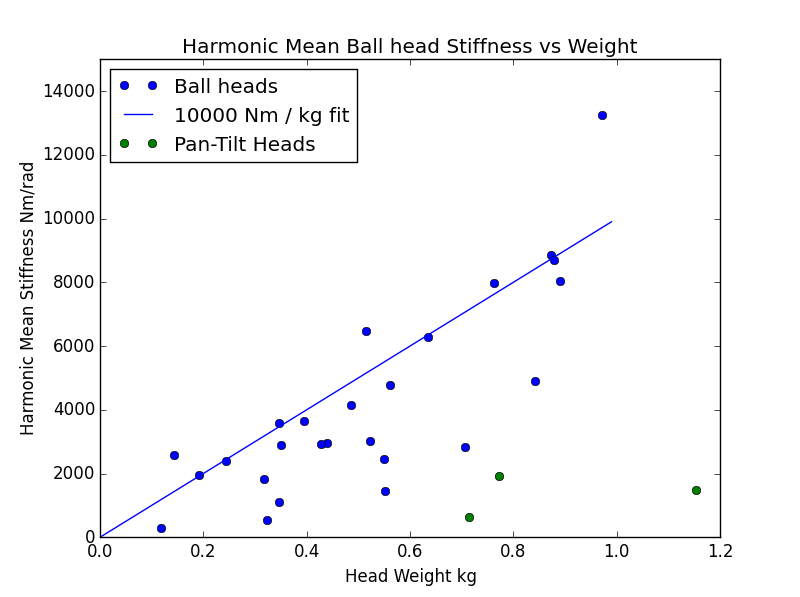 Again we see those three outstanding heads well above the general trend.  I have also plotted the three pan-tilt type heads that I have tested in green.  The performance is very poor compared to every ball head.  There are very good reasons to use pan-tilt heads, but optimizing your stiffness/weight isn’t one of them.  That is why I am only including ball heads in this exploration.

Finally, while we are here, we can also plot the stiffness vs. the diameter of the ball as opposed to weight: 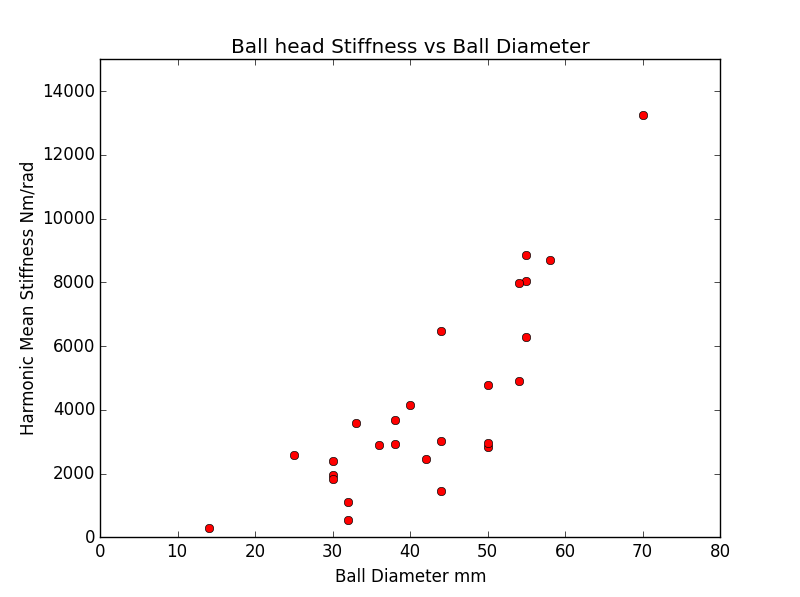 This is the harmonic mean of the pitch and yaw stiffness’.  We can see again, to no surprise, that there is a strong relationship between the stiffness and the size of the ball.  Bigger is better.  We see fewer high performing outliers as before as all the top performing heads lie along a fairly consistent line.  This indicates that they key to outstanding performance from a stiffness/weight perspective is packing a big ball into a compact and lightweight package.  The RRS BH-25 is the epitome of this philosophy.  The head has no tension control or separate panning lock, reducing the overall weight.

We have seen that for the best ball heads, the stiffness of the head is roughly proportional to its weight.  Weight isn’t what gives the head stiffness, as we have seen plenty of heavy and not stiff heads, but there seems to be a practical upper limit to the achievable stiffness.  This trend is going to be a useful reference point going forward for both calculating and making sense of the optimization results.