In testing tripods, I have noticed some patterns in their performance with respect to design.  Some of these are obvious, such as tripods with skinny legs tend to perform worse than those with fat ones.  Less obvious is the tripod performance with respect to the angle with which the legs splay outwards.  It seems that tripods with legs that splay outwards more have better yaw (axial or pan) stiffness and thus better overall performance than their narrower counterparts.  In this post we are going to explore that assertion more thoroughly.

From the perspective of the manufacturer, it is certainly appealing to err on the side of narrower leg angle.  The tripod will be lighter and/or taller than if the leg splay were wider, padding the spec sheet.  In addition, the overall material cost will be a little bit lower.  There are strong use reasons not to want the leg angle to wide as well.  Too wide of a stance becomes cumbersome and unwieldy.  If used in a populated area, the tripod becomes that much more prone to blocking pathways and getting in the way of the photographer.  A wider stance tripod is much less prone to tipping over though, and as we shall see, also produces better overall stiffness.

Lets take an overview of the anecdotal evidence referenced above.  Below is the ratio of the pitch versus yaw stiffness of each tripod I have tested versus its opening leg angle. 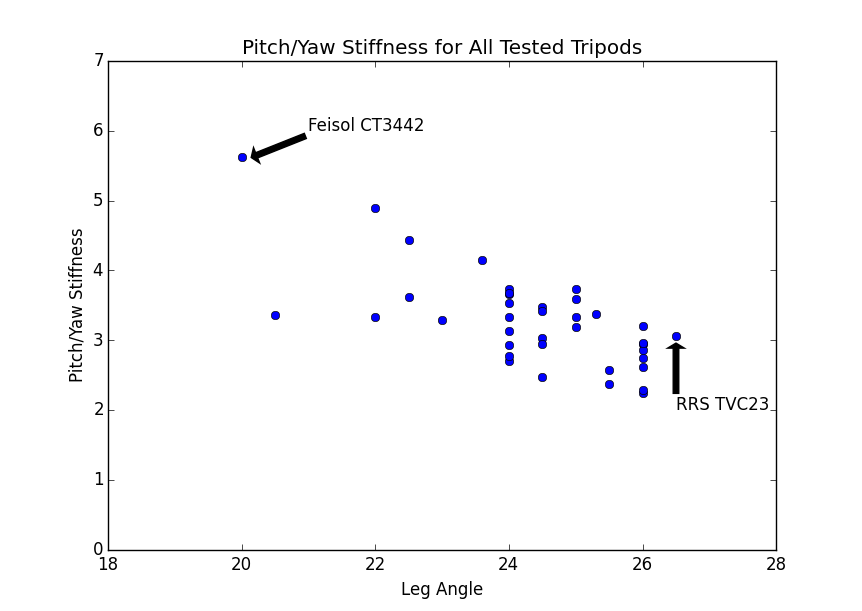 There is a clear upward downward trend as the leg angle opens up.  This plot is showing us that there is clearly an effect on the stiffness due to leg angle, but doesn’t say anything about the overall performance of the tripods in question.  Clearly though tripods with a wider stance have much better yaw stiffness with respect to their pitch stiffness.  On the extremes we have the Feisol CT3442 Tournament and the Really Right Stuff TVC23.  The RRS is an outstanding performer, while the Feisol is merely okay.  There are a lot of good and bad tripods in between.

To better understand the effect leg angle has on performance, we need to test a single tripod at a variety of different leg angles.  The tripod I have chosen for this test is the RRS TVC23 because it has the widest native spread.  Thus, by inserting shims between the pull tabs and the apex, I can methodically decrease the leg angle.  The shim is simply aluminum foil.  This is ideal for being thin and allowing for small angle changes and also for maintaining full metal to metal contact between the leg and the apex. 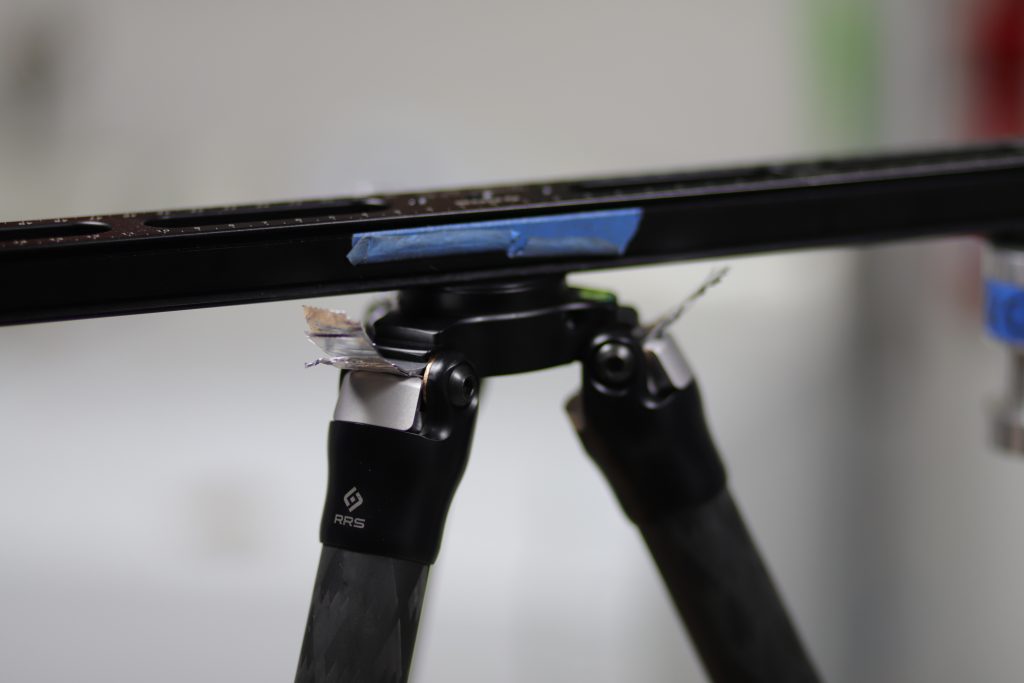 The bar shown on top is simply the standard test apparatus.  After inserting the foil, the angle of each each leg was measured.  The results were averaged and that is the reported value for the leg angle.  I took three measurements at each leg angle and each one is plotted on the charts below.  First, lets take a look at the Yaw Stiffness: 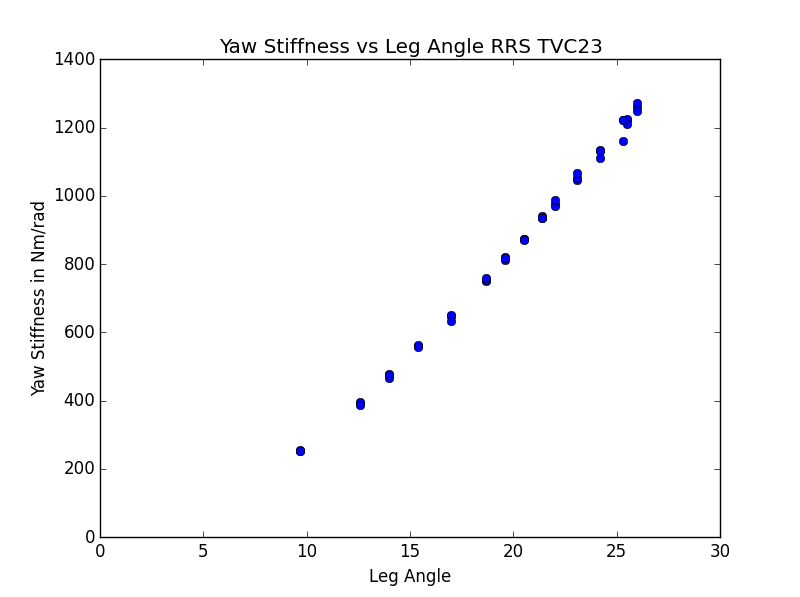 That is a beautiful set of data.  All of our suspicions regarding the effects of leg angle on yaw stiffness are confirmed.  The yaw stiffness of the tripod increases dramatically as the legs splay out further.  Going even from the common leg angles of 22.5 degrees to 25 degrees results in a 15% increase in the yaw stiffness. 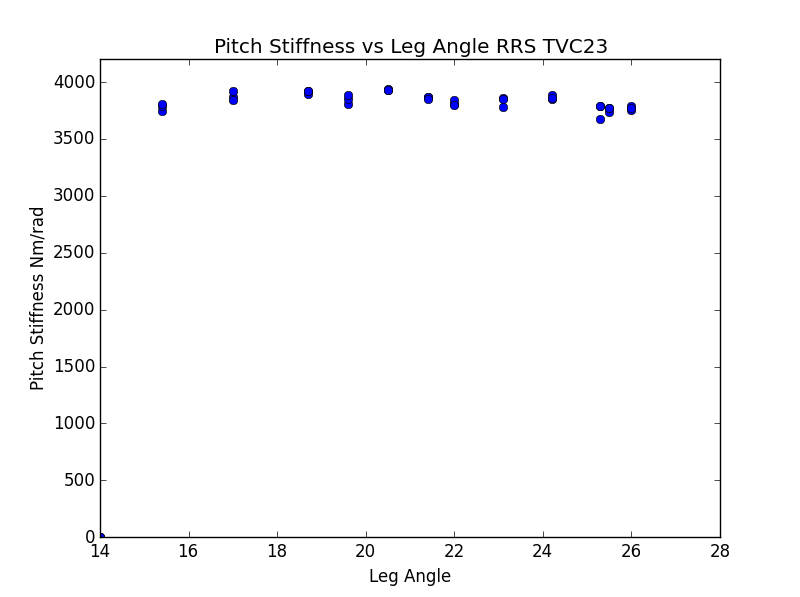 The results for the pitch stiffness are decidedly less dramatic.  There appears to be a slight increase in stiffness as the leg angle decreases, but its difficult to say as differences aren’t that far above the noise level.  If the measured effect here is real, it would be entirely imperceptible in use.  I deliberately let the graph continue all the way down to zero to emphasize how little effect is seen here.  If I were able to test larger leg angles than the native 26.5 degrees on the TVC23, I would expect the stiffness to fall off eventually.  The above data encompasses the entire normal range of values found on tripods for the primary leg angle though, so one would have to be using the tripod with the legs splayed out to a different setting to see an effect.

If we construct the same plot as the first one looking at the ratio of the stiffness with the TVC23 data, we get: 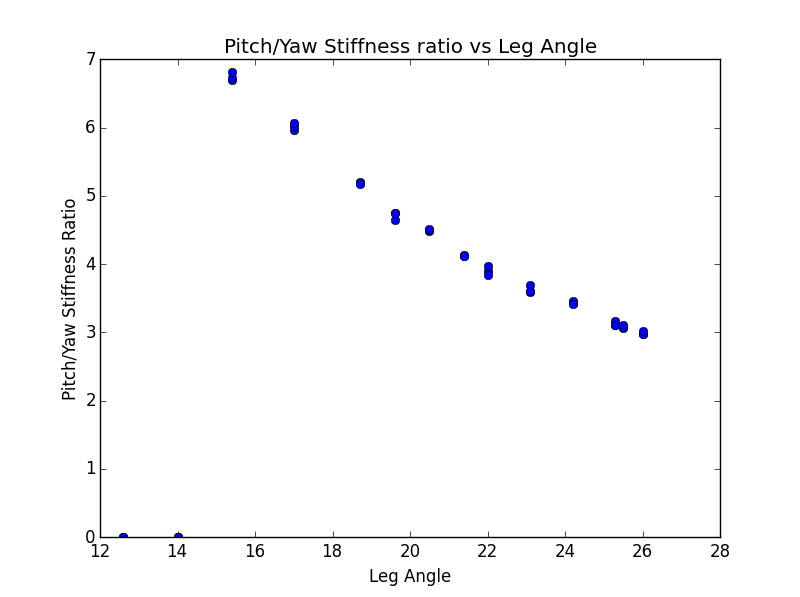 The overall trend is clearly the same, though from the data we know that the effect is dominated by the change in yaw stiffness. 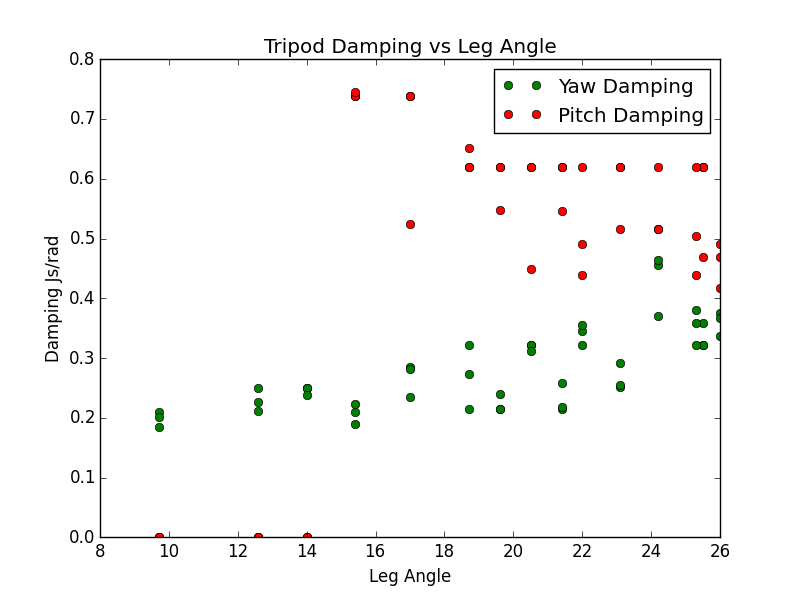 There is some clear structure to the damping data, but not quite as clear as the stiffness.  This is a direct result of the damping measurement being much noisier and that the damping behavior is less linear than stiffness.  At any rate, there is a clear drop off in the yaw damping to accompany the drop off in yaw stiffness as  leg angle decreases.  The difference is not as large though.

The implications here are non-trivial.  Wider leg angle results in better tripod performance.  Clearly there are good reasons to use a narrower leg angle.  A narrower angle improves the height/weight ratio and reduces the overall footprint.  This last point is not inconsequential when using the tripod in confined or crowded spaces such as a studio, busy street, or crowded viewpoint.  The optimal leg angle for a tripod then becomes somewhat subjective.  It depends on the application and preference of the user.  Those looking to optimize performance may want a wider leg angle, while others may want the more compact package of a narrower one.

For me, I prefer a wider leg angle.  For example, lets consider two hypothetical tripods that are otherwise identical except one has a leg angle of 22.5 degrees, and the other is at 25 degrees.  The data above shows that the second one would be roughly 15% stiffer in the yaw direction, which is the weakest and therefore the most critical direction of motion.  Using a little trigonometry, we can see that this second tripod would only be 2% shorter than its 22.5 degree sibling.  That’s a trade off I would happily make.

It would be interesting to see how other tripods perform under the same test.  The results here are so strong though that I doubt the conclusion would be any different.  Tripods are mostly built in the same way.  At some point I also want to test the stiffness beyond the maximum 26.5 degree leg angle if the RRS TVC23.  This will require something more complicated than simply using some aluminum foil shims, such as 3d printing some custom pull tabs.  So that is a project for down the road.