A common complaint that I have seen on the forums regarding ball heads is that the image shifts when locking the ball head up.  This appears to be pretty ubiquitous with all heads exhibiting some level of shift, but I haven’t seen hard data on exactly how much shift there is for any given head.  This is something that is pretty trivial to test, and I am going to add the results of this test to each head review. 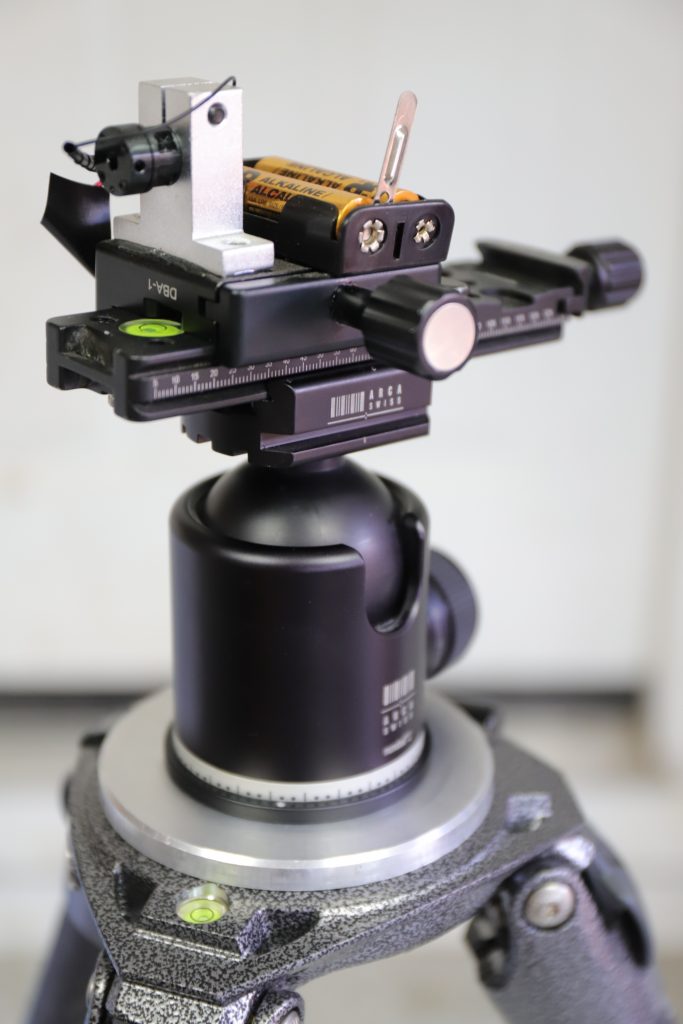 The test setup is pretty basic.  I am using the same Gitzo GT5533LS tripod used for the stiffness test as it is the most stable platform I know of.  This simply minimizes the chance that the tripod gets bumped or moved during the test.  On top of the head is a laser that points to a far wall.  It certainly doesn’t need to be a great laser, but it is useful to have something that is well collimated to provide a small spot size.

The test procedure is also pretty simple.  I loosen the ball head so that it has just enough tension to keep the laser from moving.  I then mark the position of the laser spot on the far wall and tighten the ball lock mechanism, marking the spot position again.  The angle of deflection is thus given by

is the change in the spot position and

is the distance from the center of the head to the wall.  I am implicitly using the small angle approximation here as

is very small compared to

I am measuring the deflection of the head for four different orientations of the ball head so as to average over any asymmetries.  Shifts in the roll direction from the camera’s perspective will cause much less deflection than shifts in the pitch or yaw directions.  Which direction is pitch and which is roll from the ball head’s perspective isn’t constant though, and thus the need to rotate the head between measurements.

The raw data is shown below.  I tested three heads, the RRS BH-55, Arca Swiss Z-1, and Acratech Ultimate.  The lock mechanism for each of these heads is quite different, and we see quite different results.  The Acratech clearly performs the worst of the bunch. 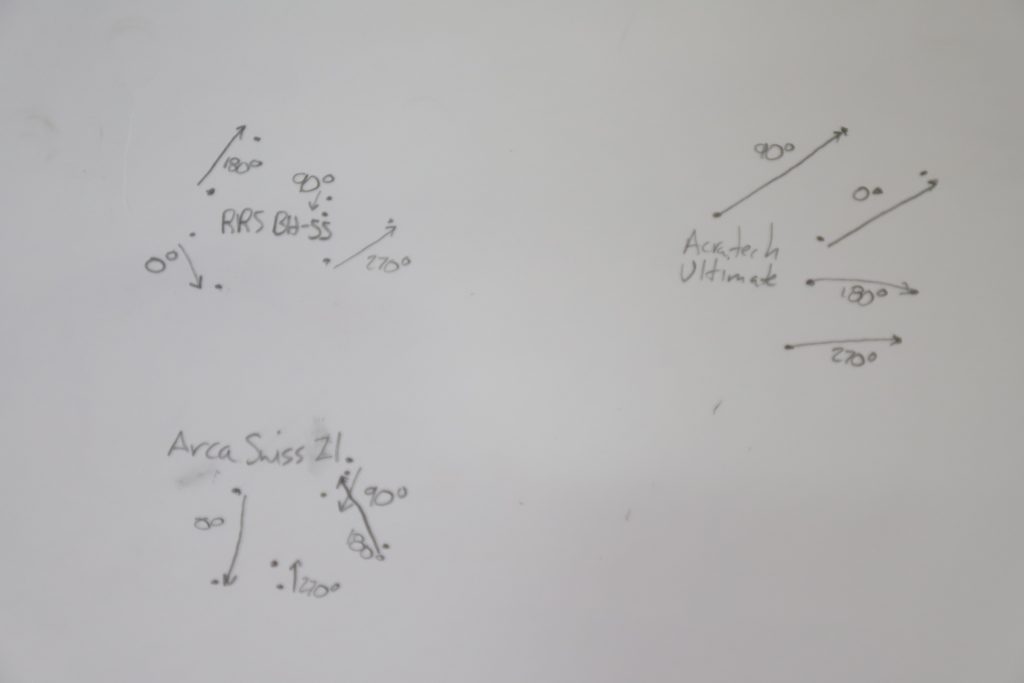 The deflections in mm and the resulting shifts in degrees are presented in the table below.  The ball head center was at a distance of 5.22 m from the wall.

Since I have only tested these three heads, I don’t have a lot of data to put these results in context.  Clearly the shifts are small and would not impact most photography.  In critical situations with telephoto lenses though, they might

There is a little bit of randomness in how much shift occurs on each trial.  I estimate that the amount of shift varies by 25% or so between iterations at the same orientation.  To get a more accurate assessment for each head, I would ideally take 10 trials at each orientation to get an average and standard deviation.  I am not going to do that since it would take too much time.  So, the results will have to be taken with a grain of salt, but should give a decent idea of how much shift to expect, and hopefully identify the worst offending heads.  Look for these results to begin appearing on the review page for each head.

6 thoughts on “Image Shift When Locking a Ball Head”