I am updating the rankings page to incorporate a couple of developments regarding height and stiffness.  Previously on the rankings page, I have reported the yaw stiffness for each tripod, and calculated a rough score metric by taking the stiffness*height/weight.  This was simply the simplest thing I could think of at the time when I first made a rankings page.

The first change I have made is that I now report the average stiffness in the yaw and pitch directions.  While most tripods have a pitch stiffness of about three times the yaw stiffness, there are some that deviate significantly from this.  I have some anecdotal evidence that this is related to the leg angle.  Thus only reporting the yaw stiffness is leaving out some important information.  I am not using a simple average of the two stiffness numbers, but instead the harmonic mean.  This averages the reciprocals and arrives at a much more sensible metric for our purposes.  If the stiffness in the two directions is the same, then mean is just reported as that number.  Say however, the stiffness in the yaw was given by X, and the pitch stiffness was infinite.  A simple mean would report infinity as the average, where the harmonic mean reports 2X.  The harmonic mean is dominated by the lower of the two stiffness numbers.  This is ideal for us where the yaw stiffness is much lower than the pitch stiffness.  The flexibility of the tripod is predominantly in the yaw direction and that is thus where our focus is, but the pitch direction is important as well and thus gets factored into our score calculation.

The second change is in regards to how the height of the tripod is factored into the score.  I have done a study on how tripod stiffness varies with the height of the tripod.  I found that when approximating the stiffness vs height of a tripod, the optimum height exponent to use if only one data point is available is -1.24.  An exponent of -1.4 fit the data better over a narrow range about the maximum height.  To compensate, I am going to use the exponent of height^1.25 in my rankings.  I am going with this this value as it is a nice round number, and more closely backed by the empirical fits to the data.  The adjustment will be less accurate over small changes in height than a 1.4 exponent would have been, but is more accurate over larger changes in height.  Also, it turns out that both of these exponents produce very similar rankings, and it doesn’t matter that much which is used.  So I chose to go the more conservative, less subjective route.

I haven’t touched the weight component of the score metric.  I still simply divide by the weight.  In reality, there seems to be a stronger than linear correlation between the stiffness and weight, as shown in the plot to the right. 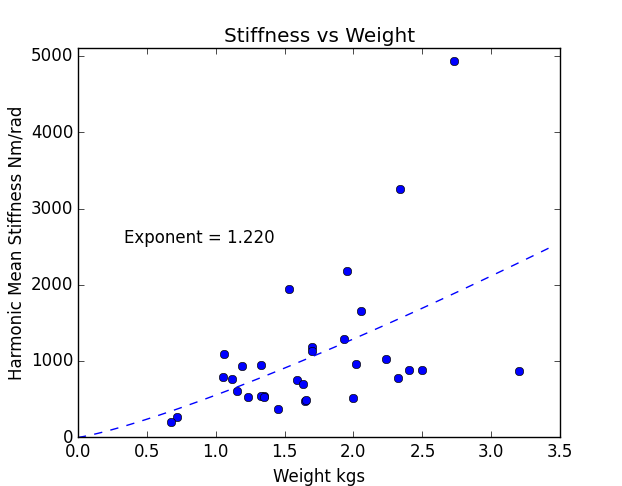 This makes sense.  The stiffness of a tube scales as the diameter^3 but the weight only scales as diameter^1.  Although clearly much of the tripod weight is not in the leg tubes.  When accounting for height as above, we are effectively asking what the stiffness of a tripod with shortened legs would be, given that the only data point we have is the stiffness at the maximum height.  Such an approach makes no sense when applied to weight.  The weight of the tripod is the same no matter how you use it.  We don’t want to completely ignore weight though, as it is very clearly an important factor that matters to a lot of people.  The problem though is that it matters differing amounts to different people.  Thus, I am leaving scaling of the score with weight the same as before, with an exponent of -1, or in other words, simply dividing by the weight.

The full score metric is thus given by:

and for the volume weighted ranking:

These are of course not the only important factors of choosing a tripod.  I am not trying to approximate the utility functions of tripod users, which of course will be wildly different, but provide some simple metric to rank tripod performance.  It should be used as a guideline for finding the best performing tripods, but not used as the sole purchasing decision.  Hikers may value low weight much more than stiffness.  Studio shooters may not care about weight at all.  The folded length of the tripod is critical for travelers.  Price isn’t even addressed here at all.  There is a lot more that goes into selecting a tripod than can be captured in single metric.  I just hope that the rankings page provides a decent starting point.

Edit 1/25/2020:  After reviewing more tall tripods, I have decided that increasing the exponent to 1.5 instead of 1.25 makes more sense.  This is ultimately a pretty small difference and doesn’t affect the rankings all that much, but does help taller tripods out a bit.

One thought on “New Rankings Page and Score Metric”