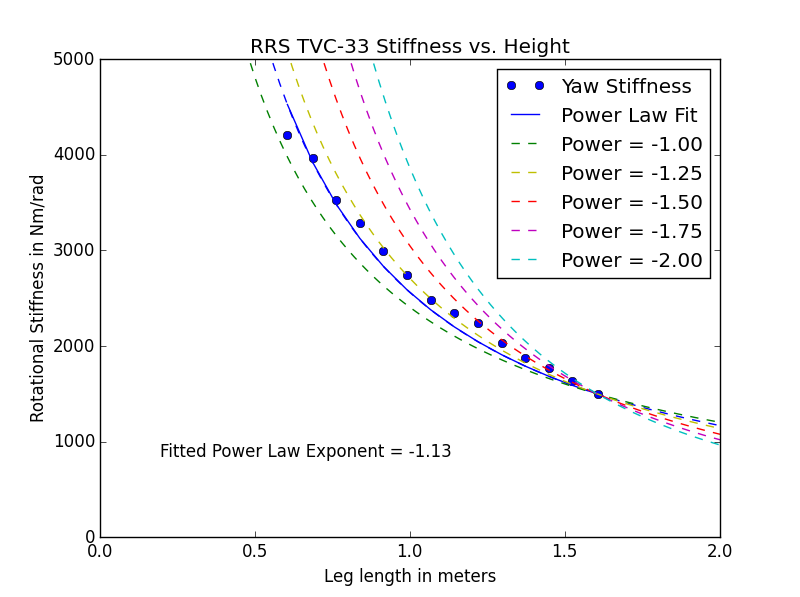 In a previous series of posts, I have laid out the models used for fitting stiffness vs height data, tested the Manfrotto MT055 tripods, tested a bunch of tripods, and compared the stiffness vs height for some very similar Really Right Stuff tripods.  In these posts we learned that we could not fit the stiffness vs height data well with a simple power law, but had to throw in another constant that varied significantly between different models.  This extinguished the dream of being able to accurately approximate the stiffness of a tripod over its entire range simply by measuring the stiffness at a single height.  Yet, that is exactly what I aim to do here in this post.  If we cannot get a perfectly accurate approximation, perhaps we can find one that is good enough.

I simply do not have the time to measure the stiffness vs height for each tripod I test.  As we have seen in this series though, tripods perform much better at shorter heights.  For two tripods that are otherwise identical in construction except for height, the taller one will perform worse simply because it is easier to bend a long beam (tripod leg) than a shorter one.  To construct the tripod rankings score, I thus want a simple metric that rewards taller tripods versus shorter ones.  The taller tripod could of course be used at a shorter height, with a corresponding gain in stiffness, and we don’t want to unduly penalize it just for being tall.  In fact, you may want to reward it for its increased versatility, but I don’t want to assign any value judgments.  I just want to level the playing field in the most numerically backed way possible.

In the previous posts, I fit the stiffness vs height data to some simple functions that best approximated the height over the tested range.  I am going to simplify things further.  I am going to force my fit to go through the data point corresponding to the tallest height, and then fit the powerlaw function:

Now though, $\kappa_0$ is not a free parameter, but fixed the above constraint such that:

So we now have one fewer degree of freedom.  The resulting fit looks like: 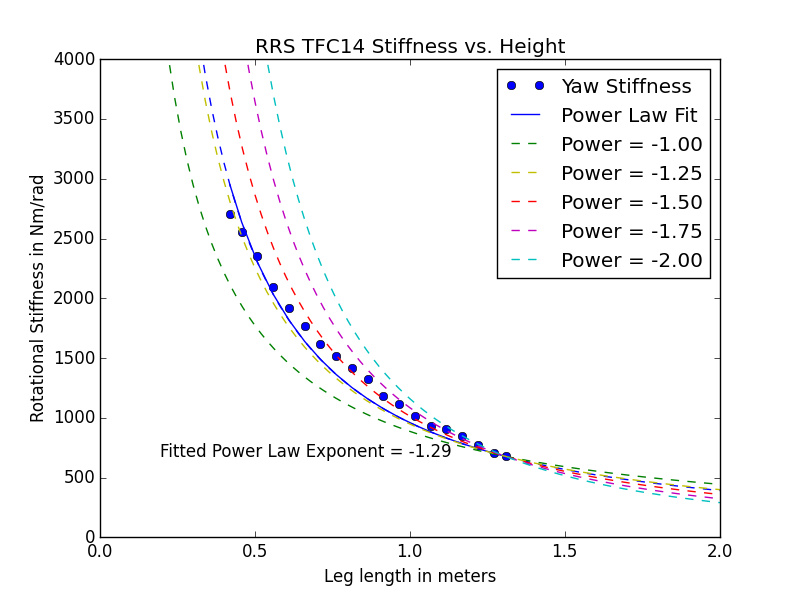 I have added to the graph five curves corresponding to what the fit would look like for a variety of other possible exponents.  All of the curves pass through the point corresponding to the maximum height, as they are constrained to do.  The exponent that creates the best fit to the data, according to a least squares optimization, is -1.29.  However, we can easily see that for the upper ranges of the tripod height, the exponent of -1.50 provides a much closer fit to the data.  This is important because this is the range in which we are more interested in normalizing the data.  We would never care about comparing this tripod to one that is less than 0.75m in height, where the -1.50 line diverges from the data.  However, in a ranking that involves tripods of wildly differing heights, an exponent of -1.50 may be too generous to tall tripods.

Below is a list of the exponent fitted in the same manner as above, for all of the tripods I have data for stiffness vs height.  I also added the exponent for the fit that I felt best approximated the behavior around the maximum height, but diverged for lower heights.

The behavior of these tripods is pretty similar to one another.  The plot generated for each tripod can be found at the bottom of the post.  These averages present lower and upper bounds for what the exponent used in normalization should be, and fortunately, it is a pretty narrow range.  We aren’t going to see massive swings in the rankings based on what exponent is chosen.  If you have thoughts on where in this range the normalization exponent should be chosen, please say so in the comments.  I will be mulling this over before choosing a value to reconstruct the rankings page.

Appendix:  Data to make your own judgement 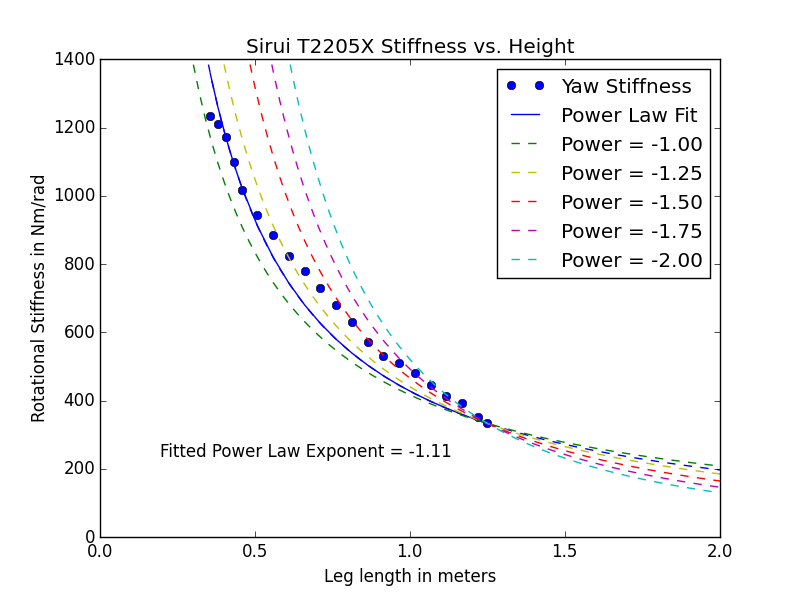 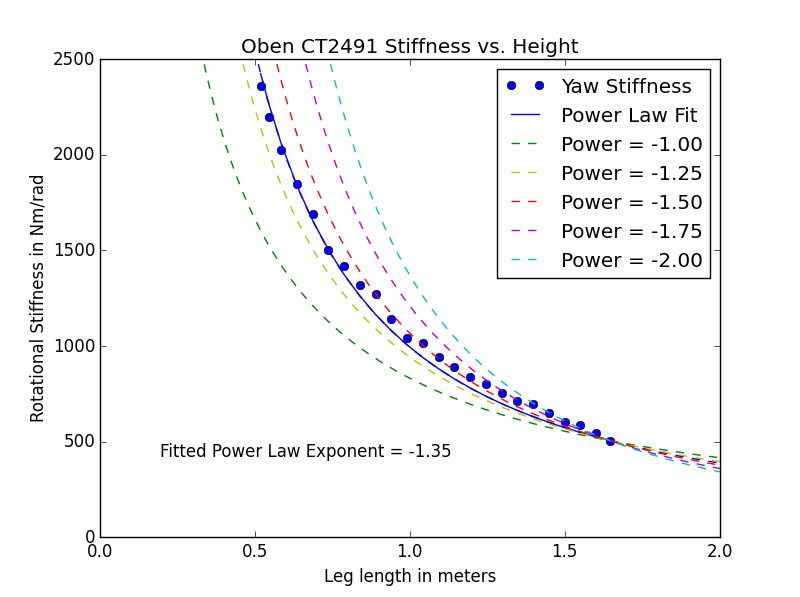 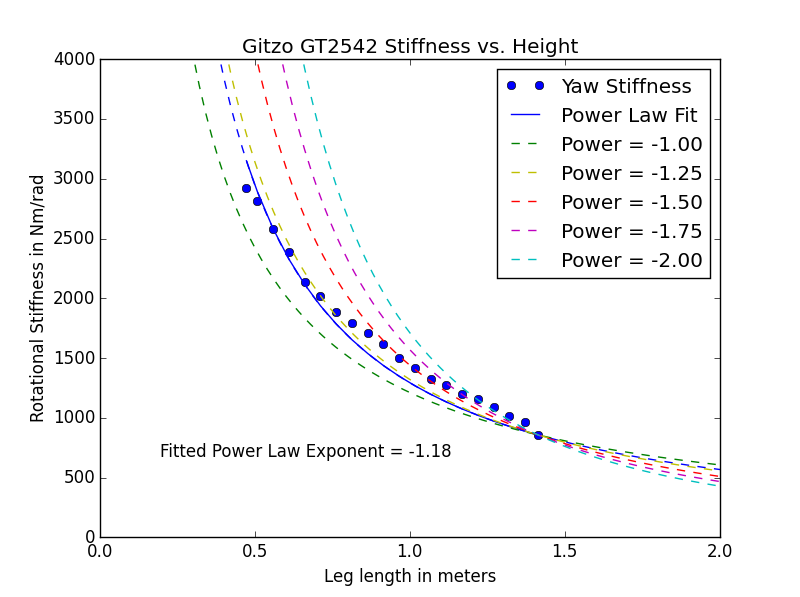 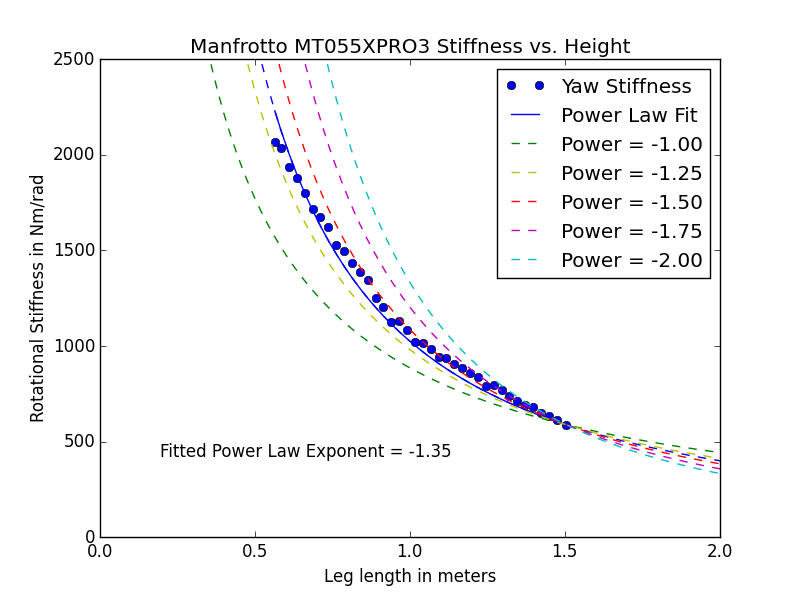 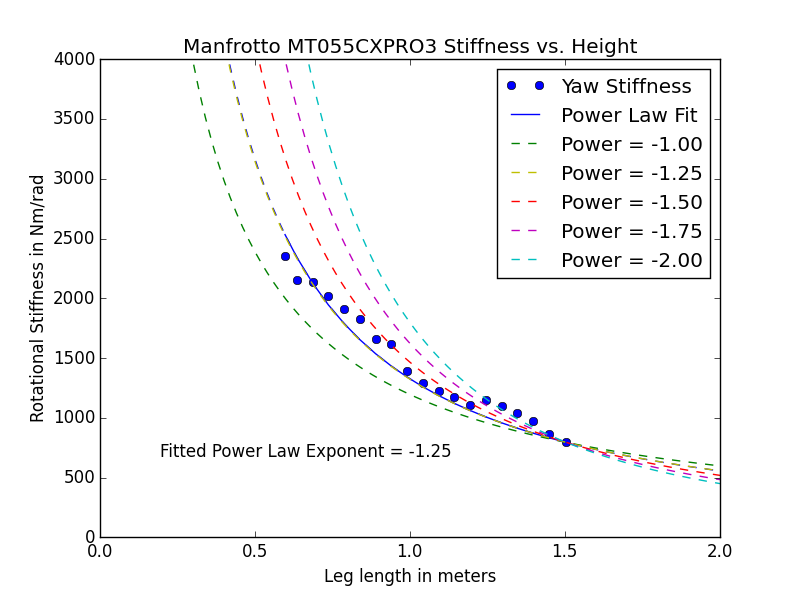 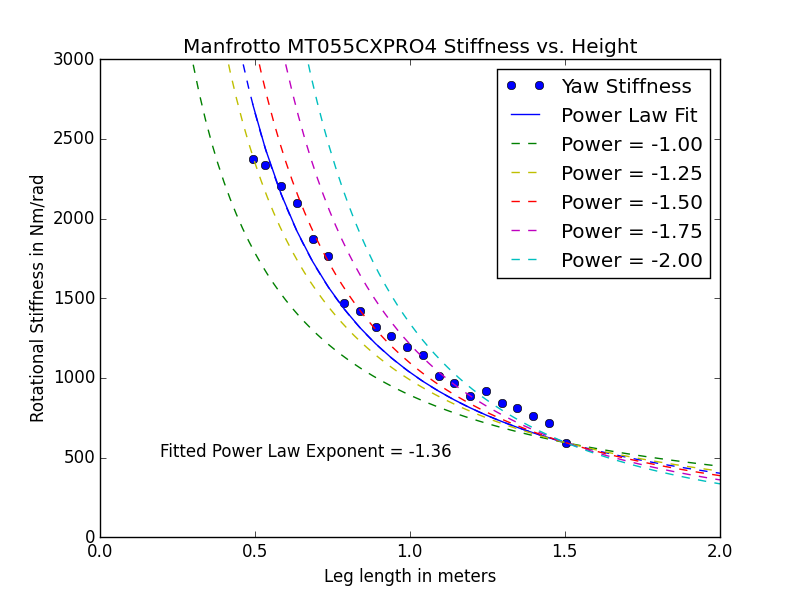 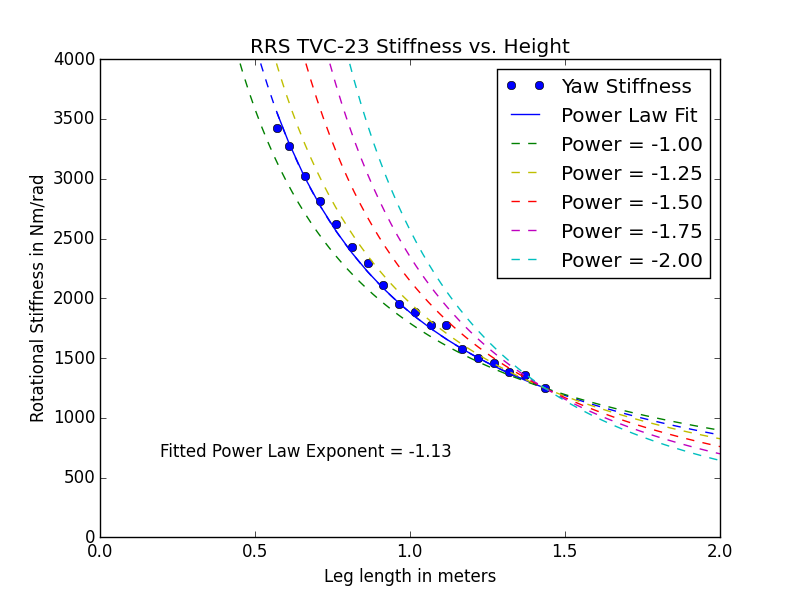 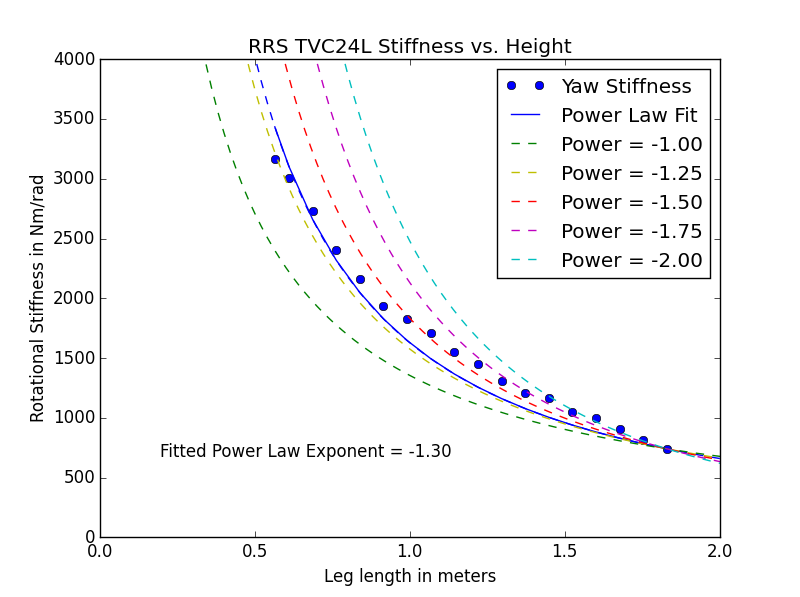 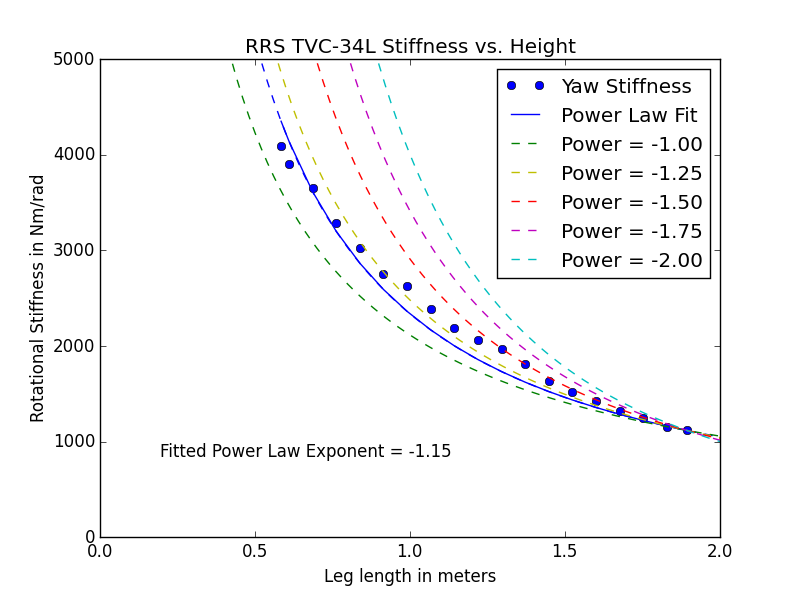