In testing the Really Right Stuff TVC-23, I made the discovery that the top plate material can have a massive impact on the damping performance of the tripod, and a smaller impact on the overall stiffness.  This inspired me to revisit my head testing setup.  It is ideal to use the stiffest tripod possible, but the stiffest tripod I have is the Gitzo GT5533LS, which has too much damping to be effective.  But, what if I could maintain the stiffness and dramatically reduce the damping by using a different top plate?  That is what I am aim to address here. 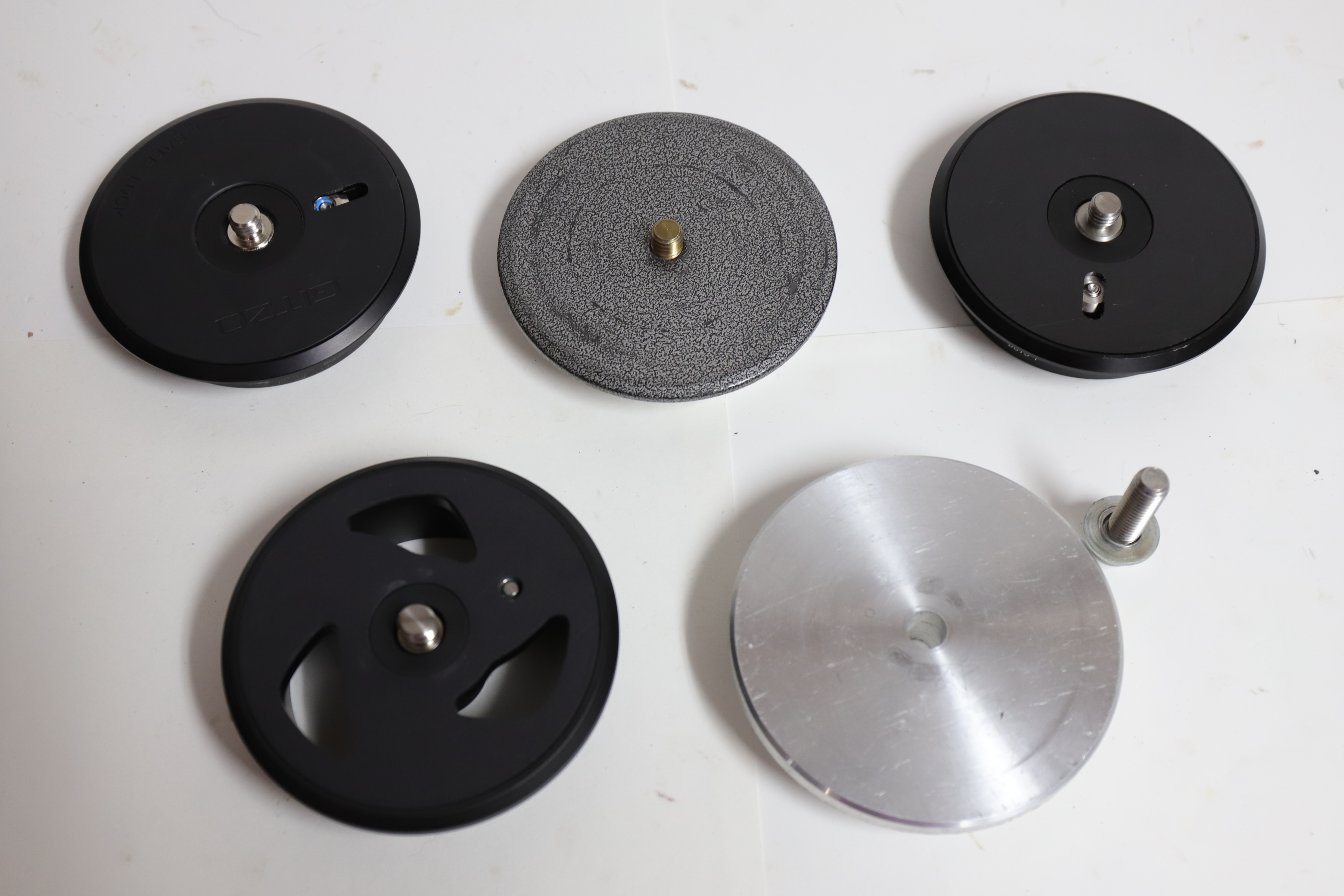 I am going to test the stiffness and damping performance for five different top plates, shown above.  On the upper left is the original Gitzo plate that came with the tripod new.  To the right is an old gitzo plate that has no pad; it is just coated metal.  The top right plate is a Desmond plate, with a set screw and a very hard piece of plastic on top.  The lower left is a LeoFoto plate compatible with the gitzo series 5 tripods.  Like the new Gitzo plate, it has a soft plastic pad on top.  Finally, in the lower right is a custom machined solid aluminum plate with no sort of coating.

The stiffness and damping for both the yaw and pitch directions are shown below:

The differences in stiffness are not particularly dramatic between the tripod plates.  While the differences are statistically significant, they are too small to notice in use.  I don’t see any particular rhyme or reason as to which plates are the stiffest.  I expected that the two plates without a pad would be slightly stiffer, but that does no appear to be the case.  The old Gitzo plate, or perhaps the LeoFoto plate appear to be the stiffest overall, but by a very small margin.

The differences in damping are quite significant in the yaw direction.  We can see that the two plates without a pad had much lower damping than the other three, as expected.  The Desmond plate, with its much harder plastic pad, performed in between the aluminum ones and the softer plastic pads of the new Gitzo and LeoFoto plates.  In the pitch direction, there isn’t a statistical difference between the plates, indication that the damping is occurring in the legs.

The clear choice for testing heads going forward is the custom aluminum plate.  It isn’t different from the old Gitzo plate in terms of performance, but being able to tighten the bolt with a hex key from below is a huge advantage.  It significantly helps with the workflow and prevents the head from becoming stuck onto the top plate.  There is still a decent amount of damping in the system.  Ideally I would build a custom head testing rig out of aluminum or steel, which would have much lower damping.  The Gitzo will do just fine for now though.

Here is some of the raw data used to take this measurement.  We will only be looking at the yaw oscillations.

The oscillation frequencies are all very similar.  The much more noticeable affect is the damping, in which these data have been arranged from least to most.  The only reason that the damping rates are in the seconds scale is that I am using a lot of rotational inertia to make these measurements, similar to the largest telephoto lenses available.  The damping would feel nearly instantaneous for any normally sized camera gear.

So, we have learned that the top plate can have a very significant impact on the damping performance of the tripod as a whole.  This is the first place to look if the tripod has too much or too little damping.  The stiffness was affected slightly, but not in a way that would be noticeable without specialized test equipment.