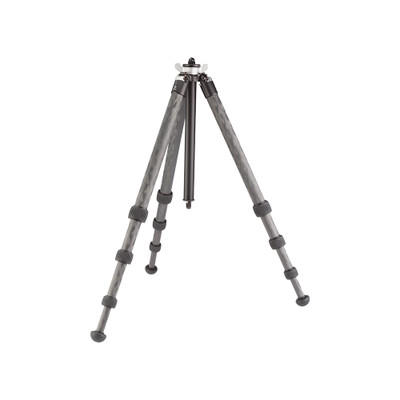 This is part of a series of posts I am doing on the stiffness of tripods versus how far the center column has been raised.  I have previously tested the Gitzo GT2542 and Gitzo GT1545T tripods and found that the stiffness about both axes decreased in a linear fashion to around 55% as the center column was raised to its maximum height.  Both of these tripods have a carbon fiber center column of the same weave pattern as the legs.  The RRS TCQ-14 is different in that it has an aluminum center column and carbon fiber legs.  So, lets take a look at the data: 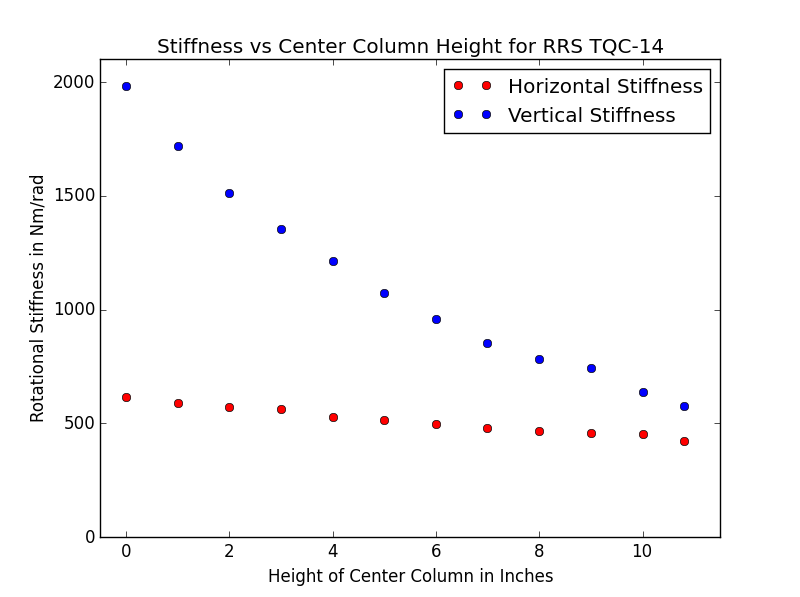 That is a very different result than we saw with the two Gitzos.  Over a pretty substantial ~11 inch extension, the RRS loses only about 30% of the axial (or horizontal) stiffness while losing a whopping 70%  of the radial (or vertical) stiffness.  Given that the axial stiffness is typically much weaker, and therefore the weak link in terms of overall stability, this is probably a good design decision.  At maximum extension, the vertical and horizontal stiffness numbers are pretty similar and should therefore contribute equally to the overall stability.

So why such the big difference between the tripods?  I don’t know for certain, but I am reasonably sure that the reason different performance is due to the aluminum center column on the RRS vs the carbon fiber on the Gitzos.  From Wikipedia:

The reinforcement will give the CFRP [Carbon Fiber Reinforced Polymer] its strength and rigidity; measured by stress and elastic modulus respectively. Unlike isotropic materials like steel and aluminum, CFRP has directional strength properties. The properties of CFRP depend on the layouts of the carbon fiber and the proportion of the carbon fibers relative to the polymer.

The carbon fiber in tripods is designed to resist bending motions of the tube.  This means that it will be weaker in torsional motions (the tube rotating about its central axis).  Thus, for carbon fiber center columns, where the axial rotational stiffness depends on the torsional rigidity of the carbon fiber tube, the stiffness will actually be worse than an equivalent aluminum center.  The stiffness of aluminum is isotropic, and therefore doesn’t depend on the direction of the stress.  Aluminum will still be weaker than the carbon fiber in terms of bending or deflection of the tube, which is why we see the radial stiffness of the RRS TQC-14 drop off so much faster as the center column is raised.

I will explore this hypothesis more as I get the chance to test more tripods.  For now though, it seems that Aluminum is the better material for center columns.